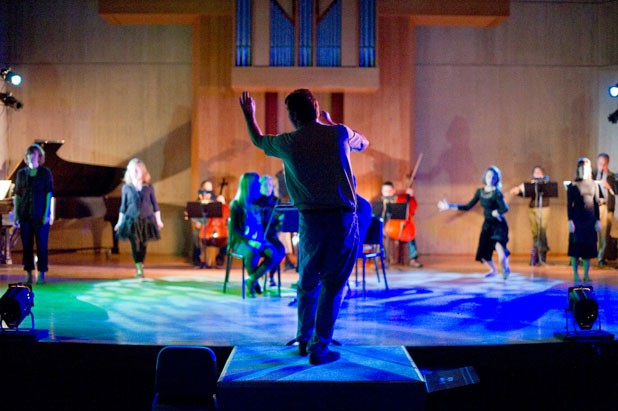 Michael Hopkins’ feet are planted firmly on the stage of the University of Vermont’s Southwick Recital Hall. His arms swing in measured time as he conducts the Burlington Chamber Orchestra through a rehearsal of Aaron Copland’s Appalachian Spring. Lighting designers slowly test a variety of settings, one of which projects a 15-foot version of Hopkins’ shadow on a massive concrete wall. The larger-than-life conductor moves swiftly through the score, accentuating the drama of Copland’s music. Meanwhile, the real Hopkins stops the musicians often to make suggestions about tempo or to correct intonation. The musicians are focused, polite and casually dressed in warm sweaters and jeans.

Hopkins, the artistic and executive director of the Burlington Chamber Orchestra, is rehearsing the BCO for an evening program of his original work Now Winter Nights Enlarge along with Appalachian Spring, set for this weekend. New dances have been created to accompany each performance.

Seated in the hall are Clare Byrne and Paul Besaw, UVM dance instructors who collaborated with Hopkins on the program. Besaw created a dance for Winter Nights, and Byrne took on Copland’s piece, which he originally wrote for modern dance pioneer Martha Graham.

“I knew it was either a great idea or a huge folly on my part,” Byrne says with a laugh. “But it’s really been amazingly fun to do.”

According to the collaborators, no one has ever created a new dance to Copland’s most iconic work. As Hopkins would discover when renting the music from the piece’s publisher, there might be a reason for that.

“Because this is a new dance, we had to get the blessing from the Copland trust,” he says. “You can’t just make a new dance to it without them approving it. It’s one of the legal rights of the copyright holder.”

About a month and a half after making the request, Hopkins was granted the green light to work with Byrne on the new dance. But when the scores arrived, he encountered another surprise.

“There were about a dozen or so major discrepancies between the music I had heard and what was in the score,” Hopkins says.

He discovered that Copland had cut out parts of the ballet score when he arranged it as an orchestral suite for a full symphony orchestra. The original music was written for a 13-piece chamber orchestra and featured little-known music that develops following the composition’s most famous section, the theme and variations on the folk song “Simple Gifts.”

“In the notes to the score, Copland describes these sections as ‘only of choreographic interest,’” Hopkins says with a grin. “But I think a lot of people who will be in the audience and know this music will find the original score very interesting.”

The BCO rehearsal is the first time Byrne and Besaw have heard the music performed live. Besaw developed his dance with a MIDI recording provided by Hopkins, and Byrne used audio that was extracted from a video of the Martha Graham Dance Company performing the original ballet.

“It’s amazing to finally hear it,” says the diminutive, wide-eyed Byrne. “I can hear where I’ll need to make a few adjustments.”

Besaw agrees. “I’m actually a little nervous,” he says, chuckling. “I’m not sure why. But hearing it live, with the people onstage, makes it a little more real.”

After a short break, Hopkins leads the orchestra through Now Winter Nights Enlarge. The music is remarkably of the season; in one passage, the bass, piano and cellos churn through dark, turbulent themes, while the violins and violas sweep over them with icy tension.

Onstage, the orchestra is arranged in an unorthodox format. Besaw wanted his four dancers to perform in and around the musicians. He worked with Hopkins to position four violins in the center of the stage, with two more standing at far stage left and right. The piano sits to the back of stage right and the woodwinds stand at the back of stage left.

“One of my cellists called to ask if he needed to put some of that yellow police tape around his instrument,” Hopkins says, only half-joking. “Everyone in the orchestra plays a very expensive instrument.”

“The dancers will be so aware,” Byrne says with an assuring tone. “Dancers have expensive instruments, too,” she chides.

Lida Winfield, Autumn Barnett and John Bennett are all dancing in the evening’s program and are seated nearby during the orchestra rehearsal. Winfield points out how Besaw’s dancers have created a masking-tape grid on the stage around the central violins — a guide for their dance. Bennett, also a trumpeter, marvels at how complex Copland’s score is. For her part, Barnett revels in the collaborative spirit the project has created.

“Usually, dancers get to collaborate with the choreographer. The musicians work with the conductor,” she points out. “But this time, we all get to share the experience of creating this as a group. That’s the most amazing thing to me.”

During a break, Hopkins takes a minute to reflect on the rehearsal and the months of work leading up to this moment.