Son Little on Working with the Roots, RJD2 and Mavis Staples 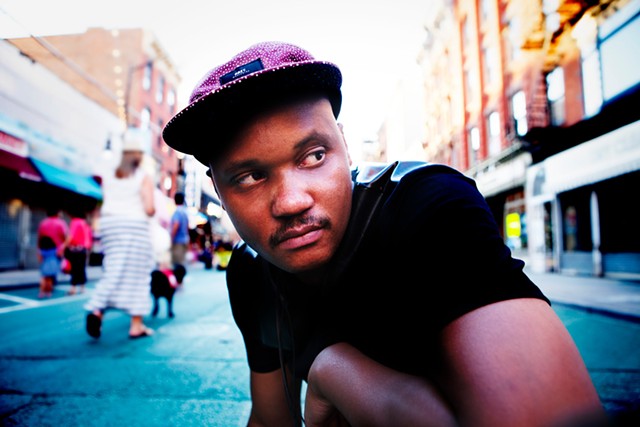 In a 2015 interview with music blog Sound of Boston, neo-R&B artist Son Little was asked to describe his sound without using genre descriptors. He came up with "futurist talking drum." Though it sounds like hot nonsense, the description does hold water. His songwriting is rooted in classic R&B, blues, and rock and roll. But ultramodern production, including the liberal use of vocal processing, hefty synthesizers and drum machine, brings his music into the 21st century. As for "talking drum," Little's songwriting often begins simply with a beat.

Born Aaron Livingston, his moniker derives from a play on his surname. After a friend repeatedly mispronounced it "Littleson," Livingston became Little Son and evolved into Son Little when he decided to pursue music as a solo artist.

Though Livingston was born in Los Angeles and came of age in New York City, the multi-instrumentalist started his music career while attending Temple University in Philadelphia, the city he now calls home. During his college days, a chance encounter at a recurring jam session set Livingston on a path to musical prosperity. He's written songs for Mavis Staples, produced for hip-hop artist Hezekiah and worked with RJD2 on a joint project called Icebird. This was all after making his debut appearance on the Roots' 2004 record The Tipping Point. He released his self-titled debut album in 2015 on Anti- records.

Son Little and his band perform on Friday, January 27, at Signal Kitchen in Burlington. Howard and locals Bleach Day add support. Seven Days recently caught up with Livingston by phone.

SON LITTLE: I'm working on album two right now. I'm in LA this week, doing some writing for a bunch of different people. No real plan for what it's for. I'm really excited to delve deeper into some of the relationships I've forged in the past couple of years. Because I was touring so heavily, there really wasn't much time to develop anything beyond maybe a song here or a song there.

Famous last words here, but I'm hoping that between when the record is done and touring to support it that I'm able to do some of that kind of stuff. I'm hesitant to believe that that's possible.

SD: When Seven Days interviewed Mavis Staples in 2015, she had a lot of great things to say about you. How was that experience for you?

SL: What I'll always remember is that, when she got up to sing [in the studio], she said, "Are you coming?" I said, "Coming where?" And she brought me into the vocal booth with her. I stood there, holding her hand while she tracked the vocals. The first note that she sang — you wouldn't expect a sound like that to come out of someone that small. I jumped, because I was so startled. I could never forget that. It's just an amazing gift that she has, both her voice and her personality and her energy that she gives off. It's really incredible and powerful.

SD: How did you originally connect with the Roots?

SL: When I think back to it, it's kind of confusing to me. I had moved to Philadelphia and was going to school at Temple [University]. A lot of the people involved with the Roots are also affiliated with Temple. A friend of mine told me, "You've got to come out to this jam session." At the time, I was playing quite a bit of bass.

I was at one of these jam sessions, and the bass player got tired. I volunteered myself. A lot of times at these jam sessions, people switch off while the music was still going. While I was playing the bass, I looked up and Questlove was on the drums. I was blown away by that. I [then] met Richard Nichols, their longtime manager, who passed away a couple years ago.

A lot of things with that group happen very organically. They're really good at fostering new talent. I don't know where I would be without that relationship, with [Nichols] especially. They really encouraged me and helped me build confidence in what I was doing.

SD: What are some things you've learned from working with other artists?

SL: One thing I really enjoyed about [the Icebird project] was the fact that [RJD2] was very open to me interpreting it, taking things away from it ... reimagining parts of it. There's something to be said for the ability to make wholesale changes in things, or to start completely over. That's a major part of the process for most of the people I've worked with — holding onto the possibility that there might be a different way to do something.

SD: Your most recently released song, "All Wet," is actually an older song, correct?

SL: Yeah, a little bit. It was this song that we'd played a lot of times, and it felt wrong that it wasn't out there for people to listen to. When it came time to decide what was going to be part of [Son Little] and what wasn't, it just didn't quite fit in there for me.

At the same time, we were gigging pretty hard, [and] we were playing it all the time. I think there was video footage of us playing "All Wet" at [the University of Pennsylvania radio station] WXPN, but I never told them the name of the song. When they put the video up, it said "Untitled" on it. We were in London at one point, and this guy at the back of the room yelled out, "Play 'Untitled'!" I thought he was talking about the D'Angelo song.

SD: It goes without saying that 2016 was a tumultuous year. Did any events of 2016 inspire any songwriting?

SL: I find it really difficult to write on the road. As hard as I may try to get writing stuff done, I wasn't able to do much [in 2016]. One of the ways I cope with my existence is writing things down and getting my feelings out that way. Being on the road so much, and not having the comfort of home and being in the studio, made it very difficult for me to emotionally deal with what was happening.

In August, when we came home [from tour], I had one song. At the end of October, I had 10. I think everything I've written in the past couple of months is sort of colored by the experiences of the past year.

SD: Will any of those songs appear on your next album?

SL: Some of them, absolutely.

SD: What's something you could never live without? And it can't be related to making music.

SL: I like to figure stuff out. This might be a weird answer, but: hunger to understand stuff. Puzzles. Maybe not a literal puzzle, but sort of ... questions to be answered.

The original print version of this article was headlined "Collaborative Efforts"