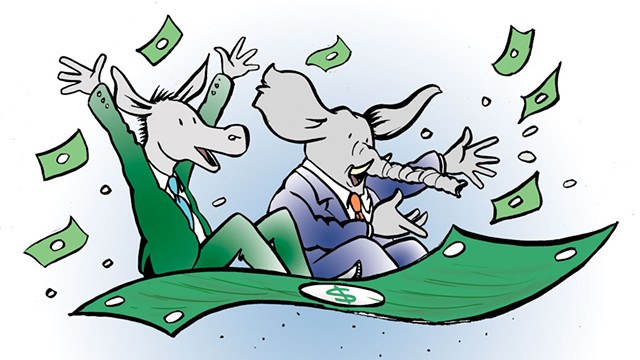 There are two kinds of money around the Vermont Statehouse: state and federal. State money is always in short supply. Do we spend it on the University of Vermont and the state colleges, raises for underpaid workers at our mental health agencies, or public assistance for people with disabilities? Do we set it aside for retiree pensions and health care? A dollar devoted to one of those worthy causes is a dollar less for the others. The decisions are difficult.

Federal dollars, on the other hand, seem a lot easier to spend. When more than a billion of them flow into Vermont to help the state weather the COVID-19 crisis — and a second billion-dollar bundle shows up less than a year later, there's a temptation to start dancing to the 1998 Squirrel Nut Zippers tune "The Suits Are Picking Up The Bill."

The federal largesse meant Vermont could spend millions of dollars to help pandemic-ravaged businesses stay alive. Sounds good, right? But it also appears that millions have been sent to not-so-ravaged businesses that, when they added the government aid to their balance sheets, ended up doing better in the pandemic year 2020 than in 2019.

With Gov. Phil Scott's administration pressing lawmakers to send another $50 million to businesses before the legislature adjourns next month, state Auditor Doug Hoffer last week did something he had never done before: He shared data with lawmakers in advance of releasing an audit report. He said the report will show that some of the taxpayer-funded coronavirus relief money doled out last year went to businesses that didn't need it.

Hoffer looked at just a sliver of the pie: 57 of almost 2,800 businesses and nonprofits that got a share of $131 million in grants from the Agency of Commerce and Community Development. The Department of Taxes spent another $190 million through a similar program. Hoffer's list included the 27 businesses that got the largest grant available: $300,000.

Of the entities he reviewed, Hoffer said, "38 of the 57 businesses ended up better off at the end of 2020 than they were at the end of 2019. So it's not as if people came up short. The idea of this program was not to enrich, [but] that's exactly what happened."

A key reason the program ended up being overgenerous in some instances was the way the aid was calculated, Hoffer said. Businesses were invited to tally their need simply by reporting how much their revenues were down in the seven months from March to September 2020 compared to the same period in 2019. But looking just at revenue declines didn't account for how much they were able to cut costs.

"If you're a manufacturer and you get shut down, then if possible, you're going to reduce the inflow of inputs to your business," the auditor said. "If you're not making widgets, you don't need widget parts." He argued that a much better measure of the negative impacts on businesses would have come from looking at their "net operating income," essentially revenue minus expenses.

You can't really blame businesses or nonprofits for taking free money when the government is handing it out. tweet this

Hoffer said his office checked monthly profit-and-loss statements and used net operating income, rather than simple revenue changes, to check how businesses had fared from March to September of 2020, versus the same period a year earlier. By this method, 16 grant applicants demonstrated no need at all. But they got a combined $3.7 million anyway.

Sen. Michael Sirotkin (D-Chittenden), chair of the Senate Economic Development, Housing and General Affairs Committee, said in an interview that since Hoffer looked at just 57 of the 2,800 grant recipients, the actual amount of money handed out without need surely was much larger.

You can't really blame businesses or nonprofits for taking free money when the government is handing it out. The auditor is merely saying that the government should hand it out more carefully and make sure the need is real.

The U.S. Congress approved another big pandemic relief package in March, and Vermont is about to be showered again with more than $1 billion. But there's a key difference: The first $1 billion-plus had to be allocated by the end of December 2020. States now have until 2024 to spend this newest batch of money. Both Hoffer and Sirotkin say it would be wise to slow things down a bit before honoring the administration's request for another $50 million in business grants.

"We're supposed to be the branch of government that spends the money, and we're given a proposal with literally hours or days to say yes or no ... and with little staff being able to redesign or look at it," he added. "It's very challenging, to say the least."

But hey, a cynic might say, it's federal money, so what's the worry? The suits are picking up the bill.

Hoffer's argument is that money is money no matter its source, good uses for it eventually will exceed even today's largesse, and state officials always have a responsibility to spend it wisely. As much as the Zippers are a load of fun, I agree.

What's in a Name?

A proposal to name a large state office building in Montpelier for the late governor Philip H. Hoff appears to have stalled due to the opposition of one lawmaker. And if it ever clears that hurdle, it could face another: criticism of Hoff's participation in an annual long-ago racist event at UVM.

"I have real concerns about opening up the capitol complex to naming buildings," House Corrections and Institutions Committee chair Rep. Alice Emmons (D-Springfield) said of a proposal to affix Hoff's name to 133 State Street, the stately stone building just west of the capitol. Emmons, whose committee oversees state buildings, has declined to take up the matter.

"I can just see a political feeding frenzy for naming buildings," she said. "It would become a competition ... between which party has more of those buildings named."

Hoff, who in 1962 became the first Democrat in more than a century to be elected governor of what was then the solidly Republican Green Mountain State, was a pivotal figure in developing the modern State of Vermont. "He was the most influential governor of the 20th century, and that includes George Aiken and me," former governor Howard Dean, who served from 1991 to 2003, told Fair Game. "He just fundamentally restructured Vermont in ways that I don't think any other governor since Thomas Chittenden has." (Chittenden was Vermont's founding governor in the late 18th century.)

In addition to creating new state programs and agencies, including the Governor's Commission on the Status of Women, and overseeing the transition of the Vermont House from one member for each municipality to proportional representation, Hoff was recognized as a national leader on civil rights. He appeared on NBC's "Meet the Press" in 1964 as a counter to segregationist and Alabama governor George Wallace in a discussion of the new Civil Rights Act. He later joined New York mayor John Lindsay in starting the Vermont-New York City Youth Project, which brought more than 1,000 minority students from the city to the Green Mountains for summer programs.

But Hoff also had a blemish on his civil rights record. More than once as governor, he attended Kake Walk, an annual winter celebration at UVM that featured white students in blackface doing a strutting dance rooted in the days of slavery. It was a major social event for the school and the surrounding community at which fraternity brothers competed for trophies and a cake.

Even in the 1960s, there were growing criticisms of the event's inherent racism. Hoff eventually joined calls to abolish it, which finally happened in 1969. Now the event is universally deplored. Curtiss Reed Jr., executive director of Vermont Partnership for Fairness and Diversity, said in a recent interview that Hoff's attendance should disqualify the man from any consideration that a building be named after him.

Hoff's daughter Dagny Hoff, who lives in Montpelier and is retired from a career in human services, said she was disappointed by Reed's comment. "Times were so different. At that time I think there was a lack of understanding about the implications of Kake Walk," she said. Her father was "revolutionary" in his time for pushing for equality and recognizing the value of all people. She added that she would be glad to see a building named for him as "an acknowledgment of the work that he did, and I think he did an amazing job."

Here's the thing: If America is ever to defeat racism, white people have to change. Hoff brought not only huge external changes to Vermont's politics and government structures, he did the likely harder job of changing within himself, from attending Kake Walk to calling for its abolition. He modeled the internal change many white people still need to make today. It also took more courage — and was more politically costly — to oppose Kake Walk in 1968 and '69 than in 2021.

I get Emmons' reluctance to start naming buildings after politicians. But Hoff was more than a politician; he was a pioneer. It might just be a healthy civic exercise to show we can still name stuff after pioneers.