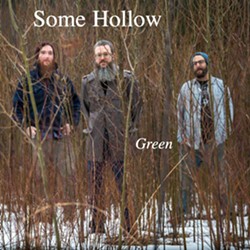 Look, I like cheese. Ask anyone I go to lunch with. My music tastes are no different. I can dig some truly cheesy shit. I've been to a Better Than Ezra show, and not only did I genuinely like it, I still retroactively think it was cool. I don't hate the Gin Blossoms in any way, shape or form, and I finally feel OK admitting that publicly: I don't hate the Gin Blossoms, you guys. Now piss off!

Sorry. I'm just trying to establish my ability to stomach the saccharine and eye-rolling cliché lyrics and aesthetic of '90s kinda-rock. Because for all of that, I just can't quite get behind what Vermont's Some Hollow are playing on Green.

The EP is the group's first after forming last year. Some Hollow aren't a bad band by any means. Front man Jason Lee has a distinctive, evocative voice — not to mention the ability to pen a sugary hook. Drummer Josh Morse holds it down well. And whenever Aidan Lenihan chimes in on the pedal steel, it is incredibly lovely.

But Some Hollow have also managed to make an album that panders to some of the most nauseating aspects of pop music. Green's five songs all go straight for the gooiest part of the heart. Any one of these tracks could find itself on a CW network show and be just fine. That's the sort of territory Some Hollow stray into here, and I just can't forgive it.

"Roses are red, violets are cool / I'm just so happy being here with you," Lee sings on "Roses," the album's third track. And that's where I gave up trying to find positives in the lyrics. The writing is just so heart-on-sleeve, not to mention unimaginative, that the effect is to cheapen Lee's genuinely excellent voice. That's at least true on the EP. When I saw Some Hollow live a little while back, they had what seemed a more experimental side than what they present on record.

If Some Hollow are shooting for mass appeal, then certainly there are positives to the EP. The production is crisp, and the band is easily able to handle the arrangements. If the band's songs are cheesy, they're equally catchy, so it wouldn't surprise me to see them get some radio play. And that in itself is respectable. This brand of pop is startlingly hard to write and play, requiring a balancing act of art and commerce. So I salute the band for being able to do it. Yet none of that will make me love Green.

Download Green by Some Hollow at somehollow.bandcamp.com and see if I'm just being an icy-hearted curmudgeon.

Speaking of Some Hollow, Green