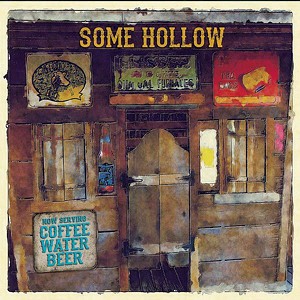 About three years ago, I tore Some Hollow a new one. The Burlington indie pop-rock band's debut EP, Green, hit me like a stray fart, and I put them on blast. As I'm the one ripping apart musicians just trying to make music, I'll go ahead and take the hit as the villain. I'll be Magneto here. And, just like the X-Men archvillain, I reserve the right to change my spots.

The band's debut had plenty of promise and industry, but everything was so saccharine that it could have given Wilford Brimley diabetes all over again. That's harsh, but Green inspired some tough love from yours truly. Yet Some Hollow came back for more, submitting their new full-length record, Coffee, Water, Beer, to Seven Days and specifically requesting that I review it.

And, well, you have to respect that. Because there was a good chance singer and guitarist Jason Lee, bassist Jim Hamel, and drummer Josh Morse were just setting themselves up for another burn session when they smashed "send" on that email.

"Small Time Smugglers Town," the LP's opening track, had me properly worried I was going to have to be a bastard again. It's jaunty but utterly forgettable and lyrically limp. As writers, Some Hollow aren't big on subtext. Take, for instance, this line from "Downtown," the second track: "Went downtown to play a show / With Josh and Jim and Some Hollow / Man, we really laid it down / right in the middle of downtown." Lee sings this with all the emotional depth of a man reading a bus schedule.

However, a curious thing happened as the album went on. With additional listens, the band started catching me with its hooks. The laid-back, late-night funk of "Every Single Day" didn't feel like anything I had heard on Green. Lee's voice shone amid the outlaw country feel of "Worried Man." There were interesting sonic tweaks happening during the songs and an added layer of sophistication to the writing. "Meetings" even delved into They Might Be Giants territory, with tongue-in-cheek, irreverent humor and some killer saxophone breaks courtesy of Swimmer's Matt Dolliver.

The band itself was never the problem, and Some Hollow's tightness, honed over years of gigging, is impossible to miss. The difference on Coffee, Water, Beer is that the trio is starting to put out songs that use those chops in interesting ways. It has also incorporated a couple of ace guest musicians, including Pappy Biondo on banjo and guitarist Dan Rahilly, both of whom serve up tasty work. The overall result is a pleasant, interesting record that hits several high-water marks for the band.

Judging by Some Hollow's fearless response to an early pummeling, the band's confidence and future are both trending upward. Coffee, Water, Beer is streaming now on Spotify.