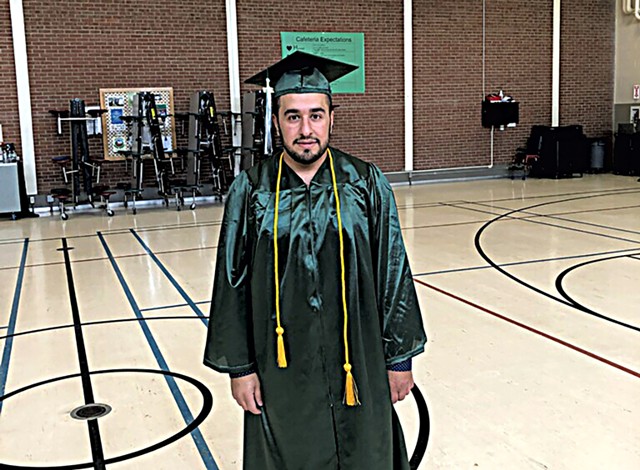 When Usamah Abdulkhaleq, 28, stood onstage wearing his graduation gown and a gold honor cord to receive his diploma at Winooski High School in June, his eyes were only on his mother.

"For four years, I suffered," he recalled. "I was so proud that I made her happy."

When he was 16, Abdulkhaleq and his family fled their native Iraq to seek refuge in Syria. They lived in Damascus for about seven years before war broke out there. The family returned to Iraq and was resettled in Vermont in 2014.

During his turbulent years in Iraq and Syria, Abdulkhaleq had to forgo schooling to work and support his family. "I wasted almost 10 years," he said ruefully.

In September 2014, Abdulkhaleq enrolled at Winooski High School. Not only did he have to juggle school and his full-time job at a gas station, but he also had to deal with skepticism from his community.

"'There's a lot of people before you [who] tried. They did it just for one year, and they dropped out,'" said Abdulkhaleq, recounting what others told him. But he was determined to earn a high school diploma in four years.

According to Vermont's state statute, any resident who hasn't earned a high school diploma has the right to attend a high school. The state is unusual in that respect; most others age students out, usually at 21.

This provision gives refugees and immigrants the opportunity to earn a high school diploma and the better employment prospects that come with it, either because they've had to interrupt their formal education or because they have qualifications that aren't recognized in the U.S.

While there are other ways to take ELL classes or earn a diploma, many adults want to have the immersive experience of being full-time students, Kollgaard said: "They know they're going to learn English quicker if they're surrounded by it all day than if they're taking a three-hour class."

Abdulkhaleq said he sometimes felt awkward with classmates who were his juniors by about a decade. Some mistook him for a teacher or an interpreter. In his particularly challenging freshman year, when he spoke little English, he did his homework whenever he had free time during his evening shift at the gas station.

Some of his adult Iraqi classmates dropped out of school after the first year, but Abdulkhaleq persevered. He singled out ELL teacher Bill Clark for his constant support and motivation.

"I hope all teachers do that with students like me," Abdulkhaleq said, "because if we feel like people don't accept us or appreciate us being there, we're not going to make it."

In his junior and senior years, the Iraqi native also took early college classes at Community College of Vermont, where he made friends with students closer to his age. When he graduated in June, he received the Bill Everts Memorial Scholarship, given to a senior who is the first in their family to go to college. He plans to continue working as a taxi driver and earn an associate's degree at CCV before transferring to a four-year university.

Adult students tend to have motivation, clear goals and a mature attitude, said Marina Brzostoski, who's been teaching English language learners at the Center for Technology Essex since 2010. She's seen an increase in the number of adult English language learners who want to learn a trade and earn a high school diploma at the same time. "They team up and help each other," she noted. "They're my best students."

While some immigrants may attend school in the U.S. so that they can help their children with their homework, she said, others pursue higher education to seek a profession similar to what they did in their native country, or to realize a dream. 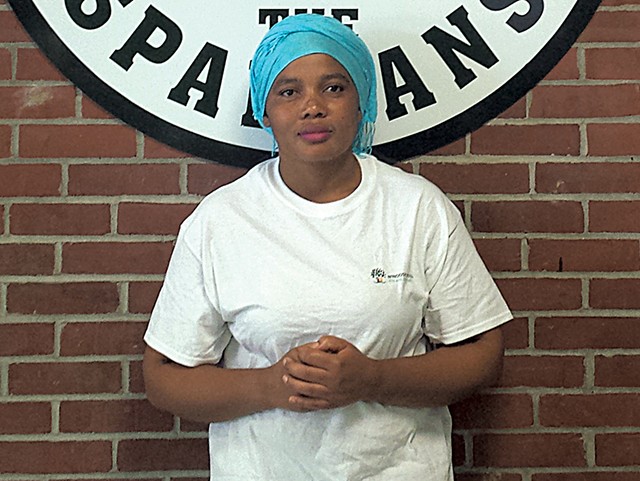 One such student is Hadija Uwizeye, a mother of five, who aspires to be a registered nurse. Uwizeye, 31, said it was difficult for her to attend school as a refugee in Tanzania. Frustrated at the lack of progress she was making in her community English class, the Congolese native decided to enroll at Winooski High School last year.

Like Abdulkhaleq, she has faced skepticism from some members of her community. "They're talking too much, but I don't care," said Uwizeye. "I'm excited to do this."

Her favorite place in school is the library, because it's quiet. At home, her children sometimes help her with homework.

Her grit has borne fruit. She no longer needs an interpreter to help make medical appointments, and she found, applied for and obtained a full-time position at Koffee Kup Bakery on her own. "If you go to school, you're different from other people who didn't go to school," said Uwizeye. "I want to make my life [easy]."

Since she started high school, at least two women in her community have asked her about her experience. "I tell them it's better to go back to school," said Uwizeye.

But this school year may prove challenging for Uwizeye because of her full-time job at Koffee Kup, and in that obstacle she's not alone.

According to Kollgaard, over the past five years, the number of adult English language learners in her district has ranged between 20 and 40. Some, like Abdulkhaleq, go on to graduate. Others switch to programs offered by adult education and literacy organizations that offer more flexible schedules; still others drop out.

The demands of a full-time job often factor into that decision. The students who can balance school and work are those who have a lot of support and help from their families, noted Brzostoski.

One of them was Zeynab Kouyate, a Guinea native who moved to New York City in 2011. She relocated to Vermont four years later after learning about the state's education and employment opportunities. Her three-year degree from Guinea is in French, making it difficult for her to find a high-paying job in the U.S., she said.

Kouyate attended English clas ses at Sara Holbrook Community Center in Burlington's Old North End for about a year. The single mother remembers waking up at 5:30 a.m. so she could catch the bus, take her daughter to a daycare center in the South End and make it back in time for class at 9 a.m.

After she attained a ninth-grade proficiency level in math, reading and writing, Kouyate enrolled in the High School Completion Program, which she finished in about two years. There were times when she felt so overwhelmed with school, work and family that she cried, Kouyate said. But she rallied by reminding herself she had come to the U.S. for a better life.

"I don't want to live with minimum wage," said Kouyate. "No, that's not my plan."

Like Uwizeye, Kouyate hopes to become a registered nurse. Because she's now a high school graduate, she's been able to find a better-paying job as a community support worker at Howard Center. She plans to attend CCV for a year before transferring to either Vermont Technical College or the University of Vermont.

After his graduation ceremony, Abdulkhaleq received text messages from his friends who had dropped out of high school. "They said, 'We were wrong. We wish we [had] kept going, stayed in school with you,'" he recalled.

His response: "It's never too late. You can go back."

The original print version of this article was headlined "Academic Pursuits"