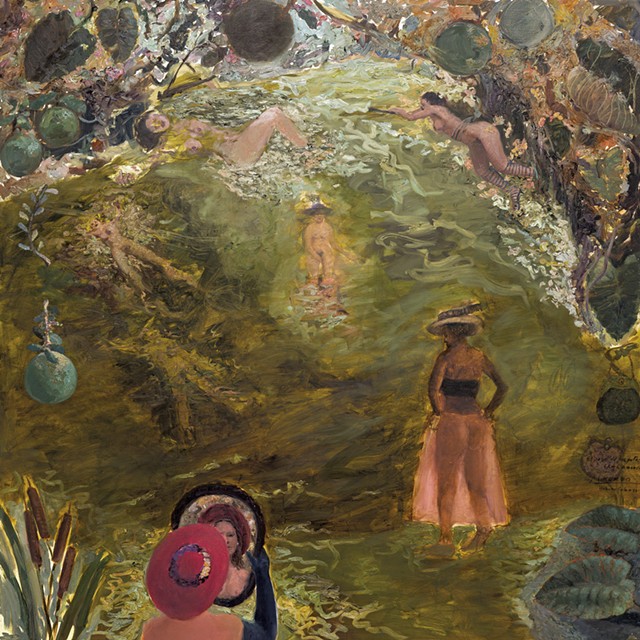 Burlington's Soapbox Arts, in the Soda Plant on Pine Street, has become a destination for viewing the work of emerging artists since it opened in 2019. The current exhibition, "Born by the River," a solo show by Orlando Almanza, has been in the works for nearly as long: Gallery owner and director Patricia Trafton began planning it in the fall of 2020.

That's when Mary Lacy, one of the artists Trafton represents, connected her with Almanza, a 32-year-old artist from Cuba. Lacy has been friends with Almanza's American wife, Kalea Wiseman, since the two women studied abroad together in Cuba during college, in 2011. Almanza and Wiseman married in 2017. In April, Almanza finally received his green card, which allowed him to spend a few weeks in Burlington, give a talk and attend the opening; this is the first of his exhibitions outside Cuba that he has been able to attend.

The show is like a portal to another world. Sixteen of Almanza's paintings, most depicting lush river or wilderness scenes, fill the walls, while a soundtrack of Cuban music chosen by the artist plays over speakers. The artist statement is in both English and Spanish, and descriptions of Cuban myths and legends, grandparents' passed-down stories, and the properties of native plants pepper the labels.

"Born by the River" refers to Almanza's birthplace in the Cuban countryside between the Yáquimo and Sevilla rivers. Almanza left home at age 15 to pursue an arts education in Las Tunas and Havana, and his family later moved, so the place is now a memory for the artist. The title also quotes Sam Cooke's line "I was born by the river," from his song "A Change Is Gonna Come." Aretha Franklin's cover of it, a favorite of Almanza's, opens the soundtrack.

Many of the paintings explore light and shadow in a style of realism blended with symbolism. The first one, "Kalea Resting in the Garden," a 24-inch-square portrait of Wiseman, shows the artist's facility with depicting natural light in the bars of shadow falling across the subject's face. Up close, Almanza's brushwork is surprisingly thick and blunt, its assured daubs easily conjuring a naturalistic pose. 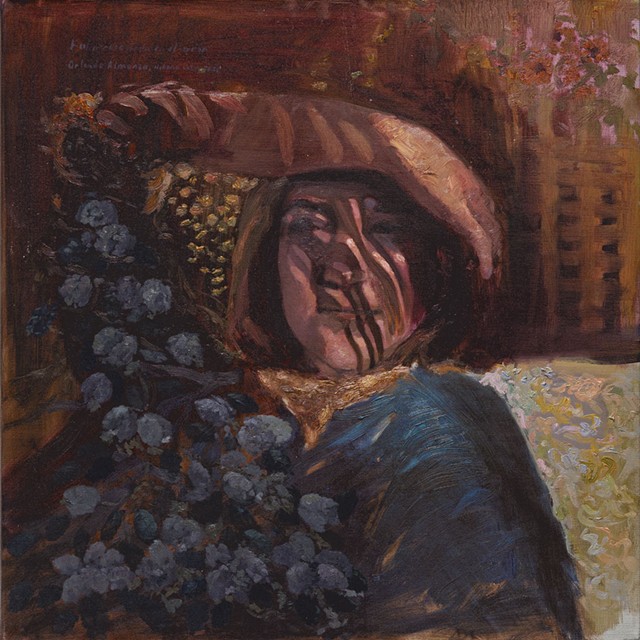 Weightier shadows characterize the larger, 51-inch-square paintings in the show. "The Martyrdom of a Friend" ("una amiga," the term for a female friend, is part of the Spanish title painted on the canvas) is a horrifying double portrait reminiscent of a marriage picture. A grinning man with red eyes, an exposed rib cage and a rotting heart rests his hand on the breast of a woman who seems to fade away into a veil of pale flowers.

The couple poses against a fecund, shadowy background of flowers and plants that reveals more the longer one looks: three small, dark, gargoyle-like faces peering out at the viewer; a mass of crawling worms; scurrying beetles.

In "The Devil and the Güao Plant, a Dispute of Hierarchy in the Mountains," a poisonous native plant faces off against the supreme figure of evil. It's clear who's winning: The plant is encircled by a bright yellow-orange halo, while the devil glances with surprise at his fingers, which have turned to purple-tipped flames.

The painting is split diagonally between a roiling wave of darkness — the devil's domain — and daylight. Encroaching on the latter, the devil's foot turns translucent. Animals observe the standoff from a shadowy border realm, some of whom become apparent only after a moment: a turtle, an owl.

Whether the painting references a political situation in which a native-grown movement prevails against evil is unclear. During a visit with Seven Days at the Old North End house where Almanza and Wiseman were staying, the artist hesitated to address politics, saying only, "The political situation in Cuba is tricky, especially with artists."

He said his primary inspiration is a 19th-century Cuban realist painter, Guillermo Collazo (1850-1896), who spent his later career in Paris.

A green murkiness characterizes the paintings depicting the river of Almanza's memory. "The River of Paradise" shows a handful of isolated nude women enjoying themselves in or beside a greenish pool, the water an energetic profusion of squiggles and thickly layered brushstrokes.

One submerged figure mirrors a woman floating above, while another regards her face in an oval mirror in the foreground. The orbs of fruit that frame the scene belong to the güira (or calabash tree), a source of natural hygiene products that women in Almanza's region use. Memory, in this case, appears to evoke an environment utterly lacking in self-consciousness or fear.

Almanza is relatively new to painting. He trained in sculpture and then printmaking, learning the latter at the Instituto Superior de Arte in Havana. After graduation, he stayed in town to work as a studio assistant to the painter Carlos Quintana from 2015 to 2016; his focus on painting dates from that time.

In a mere seven years, Almanza has managed to sell his paintings to private collectors around the world, including a diplomat in Ghana, an architect in Manhattan and a Cuban restaurant in London. One of his pieces is in the Hood Museum of Art's collection at Dartmouth College in Hanover, N.H. His work has been shown in group exhibitions in Mexico and in Brooklyn, N.Y.; El Paso, Texas; and Santa Fe, N.M. 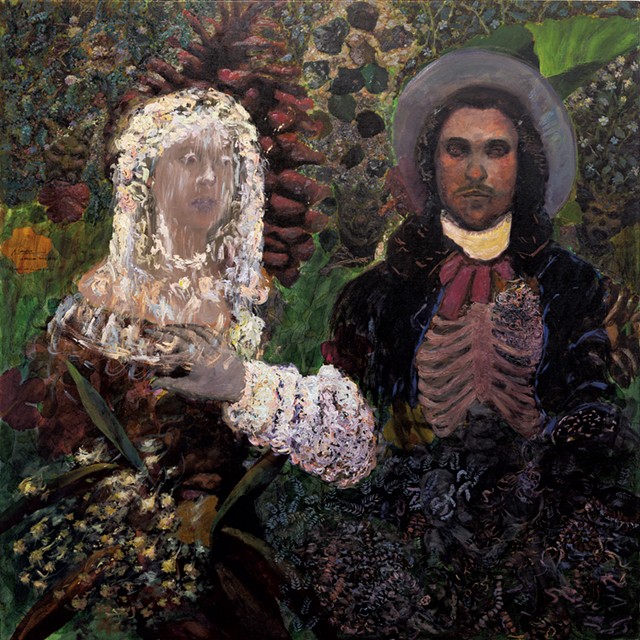 During the visit with Seven Days, the artist credited his wife with spurring him to recall his childhood in the countryside. He began each painting by writing out a memory, sometimes on the wall of their Havana house, and then deciding how to depict it — including, crucially, the time of day. The latter dictates his color choices: blues and grays for evening, ocher for midday, greens and yellows for morning.

The show is "a love letter to my past," Almanza said. "It's a lot of emotions."

Wiseman figures often in the paintings — including in the mirror in "The River of Paradise." She works remotely in the travel industry and serves as Almanza's manager.

"Without Kalea ... I'm here because of her," Almanza declared. Turning to her, he added, "You're 50 percent of this."

Almanza painted the show's six 51-inch-square canvases while still living in Cuba and mailed them in tubes to Trafton, who had them stretched.

During the final phase of his green card process — a four-week stay in Jamaica and Guyana, where Cuba's U.S. Embassy is located — he was only able to sketch. The show's 10 12-inch-square paintings are based on those sketches and date from the past month. Almanza painted them while staying with Wiseman in her hometown of Salem, Ore.

The largest work in "Born by the River," painted on three adjoining square canvases that add up to 59 by 177 inches, predates Almanza's plunge into river-inspired memory. Called "Festivities and Acts of Magic in February," the 2019 painting depicts an imaginative array of dragons endowed with individually menacing expressions and features.

As in Almanza's other paintings, symbolism is at work here: According to the label, the dragons represent the powerful, who hide their wealth behind hibiscus flowers while lengua de vaca (snake plant) leaves try to twist their way in to expose the greed. The work exhibits a lucid brush technique not used in the memory paintings.

In late summer and fall, Almanza will have artist residencies at Sitka Center for Art and Ecology in Oregon and Newport Art Museum in Rhode Island, among other gigs. His work at Soapbox is a must-see before this emerging artist becomes an established one.