The 250 chickens at Berlin's Perfect Circle Farm know when it's chow time. The sound of the bucket loader engine signals that farm co-owner Buzz Ferver is about to dump a heap of compostables into their enclosure. Somehow, none of the birds get buried in the cascade of apple cores, potatoes and deli meats mixed with wood chips and cow manure. Last Thursday the birds pecked over the pile in a feeding frenzy so intense that it was hard to see the ground beneath them.

Multiple mounds of organic matter inside and outside the chicken house suggest Ferver knows how to convert refuse into nutrient-rich dirt. "They're scratching, digging, preparing soil, shitting all over the grass," he explained. "They're creating more fertility in their location." Ferver moves the pooping-poultry operation from field to field, as needed, to make the soil on his land more productive.

A growing number of farms are adopting this practice — in perfect sync with Act 148, Vermont's universal recycling and composting law, which requires that the state stop sending compostable organic materials such as food scraps to landfills by 2022.

"Our collection is up 200 percent just this year, and it was up 200 percent last year," said Lisa Ransom, owner of Grow Compost. The central Vermont company removes up to 80 tons of food scraps a week from restaurants, supermarkets, resorts and other producers of edible waste and drops it off at Perfect Circle, a half dozen other farms and commercial composting operations. "It's exponentially growing," she said.

What's baffling to Ferver, Ransom and others in the state's tight-knit food waste economy is why the Vermont Agency of Agriculture, Food & Markets is making on-farm composting more difficult. Earlier this year, officials decided that importing food scraps from sites off the farm doesn't meet the formal definition of "farming" under the regulations that govern agricultural operations in Vermont.

The state's action, spurred by complaints from neighbors concerned about pests and bad odors, means Ferver will need a solid waste permit in order to keep importing food scraps onto the farm. That permit falls under the purview of the state Agency of Natural Resources and subjects Ferver and other farmers to more rigorous regulations. The rules require them to construct permanent pads where the compost is dumped, for example, and to strictly monitor the temperatures of their compost piles.

"Here we are trying to solve the problem of food scraps in the landfill by having a regenerative process, and they're going to make it hard," Ferver said. "It seems the opposite of what ought to be happening."

Sitting at his kitchen table, Ferver fumed as he flipped through a pile of documents that illustrate what he sees as the illogic of the state's position. He grabbed a printout of the official definition of farming, which includes "raising, feeding, or management of livestock, poultry, fish, or bees."

Bringing food scraps onto the farm to feed chickens would seem to fit, Ferver reasoned. He didn't believe it was a risk when he spent thousands of dollars to set up his feeding and composting system. A November 2007 memo from Cathy Jamieson, chief of ANR's solid waste management division, backed him up. It clearly stated, "ANR does not regulate food waste that is fed to animals."

Agency of Agriculture chief of resource management Cary Giguere acknowledged that the state has allowed farmers to take in food scraps for years. He said many farms manage the organic material responsibly and don't cause problems for neighbors, so the agency essentially looked the other way. 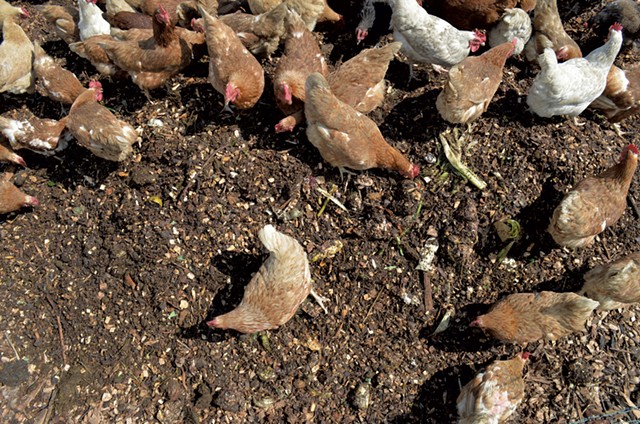 The ANR "has either deferred to us to regulate the farms when they were small enough not to cause an issue — and sort of allowed them to operate without a solid waste permit," Giguere said.

What changed? In recent years, agriculture officials have received "more than a dozen" complaints from neighbors who said the introduction of food scraps brought bad smells, flies, and scavenger birds such as crows and seagulls. There wasn't much the state could do to intervene.

"As the Agency of Ag, we have no mechanism for regulating solid waste. We have no authority over those things that neighbors would call a nuisance," Giguere said. "The folks that are pissing off their neighbors, if you will, we need a mechanism to deal with it, and it's jeopardizing the entire practice."

"Wow, right? Esoteric," Ferver said as he read through the Agency of Agriculture's March 15 memo to ANR. "Man, they thought about this for a long time."

"The whole thing is ridiculous that we have two different agencies that aren't seeing the opportunity here," he said.

Gilbert has been feeding food scraps to chickens for 20 years. Black Dirt Farm takes in 30 tons of food scraps a week, which it shares with one other ag enterprise. Gilbert has plans to grow his current flock of 400 laying hens to 2,000, all eating food that would otherwise go to waste. He views it as a move toward increased sustainability. But according to Gilbert, such innovation doesn't conform to the Agency of Agriculture's rigid focus on legal definitions and old-school farming methods.

"They're having to fabricate a line of reasoning that doesn't actually make any intellectual sense," he said.

Speaking for the ANR, Jamieson said it had no choice: If food scraps aren't considered part of farming, she said, "then it's really discarded waste, and discarded waste is a solid waste and has to be managed."

In an April 11 letter, less than a month after the Agency of Agriculture ruled that importing food scraps isn't considered farming, Jamieson informed Vermont farmers that ANR does regulate food scraps on farms.

"I would not be pleased, either," Giguere said of the farmers' response to the agency's new legal opinion. "We really don't need to be interfering in those successful businesses" that manage food waste responsibly, he said. "We're basically responding to nuisance complaints via the only regulatory mechanism we have for managing solid waste."

Jamieson said her staff is hoping to work with farmers to identify and resolve any compliance issues instead of immediately imposing sanctions on farmers who aren't following the solid waste rules.

"We're willing to give them additional time to come through this process," she said.

The farmers are taking a different approach. They met Tuesday with Agriculture Secretary Anson Tebbetts to ask him to revise the agency's interpretation of "farming" to include the importation of food scraps.