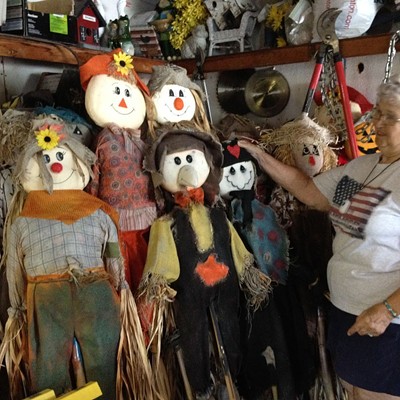 She's particularly pleased by the passersby who stop to admire the display she's set up on her manicured front lawn every fall for the past two decades — dozens of straw men and women, boys and girls, even a baby, a witch and a ghost. The smiling hay-and-burlap scarecrows sport dresses, overalls and duds adorned with hearts and flowers. Some are clustered in groups, holding hands. Others lounge solo on hay bales or linger near the driveway, flower beds and sidewalk.

"It's fun to see people come. Kids stop and shake hands with them. They hug them," she says. "I enjoy it."

Birmingham was born in Jericho and moved to a farmhouse five doors down from her current home when she was 14. She graduated from Shelburne High School in 1947 and married that summer. She and her husband moved to Woodstock for several years, then returned to Shelburne in 1961. Though she never had children of her own, Birmingham was a childcare provider for many years and enjoyed frequent visits from the neighborhood kids.

Her husband, who passed away 10 years ago, worked as a toolmaker for IBM. Though she now lives alone, she has many friends and is close to her nieces and nephews and their children, some of whom live nearby.

The scarecrows typically stay up through October, or until right before the first snowstorm. But Birmingham's yard isn't bare for long. As the winter holidays approach — and before the ground freezes — she puts up jolly snow people made of fabric and wire to spread more seasonal cheer.

How She Does It