Soaking Up the Hygge at WilloBurke Boutique Inn + Nordic Spa 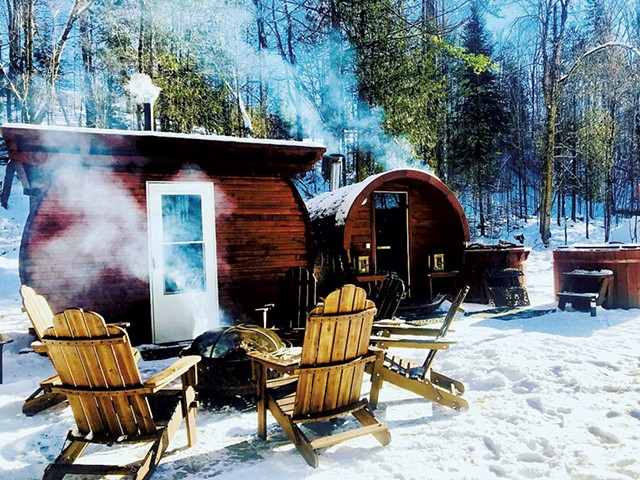 I carry a lot of stress in my shoulders. I probably didn't need a massage therapist to tell me that. But, as he kneaded the knotted muscles of my upper back — which, somewhat disconcertingly, crackled like bubble wrap under his probing fingers — Ron Burke confirmed my all-too-common malady.

"Especially if you work at a computer all day, you should really try to get a massage every month or so," Burke advised, before sending another ripple of crunchy pops through my shoulder blades.

"Mmm hmmpf," I agreed, drifting dreamily in and out of consciousness in the upstairs massage room at the WilloBurke Boutique Inn + Nordic Spa. Getting a monthly massage would far exceed my current pace of one every 40 years — in other words, this was my first. In that moment, though, I probably would have agreed to almost any suggestion from Burke, a hemp farmer and expert masseur with decades of massage experience from coast to coast. I was pretty blissed out by the end of our 60-minute session.

That euphoria was a mere prelude to the main event: WilloBurke's unique, hygge-inducing outdoor Nordic spa. "Hygge," if you haven't heard, is the Danish word for a sense of cozy contentment. Those Scandinavians know how to do wellness-of-being.

"I don't know of anything like it anywhere else in the country," said spa owner Alivia Bertolini in a later phone interview.

Bertolini, 38, opened the eight-suite WilloBurke Boutique Inn in the heart of East Burke Village in 2015. Last September, the Kirby native and former lawyer added to her offerings a Finnish-style Nordic spa, which she believes is the first of its kind in New England and possibly the U.S.

Seven Days couldn't confirm the existence of similar Nordic spas elsewhere in the lower 48. But a relatively close analogue to WilloBurke exists just over the Canadian border: Spa Nordic Station in Magog, Québec. Like its American cousin, Spa Nordic Station is a Scandinavian-style spa focused on hydrotherapy through a series of saunas, cold baths and hot tubs. Both establishments feature rustic architecture and serene riverside settings.

But while the Canadian spa encourages a communal experience in which guests steam, soak and frolic together, WilloBurke offers more secluded environs. Set back in the woods along the Passumpsic River, four clusters of cabanas, cold baths, and wood-fired saunas and hot tubs afford welcome privacy.

"You really feel like you have the whole place to yourself," said Bertolini.

When my girlfriend and I visited WilloBurke in mid-December, we were, in fact, the only guests, as the spa hadn't yet opened for the winter season. To give us the full experience, Bertolini prescribed a specific course of action. Following our late-afternoon massages, we were instructed to fuel up for the spa at the nearby Burke Publick House, a lively bar and restaurant in walking distance of the inn.

"The spa is meant to be an evening activity," Bertolini advised. "And you should eat first, because afterwards you won't want to do anything but go to bed."

She proved correct on all counts. In the afterglow of our massages, dinner at Burke Publick House was delightfully relaxed. We took our time sipping a pair of creative and well-crafted cocktails, and we leisurely noshed on the gastropub's upscale bar fare. (Pro tip: Try the Romeo wings, slathered in a lip-smacking, nostril-stinging hybrid of mustard and Buffalo sauce.)

Sated and warmed by good food and drink, we made our way back to the inn, where employee Heidi Johannen led us to our cabana. As we crossed a footbridge spanning the river, we caught a whiff of woodsmoke on the air. The alluring scent became stronger as we followed a lit path through the snow and into the woods, past the frame of the Valhalla Nordic Pub, an outdoor bar slated to open this spring. (In the meantime, guests are encouraged to bring their own beverages, which we did — a bottle of Prosecco that we conveniently chilled in a snowbank.)

We changed into swimsuits in our cabana as Johannen stoked the flames in a fire bowl outside. Next, she led us to the cylindrical, cedar-lined sauna, imported from Europe and heated by wood to a toasty 150 to 160 degrees. Just to the right of the sauna sat the wood-fired, barrel-style hot tub — heated to a more relaxed 100, according to Johannen. Beside that was the cold bath. It was all impossibly cozy, inviting and, well, hygge AF.

Typically, Bertolini recommends a traditional circuit: work up a sweat in the sauna, cool off in the cold bath, then relax in the hot tub. She suggests that guests try to complete the triad three times in a two-hour session, by which point, she said, they'll experience a euphoria akin to a runner's high.

Our visit departed from the norm in that we weren't held to a time limit, since we had the place to ourselves. Also, the cold baths had been drained to prevent freezing, leaving us two options for the chilly middle segment: Take a dip in the icy brook or roll around in the snow.

On our multiple circuits over a drizzly three-plus hours, we opted for the latter. Recent rains had swollen the river to perhaps-unsafe levels, and drowning seemed like it might harsh our considerable mellow. Fortunately, even though it was crusty, the snow was adequate to cool our steaming bodies, post-sauna and pre-hot tub. Before long, we felt awfully damned good.

Between the massage and the spa — and perhaps the cocktails and Prosecco — all that stress in my shoulders, and elsewhere, evaporated into the brisk night air, just as Bertolini had predicted.

Like steam rising from a hot tub on a frigid night in the Northeast Kingdom, the science of hydrotherapy is hazy. For every study that verifies an alleged benefit, there's another that contradicts it.

Bertolini first experienced Nordic spas while visiting friends in Finland and devised her own spa over drinks in a sauna there. She believes in many of the most commonly cited advantageous effects, such as stimulation of the circulatory system, relaxation of fatigued muscles and cleansing of the body's toxins.

"It's the use of water to make you feel good," she said, describing the theory behind hydrotherapy. "It's the heat from the sauna that releases toxins; it's the water from the hot tub that relaxes your muscles. And it all just gives you that euphoric feeling."

Whether the health benefits are scientifically valid or not, the euphoria is real. And you probably don't want to argue with Vikings, who have employed hydrotherapy for centuries, as have other cultures around the world. They might tell you that lounging in a wood-fired hot tub on a winter's night, with a glass of wine in hand and a loved one beside you, is about as well as being gets.

The original print version of this article was headlined "Gaining Steam"