So You Want to Start a Nonprofit? Here's What It Takes | Economy | Seven Days | Vermont's Independent Voice

So You Want to Start a Nonprofit? Here's What It Takes

When someone asks certified public accountant Wallace Tapia how to properly set up a nonprofit organization, he always recommends hiring an attorney to stay on the right side of the Internal Revenue Service.

For three summers, I had been running a leadership and mentoring program for middle school girls in Randolph, my hometown. We called ourselves GEMS: Girls Empowered, Motivated, Strengthened. We had our agenda nailed: guest speakers, treks downtown for community service, group discussions, games of capture the flag and crafts such as tie-dyeing.

What had started as a pet project during college vacations had grown. People began to offer donations; parents interested in signing up their daughters wanted some assurance that we were legal. I started to feel a twinge of unease that my financial documentation was limited to an Excel spreadsheet on my laptop and copies of grant letters from funders.

Official nonprofit status would provide what we lacked: a formal structure to seek donations and grant money; a way to legally pay my coleader; and, of course, legitimacy.

I was 22 years old; what I didn't know, I figured I could google.

It was my first foray into the nonprofit sector — a world with its own rules for taxation, fundraising and oversight. GEMS would be joining the more than 6,000 nonprofits across Vermont, from big organizations like hospitals and churches to tiny local causes like mine.

Though different in many ways, we all shared one quality: For-profit corporations aim to generate profit, but nonprofits must make their central mission one of public good. In exchange, the U.S. government exempts 501cs, as they're called, from paying federal income taxes.

In my do-it-yourself case — no lawyer involved — it took four months, two dozen forms, a handful of phone calls to accountants and nonprofit directors, and $400 in filing fees to become a 501c3.

Most nonprofits fall into this category of groups established "for purposes that are religious, educational, charitable, scientific, literary, testing for public safety, fostering of national or international amateur sports, or prevention of cruelty to animals and children," according to the IRS.

The federal tax agency also designates 501c1s and 501c2s, all the way up to 501c29s, depending on the purpose of the organization. For instance, 501c4s can do political lobbying. Others are more obscure. A 501c21 is a black-lung benefit trust. Cemetery companies fall under 501c13.

I called GEMS "educational" — close enough for government work, I figured. I wrote a mission statement in which I promised to "build confidence, promote and develop leadership skills, and empower young women to become active contributing members and change-makers within their communities." 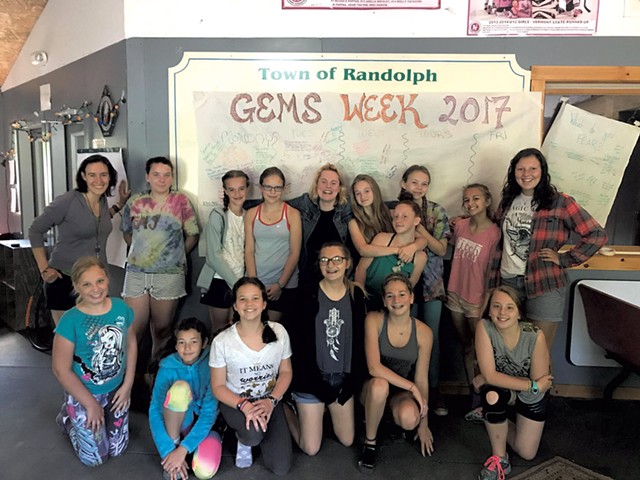 To qualify as a nonprofit, GEMS also needed a board of directors. I convinced three women much older than I — a marathon-running emergency room nurse, a guidance counselor and a police-officer-turned-prosecutor — to serve.

They helped me wade through the rules and regs: In Vermont, 501c3s are exempt from paying state income tax, sales tax and property tax, as long as the property is used by and benefits the public.

"The quid pro quo is [that nonprofits] need to serve the public at large," explained Burlington-based Tapia, who specializes in nonprofit accounting.

It costs $125 to become incorporated as a Vermont nonprofit. Registrants pick a name for their organization and file as a trust, an unincorporated association or, in the vast majority of cases, as a nonprofit corporation — a designation that protects board members from financial liability, Tapia said.

State incorporation allows entities to set up a bank account and allows potential donors to investigate to "see if it's legit," said Ashley Sherman, who works in the corporations division of the Vermont Secretary of State's Office.

A federal filing is required to get the most important benefit: the right to solicit tax-deductible donations. For some nonprofits, that means filling out an IRS form called the 1023. It features 28 pages of check boxes and bureaucratic jargon, plus a host of additional forms: articles of organization, bylaws, financial documents, a statement of where the assets will go if the entity is dissolved and a description of its purposes "in specific, easily understood terms."

Fortunately, GEMS didn't have to go through all that. Since our organization had less than $250,000 in assets and anticipated an annual income of less than $50,000 in each of the following three years, we qualified to file a 1023-EZ. That simpler, streamlined 2.5-page form was introduced in 2014 to reduce the IRS backlog of 501c3 applications, according to Tapia.

The form asked me for a list of board members and an employer identification number — which required a separate application to the IRS. The 1023-EZ doesn't ask for bylaws or other documents, but I had to promise, under penalty of perjury, that I had all of those things.

A web search turned up a bylaws template I could use. The board members and I met in a public library to do some soul-searching about the nonprofit's rules of the road. Should board members have to donate? Would the board follow Robert's Rules of Order? Would there be term limits? We hashed out the tenure and duties of board members, the board election process, and our decision-making protocols. We wound up with a three-page document.

In the end, the figure-it-out-as-you-go approach served us well. It usually takes four to six weeks for the IRS to acknowledge the 1023-EZ, as opposed to four to six months for the full form, according to Tapia. On September 9, 2016, an email arrived from the IRS with good news for GEMS.

"We're pleased to tell you we determined you're exempt from federal income tax under Internal Revenue Code (IRC) Section 501c3," it read. The process had taken less than two weeks.

But even if GEMS had filed flawed applications, neither the feds nor the state would likely have noticed, said Tapia.

Vermont merely requires a biennial report updating board members and officers. The Secretary of State's Office investigates — and could eventually revoke the state recognition — only if a nonprofit fails to send its paperwork and the required $20 fee, according to Sherman. An additional registration is required if the organization plans to pay a nonemployee or an outside agency to fundraise.

As for the feds, Tapia said he's only seen the IRS audit organizations half a dozen times in the last 25 years.

Lauren-Glenn Davitian is the founder of Common Good Vermont, an organization that advocates and provides resources for nonprofits across the state. She said starting a nonprofit is not always advisable.

"You have to have made sure it's absolutely necessary," said Davitian, noting that teaming up with an umbrella or partnership organization can be a better way to "get the work done."

The bureaucracy of operating an organization is "not about doing the thing you're in love with; it's about running a business," she said.

Davitian has a point; grant writing and tax forms aren't as exciting as leading discussions about class and race with 12-year-olds, our knees dirt-stained from hide-and-seek tag.

But in the case of GEMS, the bureaucracy paid off. We opened a bank account and, in late 2016, had something to put in it: a $20,000 grant from the Jack and Dorothy Byrne Foundation. Last year, when my day job got too demanding, the board hired a part-time executive director to replace me.

I still work the summer session, my coworkers and I now actually get paid, and GEMS is going — and growing — strong.