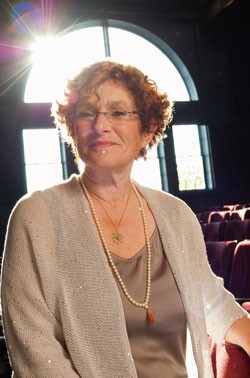 It was clear from the first Jupiter reference that the Sultana Creative Spirit Awards would be a thoroughly Hinda Miller affair: part politics, part business and totally bizarre.

“Everything happens for a reason,” Miller informed her audience last Thursday at Burlington’s Main Street Landing Film House. “So it’s not by accident that you find yourself here. Why? We don’t know, but it will be revealed.”

After 10 years representing Chittenden County in the Vermont State Senate, the Burlington Democrat was celebrating her retirement from politics, which she dubbed her “retryment,” and the start of her “cycle of Sultana.” To mark the occasion, which doubled as a Senate Democratic fundraiser, she had invited a few of her closest friends — an assortment of Montpelier muckety-mucks and Burlington business leaders — to toast her fellow “Sultanas” and, of course, herself.

In the audience were enough senators to overturn a veto, enough statewide officeholders to fill a ballot and enough lobbyists to defend a utility merger. But Miller made clear from the start that, on this night, she was in charge.

For the next 45 minutes, Miller flitted about the stage, arms flailing, as she doled out strings of pearls in deerskin pouches to some 30 “Sultana” awardees: her yoga instructors, fellow female senators, her grown son’s former martial arts teacher, and others she said made up “the local, creative, sustainable economy.” She called recipients up to the stage in groups, showered them with hugs and meandering anecdotes, and then shouted, “Out!” when she was done with them.

It was a fitting valedictory for a senator known more for the Statehouse yoga sessions she led than for the legislation she sponsored. Her retirement party coincided with the release of a new self-published memoir, Pearls of a Sultana: What I’ve Learned About Business, Politics, and the Human Spirit, which traces Miller’s quixotic journey from her native Montréal to the height of the women’s sports-apparel business and beyond. Filled with numerology and Eastern mysticism, the tome alternates between autobiography of a free spirit and manifesto of an aspiring Sultana.

What is a Sultana?

“The concept of Sultana is very much a work in progress,” Miller writes. “I’m not looking to define it or invent it personally. It needs to be created through a process shared with many other people.”

The term came to Miller as she traveled through Turkey last summer with her husband, Joel, and their two children. A tour guide jokingly referred to Miller as Sultana, alluding to the Ottoman queen mother of Suleiman the Magnificent. The nickname stuck, and an obsession was born.

Miller devotes plenty of ink in her book to describing the nebulous notion, but it’s never quite clear what she’s talking about. Nor is it clear whether she herself knows.

“Sultanas integrate their experiences with the power of love,” she writes. “They are luminous. Mosaics. Tapestries. Is it a club? A movement? A product line? Time will tell. And I, for one, look forward to finding out. Evasive? Not intentionally. We are at a moment of evolution, but no one knows exactly where we are beginning that process.”

Miller is not one for straightforward answers. The day before her retirement party, she parried questions in an interview at her spacious DeForest Heights home with vague references to numbers and planets. Wearing a leopard-print suit with yellow Crocs, pearls and a gray Champlain College sweatshirt, Miller explained why she is stepping down from the Senate: “Because 10 is a magic number, and I’m a woman with cycles of development and I’ve been able to know the beginning and the end.”

So the number 10 guided her decision?

“I’m a student of the mysteries of Kabbalah,” she responded. “And I’ve been studying with my teacher and my yogi friends Kabbalah and numbers and symbols and days and planets. Planets, mostly. So five has a meaning. Five’s really good for communication. It’s ruled by Mercury. I called to ask that my interview be on Wednesday because Mercury — five is the best day for that. And Thursday is a beautiful day. It’s ruled by Jupiter. It’s lord of the planets. It’s wealth, health, and that’s when our Sultana awards are. And it’s a waxing moon, so we’re starting with new things.”

Beyond her fixation with numbers and planets, Miller’s memoir tells the fascinating — if strange and self-indulgent — story of a woman who has found success after success in the worlds of business and politics.

While working a summer job as a costume designer at the Lake Champlain Shakespeare Company in 1977, Miller and two friends set about solving a problem they encountered whenever they went jogging: “the discomfort and embarrassment of bouncing breasts.” Their elegant solution was the Jogbra, two sewn-together jock straps that became the template for the modern sports bra. By the time Miller and partner Lisa Lindahl sold Jogbra to Playtex Apparel in 1990, the company employed more than 175 people and was racking up more than $75 million in annual sales.

But that wasn’t the end of the line for Miller, who at the age of 40 was already a millionaire. After a stint running the Jogbra brand at the Sara Lee Corporation, which had acquired Playtex in 1991, Miller left the company in 1997. Two years later, she introduced herself to the founder of another prominent Vermont company — Green Mountain Coffee Roasters’ Bob Stiller — and secured a place on its board.

Her association with the Waterbury coffee company proved highly lucrative. In the past year alone, according to company records, Miller has sold more than 120,000 GMCR shares she received as stock options, earning nearly $11 million.

Following her business success, Miller’s focus shifted to politics — though her explanation of what led her to run for the Senate is maddeningly brief: After becoming a U.S. citizen following the 2000 election, the ex-Canadian writes, “A lawyer friend of mine saw me at the polls and asked if I wanted to run for Senate. It was that simple. He said he would help me find someone to run my campaign and raise the money.”

Initially, she planned to run as a Republican, but after a slew of Democratic politicians asked her to reconsider, she changed her mind and switched parties. “Other senators have a political ‘philosophy,’” she explains. “Not me. What I have is a sense of the whole.”

Miller’s explanation of what drove her to run for mayor of Burlington in 2006 is no more complicated: “I thought I could do some work closer to home and someone asked me and I was too stupid to know that everybody gets asked, but in the end you’re left holding the ball,” she said.

After spending a record $60,000, Miller came up short — losing in instant-runoff voting to a little-known Progressive state representative named Bob Kiss. Miller’s chances were badly damaged in the closing days of the race, when Lindahl and another former Jogbra employee went public with criticism of her management style and accused her of inflating her role in the Jogbra’s creation. Miller says now that she erred in declining to refute the allegations.

“I decided I would take the spiritual path and I would go for right action and right speech and I would not speak up for myself,” she said. “Looking back with the skills I have now, I would speak up. I just didn’t have it in me.”

Miller still doesn’t take kindly to questions about her business record. Though she says her central focus in the legislature has been to support “the local, creative, sustainable economy,” she writes at length about outsourcing Jogbra’s manufacturing to Puerto Rico and then China — disclosing that one Caribbean factory she settled on “was hot and stuffy and the bathrooms never worked.” The situation improved, she writes, after Jogbra provided the factory with business.

Asked if there was a disconnect between her philosophy and her business decisions, Miller stood up and paced the room, saying, “The job was to get the job done.

Miller has a reputation in the Statehouse as a staunch supporter of business interests, though perhaps not always an effective one. In interviews, several colleagues offered on-the-record praise for her eclectic blend of mysticism and politics. Off the record, they said she was largely irrelevant.

In her memoir, Miller gives her own legislative history short shrift — though she highlights her support of state recognition for the Abenaki and naturopathic parity in health insurance. She seems more interested in spiritual anecdotes, such as an internal debate about whether to switch from Senate seat number nine to seat number 10 — noting a difference in energy and planetary alignment.

The one legislative battle she describes at length: her failed attempt in April to resurrect physician-assisted-suicide legislation by attaching it in committee to a bill banning the use of tanning beds by minors. At the time, she was putting the finishing touches on her memoir and decided the episode would fit neatly in her book.

“I had a hole in Chapter 7 and somehow ‘Death With Dignity’ found me, and all of a sudden I was standing up there. Someone called me and said, ‘Will you attach this to the tanning bill?’ and I said, ‘Yes,’” she recalled.

Miller tells the story in the present tense, quoting liberally from press accounts and an op-ed she wrote in the Burlington Free Press, in which she accuses Sen. Dick Sears (D-Bennington) of bullying her on the Senate floor when he questioned her about the legislation.

Later in her memoir Miller writes that she is “grateful” to Sears for “teaching” her about bullying.

“I had never known what it felt like to be bullied in my whole life until I experienced his bullying behavior,” she writes. “It did not feel good at all. So now I know how to speak about it and how to stand up consciously, with a proud, strong heart, rooted in my core belief.”

Sears contests her interpretation of the incident.

“I certainly did not bully her,” he says. “I was trying to make the point that when you take a bill out of committee and you don’t have testimony on that bill, there are certain things you should be aware of that you aren’t. I don’t think she did her homework.”

Miller said she’s looking forward to leaving the Senate behind her, saying that it stifled her “creative spirit.” She declined to predict what she’ll do next, but she indicated that Sultana could yet become a sort of consulting firm, making use of the skills of her fellow Sultanas.

“This summer I’m really going to find out what is Sultana,” Miller said. “I can begin to answer more, ‘What are you going to do? What are you going to sell?’ It will all evolve, because there’s a heart to this Sultana that a lot of women will relate to. It’s not really about me. I’m just one Sultana.”

Miller will discuss her new book, "Pearls of a Sultana," at Burlington’s Phoenix Books on Saturday, June 9, at 2 p.m. phoenixbooks.biz.