Vermont's ski museum adds snowboarding to its name, and its collections 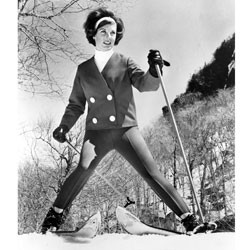 Every year, skiers and snowboarders from around the world congregate in Vermont to enjoy the state’s pristine mountain slopes. Many of them are drawn to Stowe — the “ski capital of the East” and home to Mt. Mansfield and the Stowe Mountain Resort. Perhaps no other town in the country is more steeped in winter-sports history. But, if not for the Vermont Ski and Snowboard Museum, much of that history might have stayed buried.

The museum — formerly called just the Vermont Ski Museum — celebrates its 10th anniversary in Stowe this year and adds snowboarding to its name and collections. To kick off this new addition, the VTSSM is displaying a number of items from the Burton archives, on loan from company founders Jake and Donna Carpenter. The couple will be the first snowboarders inducted into the museum’s Hall of Fame later this month.

Though new to the public face of the VTSSM, snowboarding is not presented as just a tag-along, second-class sport. The addition has been a long time in the making, according to director-curator Meredith Scott, and the 10th anniversary celebrations provided the perfect occasion to formally acknowledge snowboarding’s huge impact on Vermont’s winter landscape.

Snowboarders now account for some 30 percent of visitors to resorts, more than making up for a steep decline in skiers over the past two decades. “We didn’t want to be excluding a large segment of people that were coming to visit here,” Scott says.

Besides, snowboarding is one of the coolest, raddest, most dangerously sexy things on the planet, right? As such, the sport adds a hip dimension to the museum’s already impressive collection.

Nestled near the foot of a mountain with the rest of downtown Stowe, the VTSSM looks sedate enough from the outside. On entering the main exhibition hall, though, you get the distinct feeling that something is rumbling beneath the stillness. Perhaps it’s the history of the sporting gear itself, still emitting energy from its heyday. Take, for instance, the 72-year-old Peruvian J-bar ski lift hanging above your head as you stroll through the cozy, Federal-style building.

Or maybe it’s the stories on the wall, the words and images of ski and snowboard gods resonating through the room, that generate those vibrations.

Then again, it could be the dragon.

Well, OK, not an actual dragon — it’s a pipe dragon, displayed prominently on the first floor, towering over passersby with its rusty, jagged teeth. It’s imposing — and, frankly, a bit frightening — like a metallic mandible left agape in predatory anticipation.

But there’s nothing to fear: A pipe dragon is a grooming machine, used to carve boardable topography from otherwise boring terrain, be it a half-pipe, quarter-pipe or super-pipe. This beast makes possible the aerial antics of those daredevils on snow. And this particular one is a true Vermonter, having served Jay Peak for years before coming to rest at the VTSSM. Besides contributing its grandeur, the pipe dragon serves as a nice contrast to the early ski lifts in the museum, with its complex set of chains and gears and its inhospitable bearing.

The dragon guards the Burton exhibit, called “One Track Mind.” This is composed entirely of pieces from Burton’s private collection, and it’s the first time they’ve been on public display. “It’s sort of a once-in-a-lifetime opportunity to see that stuff,” Scott says. “One Track Mind,” the first of the museum’s rotating exhibits, will be on display for one year. For anyone even slightly interested in the history of snowboarding, it’s a must-see.

As most Vermonters — and snowboarders everywhere — know, Jake Burton Carpenter is widely credited with inventing the sport as we know it. In the 1970s, Carpenter worked in a barn in Londonderry, Vt., seeking to improve on the “snurfer,” which, unlike the modern snowboard, offered only basic maneuvering control through the use of a rope tied to its nose.

Carpenter created a slightly concave board, which allowed the rider to turn by leaning, and added water-ski-style foot traps to the deck, as well as polyurethane to the bottom for speed and agility. (Legend has it that, back then, Carpenter was unable to afford the proper equipment, so he wore a ski mask while applying the poly to protect against the fumes.)

Sixteen snowboard prototypes from that time are currently on display at the museum, along the walls behind the pipe dragon. Back in 2002, Carpenter assembled a similar snowboarding exhibit, “How Vermont Shaped Snowboarding,” for the museum’s grand opening. The display hadn’t really evolved since then, though, and the museum’s board of directors decided it was time for a change.

“When we started to have snowboarders on the [museum’s] board … we knew that the first thing we had to do was be able to have an exhibit that lived up to the name,” Scott says.

Though the Burton exhibit dominates the museum right now, it by no means overshadows the quality or historical value of the ski-related artifacts at the VTSSM. The museum’s roots run deep in Vermont ski culture.

Roy Newton of Brandon, Vt., founded the first incarnation of the museum in 1988. An avid skier himself — and then-editor of Vermont Ski News (now Vermont Ski & Ride) — Newton accumulated more than 4000 artifacts related to the state’s skiing history. Impressive though the collection was, too few people made their way to Brandon to see it. Realizing that his efforts were going to waste, Newton decided to change location.

The museum initially moved to Killington, but Newton struggled to find an ideal locale until 2000, when a group of Stowe businessmen resolved to bring the collection to their town. Among them were John Springer-Miller, CEO of PAR Springer-Miller Systems; Chris Francis, owner of Ye Olde England Inne; Scott Noble, director of the first volunteer capital campaign for the museum; and Ken Biedermann, who is now general manager of the Green Mountain Inn.

With a generous donation from local businessman Chuck Perkins and his wife, board member Jann Perkins, the group arranged a lease for the former town hall right on Main Street. And, with $1.2 million in additional pledges, they were able fully to renovate its interior.

Built in 1818, the building had served the community well in various functions — not only as a town hall but also as a nondenominational church and a fire station. In the 1860s, a team of oxen pulled the structure — on rollers — down Main Street to its current site at the south end of the village.

Indeed, what other town in Vermont more fully embodies the spirit of winter sports? But, while most visitors flock to Stowe for leisure, the museum’s collection isn’t all about fun and games. One of its most celebrated permanent exhibits elaborates the impact that Stowe skiing has had on American military history through the National Ski Patrol — which celebrates its 75th anniversary this year. The exhibit tells the story of how the NSP, led by Charles Minot “Minnie” Dole, spearheaded efforts to convince the War Department to form the 10th Mountain Division during World War II. The NSP prepared soldiers to fight effectively in winter combat conditions. The division went on to fight in northern Italy from December 1944 until the German surrender in May 1945.

It’s a remarkable story, and one that has served as a cornerstone exhibit at VTSSM since its opening — with the division’s uniforms, tents, rucksacks, maps, badges, bullets, field manuals and more displayed prominently upstairs.

Currently, the VTSSM has more than 7750 items cataloged, and that figure doesn’t even take into account that most ski equipment comes in pairs. In addition to the rotating exhibits, the VTSSM is bursting at the seams with historical memorabilia. Ten years have passed since the museum’s founding in Stowe, and history keeps on happening, guaranteeing that there will be plenty more to see at the VTSSM for years to come.

Especially with the addition of snowboarding, Scott believes the museum is on track to make its next decade as successful as the first. “I think it will be fun. If you start to think about four or five of these yearlong exhibits,” she says, “my goodness, we’re halfway to 10 years!”

The Vermont Ski and Snowboard Museum in Stowe is open every day except Tuesday, from noon to 5 p.m. Info, 253-9911. vtssm.com

The exhibit “One Track Mind” will be on view until September 27, 2013. “Nordic Ski Evolution/Revolution” opens on Sunday, October 14, with an event called “Salute the New Cool of Nordic Skiing: Rally With Today’s Superstars and Past Heroes,” including afternoon panel discussions highlighting the past, present and future of cross-country ski areas, technology, coaching and youth development, 1-5 p.m.; followed by a buffet dinner. VTSSM Nordic Hall of Fame inductees will hold a Q&A at 7:30 p.m. $5 for any panel discussion, $15 for dinner.

The National Ski Patrol celebrates its 75th anniversary on Saturday, October 20, with daylong events beginning at 11 a.m., concluding with a celebration dinner at the Rusty Nail Bar & Grille in Stowe.

On Sunday, October 21, the VTSSM will formally induct Jake and Donna Carpenter, as well as Charles Minot Dole, D. Trowbridge Elliman, Leslie Thompson Hall and Tiger Shaw, into its Hall of Fame. The induction event begins at 4:30 p.m., followed by dinner at the Trapp Family Lodge Event Tent. $60 for museum members; $85 for nonmembers.