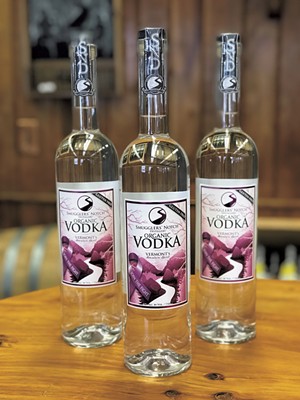 Smugglers' Notch Distillery is launching a new product: Gluten Free Organic Vodka made from organic corn. The vodka should be in Vermont state liquor stores by next week, according to Ron and Jeremy Elliott, the father-son team who own the Jeffersonville company.

The Elliotts said the idea of making organic, gluten-free vodka came to them about three years ago, but it took time to meet the required state and federal regulations. The certification involved acquiring a new set of equipment dedicated to the product to prevent cross-contamination, they said.

For the Elliotts, the new vodka is a way to contribute to the community. "We've had many of our family and friends fall victim to a form of cancer that has taken their lives," Jeremy said. "And we wanted a way to give back." The distillery will donate $1 from the sale of each bottle to a cancer research organization, starting with the University of Vermont Cancer Center.

The new vodka is the eighth product made by Smugglers' Notch Distillery, which was incorporated in 2007 and sold its first bottle of liquor in 2010. The business is a retirement project for Ron, who had a career in business management in Connecticut before he moved to Vermont to start the company with his son.

Jeremy, a graduate of UVM, worked as a chemist for pharmaceutical companies for many years. He gave up that job last year to focus full time on the distillery.

"We thought our skill sets fit [together] very nicely," said Jeremy, who noted that his experience in chemistry was good preparation for the business. In distilling, as in pharmaceuticals, "It's a perfect relationship through process control and quality control," he said. "How you make a product from start to finish."

The original print version of this article was headlined "Organic Spirit"