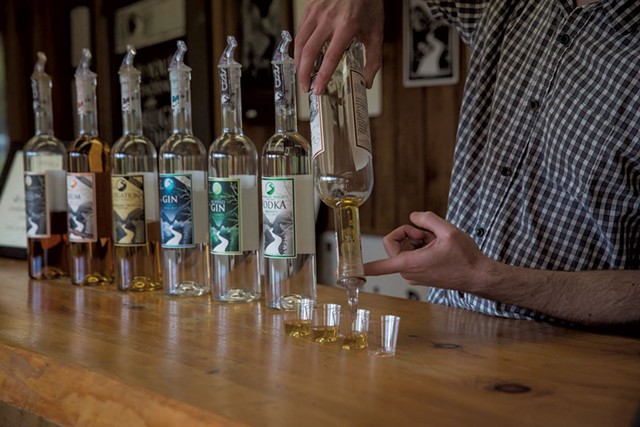 On Thursday, October 4, Smugglers' Notch Distillery will host a cocktail party and ribbon cutting to celebrate its new distillery and tasting room at the former North Woods Joinery building at 5087 Route 15 in Jeffersonville.

The company will increase its capacity sevenfold in the 14,000-square-foot facility, just down the street from its current location in the Bell-Gates Lumber building, where it will produce its full line of vodkas, gins, rums and whiskeys. While Smugglers' Notch Distillery will continue to operate tasting rooms in Waterbury and Burlington, the new location will double as a visitor center and event space, said Jeremy Elliott, who founded the company with his father, Ron Elliott, in 2009.

The Lamoille Valley Rail Trail passes through the new site's 10-acre campus, which also includes ample Lamoille River frontage. As an avid outdoorsman, the younger Elliott said he's excited to host fresh-air events on-site. "We have direct access to the bike path, and the river's right there for fly fishing," Elliott said. "We're going to keep our access open and encourage people to recreate in Jeffersonville."

The company will shift operations to the new space once it secures final permitting from the federal Alcohol and Tobacco Tax and Trade Bureau, Elliott added. The changeover will require a pause in distilling while equipment moves from one location to the other.

The distiller says the tasting room will open at the "beginning of the year."