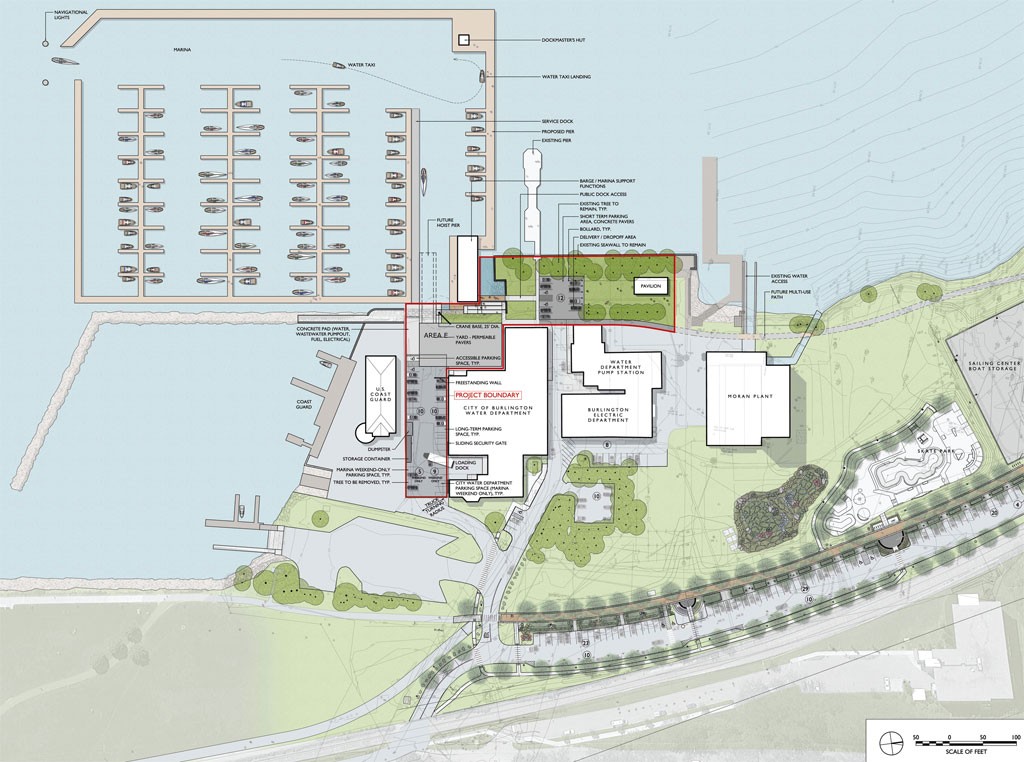 Tom De Moya navigated his 24-foot Yamaha motorboat out of the crowded slips at the Burlington waterfront and pointed it toward the broad, blue expanse of Lake Champlain. It was a glorious sunny day, and he was headed out for a short midday ride with a friend.

The web analyst at Dealer.com goes out on the lake at least three times a week in the summer. "Absolutely stunning" is how he recalls the impression it made on him when he moved to Vermont in 2009. "I'm from Florida, and we don't have beautiful lakes with mountains on the other side," he said — and here "crocodiles aren't trying to eat you." 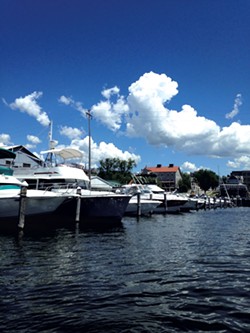 De Moya co-owns the boat with a friend, who already had a slip at the Lake Champlain Ferries dock near Perkins Pier. Otherwise, he might have waited years to get a public or private dockage anywhere in Burlington harbor, where demand dramatically exceeds supply.

That could change. A proposal for a new private marina with up to 160 slips at the northern end of the waterfront is moving forward through the public approval process. If the plan sails through, construction could begin next year, with the marina opening in the summer of 2016 or 2017.

The city is also investigating a public project near Perkins Pier that would add slips and moorings, but an expanded municipal marina is likely further off.

Many boaters have one response to the proposals: Hurry up, because Burlington is missing out economically. Not only is the city turning away Vermonters looking to park their boats for the season; it has erected a "no vacancy" sign for floating travelers who would like to shop and eat downtown, but can't find anywhere to park their watercraft.

"There are a lot of people coming in — vacationers from the north, the south — and there are just no slips here," said De Moya. "I think the city's losing a massive amount of money."

And while locals might be able to find slips in neighboring towns, Burlington's the place to be, he said: "This is where everything's happening — downtown."

Lucy and Alan Abair of Burlington agree. "We need more slips, and we need a nice place for people to come in, take a shower," said Lucy, as the couple prepared to take their motorboat out from Perkins Pier.

The private marina project would be built and operated by local developers Charles DesLauriers and Jack Wallace, whose recent projects include Hotel Vermont and Burlington's Hen of the Wood restaurant. Their $5 million proposal, called the Burlington Harbor Marina, would be built between the U.S. Coast Guard Station and the Burlington fishing pier, on public lake frontage where a small pavilion and picnic area are located now. The Community Sailing Center and Moran Plant are just north of it.

The project would include a perimeter dock, interior docking and up to 160 boat slips, 40 percent of which would be reserved for "transient" boaters; the rest would be rented under long-term agreements. A floating marina building would contain restrooms, guest bathing and laundry facilities, offices, a store, and some sort of food and beverage service. There would be pump-out facilities for boats and a stand for a water taxi to shuttle people around the harbor.

The marina would have at least 25 parking spaces, as well as a temporary drop-off parking area. Wallace said the developers hope the marina will be open for part of next season, and a full season the year after that. If the city can help the marina find more space as the northern waterfront redevelops, it would gradually add services on land such as boat storage, he added, becoming a full-service operation with year-round employees.

Nate Wildfire, assistant director for economic development at Burlington's Community & Economic Development Office, said the project addresses a well-known problem: "We're the largest population center by far on Lake Champlain, and we have the seventh largest marina. We are underserved.''

There's money in it, too. Gross revenue from the city's marina operations totaled $1.1 million in 2013, with net profits of $450,000. At that time, 975 boats were on the waiting list for a slip at the city marina, which currently accommodates watercraft at 189 slips and 76 moorings.

Out-of-town boaters come into the city to shop at stores, eat at restaurants and stay at hotels, all of which pay taxes. Increasing the number of slips — either at public or private facilities — would increase overall revenues in a profitable trickle-down effect.

All of the development at Burlington Harbor Marina, including the parking, would be located on public property and subject to city leases that have strings attached: The perimeter dock would be open to all from 7 a.m. to 10 p.m., and the restrooms, store and event spaces would have to be accessible to the public, too.

A tentative agreement calls for a 40-year lease between the city and the developers. DesLauriers and Wallace would get $500,000 in public funds through tax increment financing — a strategy to pay for infrastructure by borrowing on future tax revenues. In exchange, they'd pay $27,500 in rent plus 5 percent of marina revenue exceeding $565,000 during the first year. After that, they would pay $55,000 plus 5 percent of marina revenue exceeding $1,130,000. They would also pay property taxes, but the amount has not yet been determined.

The proposed arrangements are outlined in a memorandum of understanding and draft lease documents the Burlington City Council approved in May. Every member voted in favor — except Karen Paul, who recused herself because her husband owns Colchester's Bay Harbor Marina.

The developers have until July 31 to complete due diligence and update their plan with more specifics. The goal is for the city and marina builders to sign a final development agreement in September. The project would still need permits from the city, the U.S. Army Corps of Engineers and the Vermont Department of Environmental Conservation.

The perimeter dock would double as a so-called wave attenuator, a floating system designed to calm waters without the environmental problems associated with a breakwater fixed to the lake bottom. Such traditional breakwaters can have a "bathtub" effect that compromises water flow and quality in the bay.

The Burlington harbor currently has a rocky breakwater that runs north to south, but it doesn't extend far enough to protect the proposed marina. It's unlikely that the Vermont Department of Environmental Conservation would approve any sort of extension; officials now favor the eco-friendly floating systems.

Some sort of wave breaker appears to be a prerequisite for the project, which was generated by the city's request for waterfront development proposals two years ago. Without protection, the boats would be tossed by the big waves that often form in Burlington harbor. "We get huge storm action and waves from the north," Wildfire said.

What do the citizens of Burlington think of the private marina plan? They've already started weighing in on the Burlington Community & Economic Development Office website.

"Let it be driven by the wind, not high octane," said one commenter, who seemed to be suggesting the proposal is too focused on motorboats.

Another commenter seemed to view a private marina as a luxury project Burlington doesn't need: "Protection behind the breakwater has been transformed into a floating hotel, largely catering to the wealthy elite, many from north of the border."

Despite such reservations, the project appears to be gathering steam and could be built regardless of what happens with the Moran Plant and the Community Sailing Center, both of which are poised for redevelopment.

"This marina would bring so much more business to the coolest little city on this planet," is how one commenter summed up the prevailing view.

But it just so happens "the coolest little city on this planet" is full of residents with their own strong opinions about new construction.

"It's Burlington, so you never know 'til you know," Wildfire said. "But we need more marina space. There's no doubt about that."