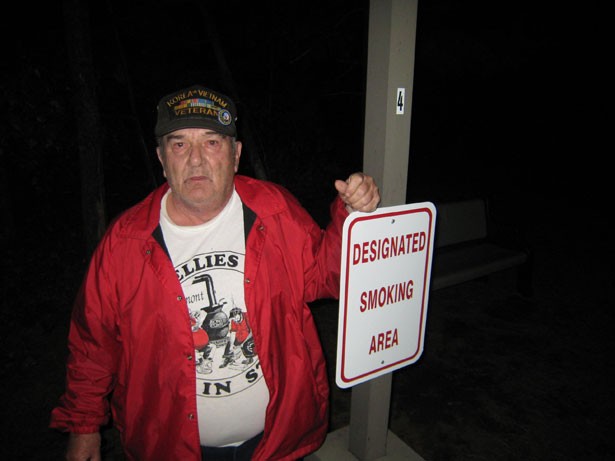 COLCHESTER - Reggie Peters, 73, started smoking while serving as a combat medic during the Korean War. Now a disabled veteran, he goes through two packs a day in his room at the Holy Cross Senior Housing in Colchester, where he's lived for the last 10 years.

That is, until smoking a butt became cause for eviction. A new Holy Cross ordinance prohibits smoking almost everywhere on the premises, including private rooms. A spokeswoman from the South Burlington-based Cathedral Square Corporation, which manages the center, claims a smoke-free environment serves everyone's best interests. But Peters and at least one other smoker counter that the ban threatens their health and privacy.

"I used to smoke to enjoy myself," Peters laments, speaking with a reporter on a recent Thursday evening in his apartment while rocking in a La-Z-Boy chair. "I'm gonna try to quit, but it won't do me no good." Peters says he spends four hours per day smoking in his car as a result of the new policy.

A 79-year-old Korean War veteran, who does not want his name used for this story, nods his approval from a far corner of the room. "This is an experiment, and if they don't get some static, they're going do this at the rest of Cathedral Square developments," he says. "But they're going to get static."

Under the new smoking policy, smokers are relegated to an unprotected plastic bench that sits 225 feet from the center's main entrance. "I think we're being deprived of our rights," Peters says. "I can manage . . . but I just can't see why we have to go so far from the goddamn building. This is bullshit in my book." He adds, "When it's cold, no one's going to go outside." His friend suggests Cathedral Square's policy change was motivated by insurance incentives.

Kim Fitzgerald, director of operations for Cathedral Square, disagrees. "The real reason is for health benefits," she says. "It's not only for the smokers themselves but for their neighbors. We were having a lot of issues with smoke that seeps through the doors that then impedes the neighbors around the smokers' units." According to Fitzgerald, the majority of Holy Cross residents are "thrilled" with the decision. Her company owns or manages 21 sites, most of them in Chittenden County.

A 2006 Surgeon General's report supports Fitzgerald's argument. It found that there is "no risk-free level of exposure to secondhand smoke" and determined that regulating airflow in buildings where smoking is allowed "does not eliminate exposures of nonsmokers to second-hand smoke."

Fitzgerald of Cathedral Square laughs off his suggestion. "Smokers are not a protected class," she asserts, "and as long as we apply our policy equally, then we're fine." As for Peters' claim about the smoking bench, Fitzgerald says Cathedral Square is planning to shelter it before winter.

Irving Stecklare won't likely be venturing out. A 68-year-old who has lived at Holy Cross for four years, he suffers from bone-marrow cancer and is trying to kick his longtime smoking habit. That doesn't mean he doesn't have strong feelings on the subject, however.

"It's just like all these politicians on the Holy Cross committee board, like Dick Mazza, to decide what's good for you and what's not good for you," Stecklare complains. Mazza, a Democratic state senator from Colchester, owns a general store in Colchester that sells cigarettes.

The new policy "opened up a can of worms," Stecklare concludes. "I think they should've just left it alone."