The idiom "love at first sight" is largely a chimera — more myth than reality.

"Love at first bite" is a more common experience.

I remember the anticipatory tingle when I first saw vibrant fuchsia raspberry sorbet ribboning out of Shy Guy Gelato's machine on social media. My inaugural mouthful shone with pure fruit flavor, confirming that I would embark upon a long-term relationship with the velvety frozen confection.

By contrast, the first time I met my husband, I was not the least bit interested in him, nor he in me. It took us more than two years to meander toward a first date and another seven years to get married, but we'll celebrate our 37th Valentine's Day this month.

We're not big on gifts, but we usually manage to do something delicious to mark the holiday: a spread of sushi in front of the fireplace or an array of Vermont cheeses (heart-shaped Champlain Valley Creamery triple crème!), nuts, fruit and crusty bread with a good bottle of wine.

Sometimes we even remember to buy cards for each other.

It's not too late — yet. Here are three small pleasures and one romantic story to inspire to your Valentine's celebration.

Cutesy heart-shaped foods abound on Valentine's Day. These anatomically correct(ish) veined and valved pairs of filled hearts from Farmhouse Chocolates caught my attention for their ironic nod to the annual heart bandwagon.

My first bite through the 70 percent dark-chocolate shell into the rich whiskey-infused ganache made with Vermont heavy cream sealed the deal. The chocolates offer brightness grounded by fruity and pleasantly bitter notes with a soft, heady center, just like the journey of love.

All of Farmhouse Chocolates' truffles, bars and chocolate-enrobed caramels are made with certified organic, fair-trade dark chocolate. "We do dark and darker," said Eliza La Rocca, 36, who co-owns the Bristol company with her husband, Erlé LaBounty, 40.

That theme carries through at multiple levels in their Darkest Hearts seasonal offering.

"It's a little dark to eat a heart that looks — as much as chocolate can look — like a real heart," La Rocca said. "The name is also suggestive of darker, sensual pleasures, if one likes. I think dark and light, intense and playful are all much closer and connected than perhaps we think."

The anatomical hearts also "reflect our own sensibility around Valentine's Day," La Rocca said. "We don't take it too seriously."

The couple first met in 2010 at a Woodstock restaurant where La Rocca was working and LaBounty, a New England Culinary Institute graduate, had previously cooked. Their relationship was not quite love at first sight — at least not on La Rocca's side.

She remembers thinking, "He's kind of funny, he's short, and he keeps staring at me." LaBounty, however, said he was immediately intrigued by "the new girl" at the restaurant. It only took until their second date for La Rocca to catch up. "I was lovestruck," she said.

The two are very different. "He lived in a cabin in Vermont without electricity until he was 13," La Rocca said. "I grew up in the New Jersey suburbs." But they bonded through their intense work ethic and love of good food, and "we make each other laugh," she said.

Many Vermont independent and specialty stores sell their year-round line of chocolates, but the Darkest Hearts are available only online or at their Bristol factory store. They offered them last year for the first time, though with a different filling and in sets of three instead of the current pair. "That really messed with people," La Rocca said with a laugh. "They had to decide if they were going to share the third one or fight over it. It was like a social experiment."

On a recent freezing, windy Saturday afternoon, I was nearly blown away at Earthkeep Farmcommon, formerly named Nordic Farm, on the crest of Route 7 in Charlotte. I was there to pick up my order of Vermont shrimp bisque made with crustaceans raised in the property's old calf barn.

I was tempted to join the shrimp in their 80-degree saltwater tanks but instead dashed home to heat up my frozen bisque with a good splash of half-and-half. It was delicious, with a sweetness to balance the oceanic brine and deep shrimpy flavor. We dined happily that night on bowls of the rich soup, alternating spoonfuls with bites of a fresh baguette and a simple green salad with a mustard vinaigrette. It was the perfect light — but indulgent — supper for two, ideal for a cozy and romantic night in.

Prior to the pandemic, seafood farmer John Brawley sold most of his Pacific white shrimp, shells and heads intact, to local restaurants. Due to sharp swings in demand since March 2020, he's added more direct-to-consumer items, including the bisque. I ordered it on the Sweet Sound Aquaculture website, but it's also for sale at Lantman's Market in Hinesburg and the Vermont Food Collaborative in New Haven. Look for it in more retail outlets soon. 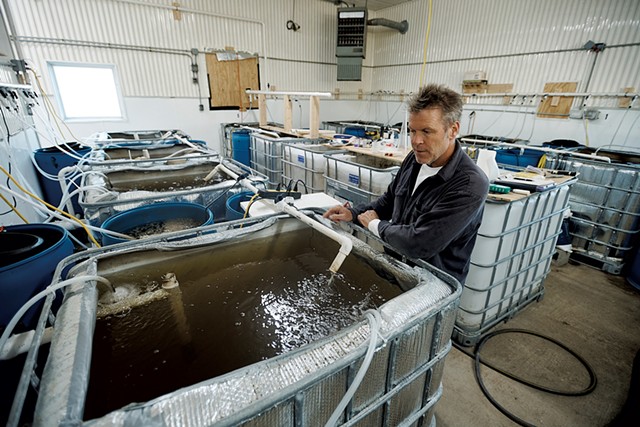 Brawley, 55, partnered with Joe Buley, chef-owner of Joe's Kitchen at Screamin' Ridge Farm in Montpelier, to create the soup. The result successfully conveys "the essence of the entire shrimp," Brawley said.

Buley said he aimed for a classic French-style bisque but added a few tricks of his own. He roasts the Vermont shrimp with heads and shells on until they turn golden brown and then simmers them with caramelized fennel, onions, carrots and tomato paste before straining out all the solids. The gluten-free and dairy-free soup (unless you add dairy at home) is thickened with rice and scented with fresh tarragon.

The chef recommends adding a splash of cognac or anise-flavored Pernod while heating the bisque. To elevate it even more, he suggests garnishing bowls with a little whipped cream, freshly chopped tarragon and a sprinkle of chile flakes. "Not enough to make you sweat," Buley said with a laugh. "Your date will do that."

I'm not the only one planning to order pints of Shy Guy Gelato for Valentine's Day. Charlotte shrimp farmer John Brawley and his girlfriend, Liz Walker, are serious fans, too. Their favorite trio is salted maple, hazelnut, and the impossibly smooth and creamy (but vegan!) dark chocolate sorbet.

Although several local ice cream makers now offer winter pint preorders, Shy Guy was the OG and my first love. I'm actually a more regular customer in winter than in summer, when there are many other pleasures to lift my spirits.

My favorite is the raspberry sorbet, which evokes childhood memories of jamming fistfuls of just-picked berries into my mouth. But many of the creative, chunky combos also call to me. My peanut butter cup itch is scratched with great satisfaction by the peanut butter gelato with candied peanuts and nuggets of chocolate. The honey sea salt with Toblerone is another must-have if it's on the list of six weekly rotating flavors, announced every Monday via Shy Guy's social media and website. On the simpler side, the Greek yogurt delivers sweet purity with just the right hint of tart.

Shy Guy co-owner Paul Sansone, a Jericho native and lifelong restaurant cook, sold everything he had, including his cellphone and car, to escape to Italy just over a decade ago. There, he fell in love with gelato, which includes less air, less cream and fewer egg yolks than traditional ice cream.

With business partner Tim Elliott, Sansone, 41, refined his recipes and started Shy Guy out of Elliott's apartment in 2014. Two years later, they launched a cart on Church Street and opened their St. Paul Street shop. The cart now appears exclusively at events, including at a steady stream of weddings of devoted customers. "It's such a sweet thing," Sansone said.

The winter preorder pint program was born out of pandemic necessity to keep the enterprise afloat during its slow season. It runs from November 1 — Shy Guy closes the scoop line after its free cone day on Halloween — to the weather-dependent scoop reopening day, usually in mid-April. In the summer and fall, pints are only sold in person at the shop.

If you're planning to share a pint with your sweetie(s) this Valentine's Day, make sure to order before the Thursday evening deadline, or cross your fingers and walk up during pickup hours on Saturday, February 12, for any that remain.

Normally, pint pickup hours are on Fridays and Saturdays, but this pre-Valentine's Day weekend Sansone will be away and could find backup only for Saturday. He has his priorities straight and will be visiting his girlfriend, who is in nursing school out-of-state.

And, no, the gelato maker will not be packing any gelato for the trip. "She'd take a cookie any day over gelato," he said with a laugh.

Small Pleasures is an occasional column that features delicious and distinctive Vermont-made food or drinks that pack a punch. Send us your favorite little bites or sips with big payoff at food@sevendaysvt.com.