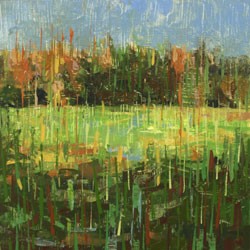 Middlebury’s Edgewater Gallery calls its current show “Short Stories,” but the title is only partly literal. All of the 100-plus works on display are indeed short, as in no more than a foot or so tall. Many of them, however, do not tell a story, as in a readily comprehensible narrative.

Phyllis Demong, for example, assembles found objects into visually appealing forms that have no beginning, middle or end. These asymmetrical but well-balanced arrangements do have a vaguely nostalgic quality. It’s as though random bits of tattered material — a torn tape-measure segment, a shard of jagged wood, a discarded ticket stub — are meant to suggest fragments of memories. Stenciled numbers appear, as well, on some of her pieces, perhaps as a personal means of cataloguing.

Carolyn Shattuck does something similar by grouping together seemingly unrelated images and noncomplementary colors. The effect is somehow harmonious, however. In one of her energetic monotypes, which bears some resemblance to a Jasper Johns collage, Shattuck juxtaposes a cartoonish silhouette of a gesticulating female with a couple of vaselike shapes and an array of background patterns that could be wallpaper. The title, “Cocktail Party I,” may cause a viewer to nod in “oh-I-see” agreement.

Edgewater’s curators have included a mix of media as well as styles in a show where physical size is about the only common denominator. The quality of work also varies widely, as is to be expected when 27 artists, mostly from Vermont and none with big reputations, are shown side by side.

One of several fiber artists represented in “Short Stories” stands out not only for her distinctively composed Vermont landscapes but for the technical proficiency required to produce them. Deborah Sharpe-Lunstead applies pigmented pulp paper and plant fibers to wet sheets of handmade paper, causing the image to be absorbed into the drying surface. The result can be dazzling.

Cameron Schmitz also depicts recognizable Vermont scenes in an oblique manner. This talented young artist has two sets of works in the show, each defined by a seasonal palette.

Green predominates in the first grouping of three oils, but the color is glimpsed through blue, gray and purplish streaks resembling rain. Blurry tree shapes can be discerned in the distance in each of these works.

In four even smaller paintings, viewers enter a late-autumn forest where brown, orange and lime convey a melancholy mood. Schmitz knows how to combine colors to elicit emotional responses, and she’s able to conjure moments and places of mystery. She sometimes uses these techniques to go beyond the representational realm. In the last of this four-part series, reading from left to right, Schmitz has transformed the dense but dying foliage into a swirl of scratchings illuminated by a burst of light near the center of the panel.

Sara Katz can employ her palette to evocative ends, as well. With the exception of “Charlotte Boat Yard,” an impressionist study of masts in a Lake Champlain harbor, Katz’s pieces are noteworthy for the disconnect between her cheery yellows and pastels and the dreary built environments she takes as her subjects. Scenes of distant roadways, passing trains and light poles punctuating flat expanses look like they were sketched far from Vermont, even though a couple are labeled “Hudson Valley.”

Katz is working here in Rackstraw Downes’ territory. The much older, British-born artist also paints generally unpeopled tableaux of parking lots, highway overpasses and undistinguished buildings, looking for beauty amid the ordinary. Katz’s hazy renderings, however, are far less sharply defined than Downes’ photo-realism. In fact, a smudgy element highlighted in one of her titles — “Burned Building” — may be glimpsed only in the far distance, if at all.

Katz’s objective forms can also be conspicuous without necessarily being decipherable. That’s not actually a row of Santas riding go-karts in “Canadian Highway,” is it? Either way, Katz qualifies as one of the artists in this eclectic show whose works do tell stories, or at least resemble brightly lit stills from a road movie.