Slope-Side Spots to Eat and Drink in Vermont This Winter 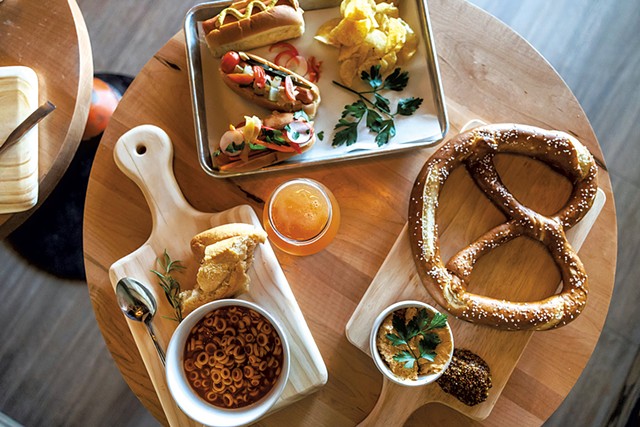 The first snow of the year has fallen, and Vermonters have ski season on the brain. As you dig out your goggles and make sure your snow pants still fit, why not find a new pre- or post-mountain stop for your winter routine?

Sure, resort restaurants and cafeterias will fill you up, and it's easy (and cheap) to pack a sandwich and a thermos. But beyond the lodge, you'll find plenty of cozy drinking and dining spots — destinations in their own right — that just happen to be right near the slopes.

Here are three bars and restaurants, from tried-and-true to brand-new, that are ready to fuel your winter adventures.

Board on the Mountain

It's no surprise that Stowe has a strong après-ski scene. The mountain town draws winter enthusiasts from near and far, and it boasts a wide array of restaurants, bars and tasting rooms to revive them after a long day of skiing, riding, tubing or snowshoeing.

New among them is Après Only, which opened this fall in the Field Guide Lodge, complete with 1980s ski décor, local booze, snack boards and "shotskis."

On a recent evening, groups of all ages stayed snug under heat lamps on Après Only's covered deck. Inside, several couples gathered on worn leather couches and sheepskin-draped chairs around a freshly lit woodstove, sipping equally warming flights of Vermont bourbon. Their children played board games from the hotel's extensive collection on an orange shag rug nearby — and a game of hide-and-seek behind the bar's eclectic furniture.

Beyond the bourbon, Après Only's drink list is a who's who of local beer, cider, wine and canned cocktails. Black Flannel Brewing, Mount Holly Beer, Fiddlehead Brewing, Outer Limits Brewing and Lawson's Finest Liquids are represented just among the IPAs on draft.

The bar's snacky foods — from fancy bites to slope-side lunch box classics — are served entirely on wooden boards. An elegant charcuterie and cheese spread and decadent chocolate-coconut cake from Stowe's Shugah Cookie Baking pair unexpectedly with Swedish meatballs and an oversize warm Bavarian pretzel bigger than the board itself. A bowl of organic SpaghettiOs is described on the menu as "a childhood classic that mom never let you have."

That sense of nostalgia fills the entire space, which features a wooden toboggan propped up near the woodstove, vintage ski suits hanging on the walls and Brat Pack movies playing on TVs near the bar. What could be warmer after a cold day on the slopes?

As the proprietor of the Wild Fern — the only eatery in the town of Stockbridge, population 718 — Heather Lynne could get away with turning out less-than-stellar fare. But Lynne, 52, a friendly and energetic baker and musician, wouldn't think of it.

Since she opened the Fern in 2012 with partner and bandmate Rick Redington, Lynne has been serving hearty baked goods and local, organic pizza with sides of live music, Grateful Dead-inspired art and cozy atmosphere. She's built a loyal following of locals and second-home owners, as well as people visiting nearby Killington, Pico and the Middlebury Snow Bowl.

"We've survived on all walks of life," Lynne said.

On a recent Sunday morning, Lynne was behind the counter in overalls while a few customers ate and Redington warmed up on a cigar-box guitar in the back of the narrow roadhouse. On the menu were home-baked bagel breakfast sandwiches with eggs, spinach, caramelized onions and Cabot cheddar, with roasted potatoes and the option of bacon from Roma's Butchery in South Royalton. Lynne was also serving sourdough waffles with maple syrup and blueberries. To drink, she offered drip coffee and a house pumpkin chai latte with oat milk.

The Fern's hours are limited, so it's best to check the restaurant's Facebook or Instagram page before heading over. Usually, it's open for Sunday brunch from 10 a.m. to 1 p.m., with live music starting around noon. Thursday is pizza night; customers preorder in the morning and pick up their pie after 5 p.m. for eat-in or takeout. Redington hosts a pizza night (with his own menu) and song circle on Wednesday evenings from 6 to 9 p.m.

The unassuming café has had previous lives as diners under various owners and, after Tropical Storm Irene flooded much of the town, even served for a while as the Stockbridge town offices. No other restaurant there has lasted longer than five years, but the Fern just celebrated its 10th birthday. Lynne seems to have found the right formula. 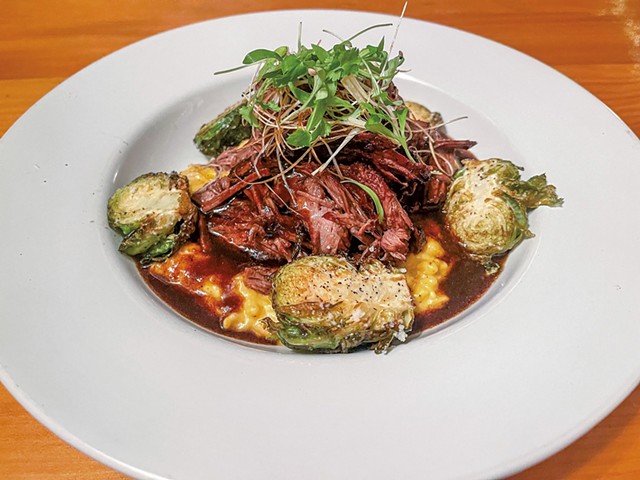 The town of Montgomery is known for its covered bridges and proximity to the Canadian border and Jay Peak ski resort. Not surprisingly, there's no shortage of places to grab a meal and a bed.

The Black Lantern Inn is one such establishment. Its reasonably priced rooms have a friendly, country vibe, sporting vibrant quilts, rich-colored wood and delicate floral wallpaper.

That aesthetic continues in the inn's restaurant, with rustic timbers in the ceiling and barn boards on the floor. At first glance, the menu is similarly traditional, packed with pub fare such as burgers, French onion soup, fish fingers and barbecue steak tips.

Look more closely, though, and you'll notice surprises. Mussels come in a warming poblano chile broth, garnished with crumbly cotija cheese. Local meats and vegetables abound. The corn tortillas used in a variety of tacos are handmade by head chef Hersson Villatoro, who is about to celebrate a year at the Black Lantern.

Villatoro was born in Guatemala, but his family immigrated to the United States when he was young. In 2018, his previous restaurant, in Marlborough, Mass., was selected by Travel + Leisure as one of "The 25 Best Diners in the U.S."

What's the secret to the chef's success? Villatoro, who lives with his wife and children on her family's land in Bakersfield, believes that it's his passion for marrying the flavors of Central America with familiar ingredients — and packing flavor into every part of each dish.

Villatoro's pot roast is a perfect example: From tender, wine-braised beef and pumpkin risotto to Brussels sprouts and blueberry glaze, each component is enticing and harmonious. Other highlights include the brisket, the fish tacos, and the kale salad studded with corn, chèvre, roasted pumpkin and candied walnuts.

How are the folks of Franklin County taking to the chef's twists on old favorites? As evidenced by an almost rowdy crowd on a Saturday night, "They love it," Villatoro said. He added that his specials, such as pupusa corn cakes with shrimp and ranchero sauce, often sell faster than he can make them.