Is foraying into fondant really a piece of cake? 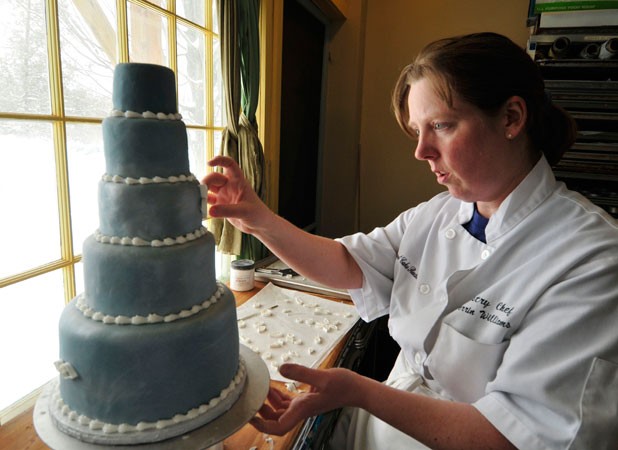 I tell myself not to expect anything like Charm City Cakes. Surely there can be no comparison between the colorful, sprawling “Ace of Cakes” work space I watch on the Food Network and the shop where I am headed in Waterbury Center. But both bakeries turn out such enticing, sugar-packed creations that I can’t help but feel an excited thrill as I trudge through the snow to the door of Vermont Cake Studio, which specializes in custom wedding cakes.

Once inside, I see the studio scarcely allows more standing room than my own narrow kitchen. Instead of whimsical cakes lining the tables, the place is packed with stainless-steel appliances, including the largest stand mixers and whisks I’ve ever seen. The unmistakable scent of sugar and butter wafts from a massive oven, evidence that owner and pastry chef Perrin Williams has already been busy before my 10 a.m. arrival on a recent Sunday. She’s agreed to let me spend the day under her wing as something of an apprentice baker. I’m just glad she didn’t enforce her usual 5 a.m. wake-up call.

Ever since sitting in on a cupcake tasting last summer (such is the difficult life of a maid of honor), I’ve been fascinated with frosting and fondant. I’ve never had the patience for pastry bags in my own kitchen projects, and fondant seems insurmountably fussy, but I can’t argue with the results: pretty cakes. From frosting pearls to sugar flowers, these fancy concoctions seem like the glamorous older cousins to my single-layer chocolate-pear or one-bowl strawberry pound cakes. In short, it’s become painfully obvious that my baked goods need a serious makeover.

Before I’ve even tied on my apron, Williams has cut out circles of parchment paper to line the bottoms of two small cake pans, and divided vanilla-butter-cake batter between them. The next minute, she’s giving a quick chop to a hunk of bittersweet chocolate the size of a cutting board, then popping the pieces in the microwave to form the basis of her chocolate ganache.

A bride and groom will arrive shortly for a tasting, she tells me, pouring the now-melted chocolate through a fine-mesh strainer. Though their wedding at Stowe Mountain Lodge is about half a year away, they’re right on schedule — unlike some couples who call wanting a cake made that day, Williams says. That’s a tall order, considering she and her assistant pastry chef, Kirsten Stetler, work on no more than two cakes per weekend.

It takes three days to make a fancy cake, I learn: Williams bakes on Wednesday, fills on Thursday, frosts on Friday and delivers on Saturday. “Anyone who tells you they do it differently is probably not telling you the truth,” she says. “You obviously can’t do it all in one day.” As Williams pipes frostings and fillings into different swirls on tasting plates, she tells me about a wedding order she once took for 300 individual Trinidadian fruitcakes. Each one took three hours to make.

After all that, do sweets still hold their appeal?

“I definitely love cake,” Williams says. “My test for recipes is: Do I want to wake up at three in the morning and ... crave this? If not, it’s back to the drawing board. But at the end of the day, I want to go home and have steak. Or salad. You know, nothing with sugar in it.”

We exit at the back of the kitchen through a hallway, which leads into the Center Bakery and General Store. Williams, who opened VCS in 2005 and lives in an apartment upstairs, bought and remodeled the adjacent general store three years ago, adding a café for soups, salads, pastries and more. It’s here that cake tastings take place — and, before Williams can even turn on the coffeepot, the bride and groom arrive, with one set of parents in tow.

Williams, who slipped back to the kitchen for a few minutes, emerges with the perfect little layer cake I watched her stack and frost earlier. Now it miraculously sports elegant piping and shaved chocolate curls.

The clients tuck into the sweets. There are fluffy vanilla and chocolate cake wedges, chocolate mousse, Bavarian buttercream, truffle cream, chocolate ganache, chocolate chiffon, Chambord buttercream and white-chocolate buttercream. After a few bites, the bride — apparently sugared out — puts down her fork.

“I don’t eat dessert a lot,” she remarks. “I’ve never eaten the cake at weddings, anyway.”

But if there’s a wedding, there must be cake — or so it seems. “This is cake-tasting season,” Williams told me earlier. Countless lovebirds have become engaged over the holidays, and still others are knee-deep in planning summer nuptials.

After admiring photos of the bride’s gown — a stunning Spanish number with unusual hem and waist details — Williams announces, “I’m all done, artistically.” This seems to surprise the wedding party, who have only just decided to do a half-vanilla, half-chocolate cake, and are still considering whether they’d like to incorporate the teal of the bridesmaids’ frocks.

But Williams has her inspiration: She wants to translate the wedding-dress details to fondant, and perhaps enhance the cake layers with fresh hydrangea blooms. It fits the bride’s request for a simple yet sophisticated piece. The party exits, promising to follow up with fabric swatches.

“Sometimes people are very forthcoming and know exactly what they want. Other times, they’re looking at you to direct them,” Williams explains. I can see why she took the reins on this design — more than an hour into the tasting.

Turns out, many brides are looking for the same theme, anyway. “In the ‘city,’ you’d call it ‘shabby chic,’” Williams says, “but here it’s called ‘rustic elegance’” — probably because most Vermont vows take place in barns. Clients want to incorporate natural elements into their cakes, and that’s one reason Williams has become rather good at creating a birchbark effect with buttercream and chocolate shavings. Along with red velvet cake, it’s one of the most popular requests she’s had for the upcoming year.

The rest of the afternoon, however, is devoted to cake design with a winter theme. Williams is working on a display cake for a Vermont Wedding Salon photo shoot, and she’s already rolled narrow strips of white gum paste into small spirals, creating snowflakes with a quilling effect. It looks stunning, but even she admits it’s a tedious process.

Under Williams’ instruction, I try to wrap strips of the gum paste — a stiffer form of fondant that dries hard — around a tiny dowel, but the stuff quickly becomes brittle and cracks. My clumsy attempts to smooth it back together yield misshapen little curlicues. After 10 minutes with no improvement, I give up.

“One of the weird things about what we do is that it’s art, but it’s edible,” Williams says. “Dessert seems to be one of those things everybody thinks they can make.”

It appears I’m just such a person. A few days later, I wander through a craft store, my heart still set on making a beautiful, two-tiered, fondant-covered cake. I wonder if I’m being fearless or simply foolish by testing Williams’ theory that complicated cakes should be left to the professionals ... but whatever. Even though all I did was play around with some gum paste, I’m hoping I’ve absorbed some handy tricks of the trade from my day at VCS.

It feels wrong to be grocery shopping at Michael’s. While I’ll be making my own buttercream, I decide to shell out for some white fondant (seriously, the stuff is $17 for two pounds). Composed of gelatin, confectioner’s sugar, corn syrup and glycerin, it’s still a mystery to me.

At home, I open the bucket, only to be bowled over by an artificially sweet smell. I hesitantly nibble a small pinch. The fondant is like Pillsbury frosting out of a can with the texture of Play-Doh. The very last thing I want to do is put it on my homemade cake.

In fact, I have high hopes that this is the best vanilla cake I’ve ever made. It’s moist, delicately sweet and dense enough to stack well. And my vanilla buttercream is silky perfection. For extra creaminess, I whisked flour, vanilla and milk over medium heat until they thickened, before beating them into whipped butter and sugar. I’m tempted to eat it by the spoonful, but instead I take a tip from Williams and pipe a frosting border around the edges of two layers. I fill the well inside the border with a semisweet chocolate ganache before stacking and frosting.

I have two 9-inch and two 4-inch rounds, essentially ready to eat ... but they look as vanilla as they’re going to taste. I sigh and reach for the fondant. After rolling it out, I enlist my boyfriend’s help in lifting and draping the sheet over the cake. Then I work quickly, trying to smooth it.

But I’ve put on too much buttercream. As I fruitlessly try to pat out the many wrinkles in the fondant, the frosting starts to ooze out the bottom, giving my cake a bulbous shape.

Disheartened, I shove it all in the fridge and leave it overnight.

The next day, with newfound resolution or perhaps wild abandon, I decide to cover the wrinkles with a wide fondant ribbon around the bottom of each layer. Now that the cake is cold and hard, applying the fondant is much easier. I slap it on.

At some point, I realize I’ve exited the realm of baking, and am just doing arts and crafts. The thing I’m working on doesn’t even seem edible. I fill two pastry bags with decorative icing, tinted kelly green and aqua, and begin to embellish the white surface with the vine-like spirals and flourishes that I usually doodle on scrap paper. That ... doesn’t look bad, actually. In fact, I do so much intricate piping that it essentially hides my fondant flaws. I end up with a slightly lopsided work of art — nothing as lovely or polished as you’d find in a cake shop, but I’m proud nonetheless.

Eating it is a total afterthought. Once my coworkers have ravaged the cake’s top layer the next day, I cut a slice and peel off the fondant. The chocolate ganache nicely accents all the sweet vanilla, but, honestly? I’m not in the mood for cake. I could really go for a salad.

For a recipe for maple wedding cookies, head over to our staff blog, Blurt.