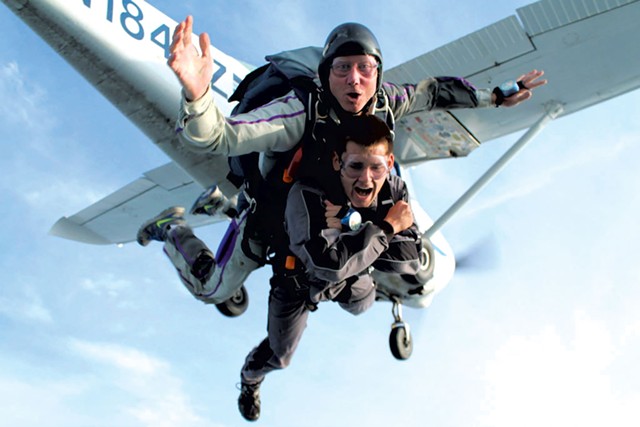 When Ole Thomsen steps out on weekends, he's setting himself up for quite a fall — 12,000 feet, to be precise.

The 53-year-old Montréal native is founder and co-owner of Vermont Skydiving Adventures in West Addison. Established in 1992 at the Franklin County State Airport in Swanton, the skydiving school quickly relocated to Shelburne, then to its current location, on a private airstrip behind a former donkey farm aptly named Ass-Pirin Acres.

Thomsen remembers seeing skydiving on television as a kid; when he turned 18, he began looking for places to learn it. Three years later, in a bar, he overheard someone mention that he'd learned to skydive in Malone, N.Y. Thomsen drove there the following week and did his first jump over Labor Day weekend 1984. He returned a week later to repeat the feat and was hooked.

In the 32 years since, Thomsen has completed about 11,500 jumps. Between May and the end of October, he works full time as a skydiving instructor — or, as he puts it, "as full time as a summer-weekend, weather-dependent business in Vermont gets."

Thomsen says he can teach almost anyone to tandem skydive — that is, skydive harnessed to an instructor — in just 20 minutes. Students go up in one of the school's two Cessnas. In the absence of cloud cover or ground winds exceeding 14 miles per hour, they can jump from 9,000 to 12,000 feet up and free-fall for about 30 seconds.

Last week, Seven Days caught up with Thomsen on the ground. He sported a Vermont Skydiving Adventures T-shirt that read, "What could possibly go wrong?" I asked him that question in light of last August's "hard-landing" death of Joe Crossley, a 68-year-old instructor at the school. Witnesses reported that Crossley, who'd been skydiving for 49 years, appeared unconscious before his landing.

SEVEN DAYS: Have you ever had anything go wrong while you were skydiving?

OLE THOMSEN: No. Of course, we jump with two parachutes, and today they're all modern. There's a computer on the parachute, so if you forget to pull [the rip cord], the computer will open it for you — if you get knocked out or get complacent and forget your altitude. I've used my reserve parachute five times in 32 years. It's not really scary, because you train for it. So when [a parachute failure] does happen, it's a confidence builder.

SD: You're more likely to get killed in the car on the way to skydiving, right?

TO: That is a fact. If you want the stats, it's more dangerous to ride your bicycle [or] to drive in a car with a driver between the ages of 16 and 21. It's also more dangerous to work on a farm or work in construction.

SD: Have you jumped from high altitudes?

OT: Oh, yeah, but not in our planes. Other centers have high-altitude jumps where you have to have oxygen on board. The highest I've done was from 24,000 feet. It's like a novelty jump. It costs more money, but it's fun to do every now and then.

SD: How about from different kinds of aircraft?

OT: Oh, yeah. Hot-air balloons are fun to jump out of, because they're stationary. Plus, the ride up is fun, and when you jump off, it's quiet and very peaceful. Helicopters are fun, too. The ride is just as fun as the skydive. Again, the exit is cool because you're not moving, just stepping out.

SD: Have you flown a wing suit?

OT: Oh, yeah. They're a popular item. You're your own flying squirrel through the sky, and it's really, really fun. We offer the training for them, but you need a minimum of 200 skydives before you can try one.

SD: Is Vermont a nice place to skydive?

OT: Well, I'm biased, but I would say it's the prettiest place in the United States to skydive. We've jumped in Brazil, right by the ocean. That was really pretty, too. A lot of our people come from all around, and they're like, "Wow." It's just jaw-dropping when you're up there looking across the lake and the mountains.

SD: Who are the oldest and youngest skydivers you've taught?

OT: You have to be 18 years of age to sign the waiver. Otherwise it won't hold up in a court of law. The oldest skydiver we've had was a 92-year-old woman.

OT: She had a blast.

OT: It's a people sport, so just meeting all the people. When someone shows up and wants to do a tandem skydive, of course they're nervous, they're scared, but they've come this far. Once you take them up and land with them, the adrenaline and excitement just feeds you.

SD: Have you had any unusual requests from your customers?

SD: Anything else people should know about this sport?

OT: What can I say? It's not for everybody. Some people say you must have a death wish to skydive. It's actually the opposite. You have a life wish. It's like any activity. You can be afraid of life and sit on your couch and do nothing, or you can go biking, hiking or skydiving. When we're on our deathbed, what do we remember? Our memories, or how much money we made? I'll take the memories.

The original print version of this article was headlined "Free-Fallin'"