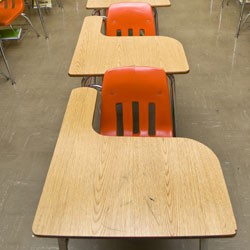 Years ago, it wasn’t uncommon for Vermonters to pull their kids out of school for a week or two to go deer hunting or to help with the fall harvest. Teachers and principals didn’t consider those absences “truancy” — just standard seasonal obligations.

Not anymore. In the last several weeks, school districts and supervisory unions around the state have sent letters to parents informing them of new mandatory attendance policies that take effect this school year. Policies differ from district to district, but it’s safe to say that excessive absences, both unexcused and excused, can trigger letters to parents, mandatory meetings with administrators and social workers, and even possible legal action.

The new attendance standard came from the Vermont legislature via the Vermont Department of Education, which in 2009 issued a directive to districts and supervisory unions designed to crack down on chronic truancy. The goal is to maximize the time kids spend in school, which correlates to better graduation rates. But some parents feel the new policies unfairly undermine their authority to determine legitimate reasons for their children’s absence.

Several weeks ago, for example, the Williston School District sent letters to parents informing them that, as of the 2010-11 school year, parents will automatically be notified when a child misses 10 days of school. Missing 15 days of school requires the parents and child to attend a mandatory meeting with administrators and counselors, and 20 absences or more could be referred to the Chittenden County state’s attorney and the Vermont Department for Children and Families.

Under the new policy, legal action can be initiated for “excused” absences, such as those due to illness, bereavement, family vacations, religious observances or time spent with parents home on leave from a military deployment. One Williston mother complained that the new policy makes all absences seem “criminal,” regardless of their cause.

“What if it were like H1N1 last year, when kids were getting sick left and right?” asks the mom, who did not want to be identified. “If my kid has a 103 temperature, you don’t want them in school with you, and I’m not sending them. But I should be able to make that call.”

Such reactions are understandable, concedes Barbara Crippen, the DOE’s legal counsel, but she says they’re unwarranted. The new policy isn’t meant to punish kids who occasionally get the flu or have a death in the family. Instead, this “family intervention team” model is designed to help students who may be dealing with more serious issues at home, such as mental illness, poverty, abuse, neglect, or drug and alcohol dependencies.

“We had one parent who was calling her kid in sick 119 days, all considered ‘excused’ absences,” notes Martha Maksym, director of community investments at the United Way of Chittenden County. Maksym heads the Chittenden County Truancy Project, a 12-year-old effort to increase high school graduation rates countywide. “This is really about school success,” she says. “It’s really important for kids to be in school.”

The Truancy Project was launched in the late 1990s because three of the four high schools with the state’s highest dropout rates — Burlington, Winooski and Milton — were in Chittenden County. At the time, Burlington High School’s annual dropout rate was nearly 10 percent, or about 100 students per year.

The first step was to determine why students were dropping out. Unsurprisingly, the researchers found that a strong indicator of success was whether kids were actually attending school, and whether they had a responsible adult at home who cared if they made it to class.

Educators also discovered that when schools didn’t started paying attention to truancy until high school, “They absolutely missed the boat. It’s way too late,” Maksym says. Since compulsory education in Vermont only runs to age 16, “kids know that at 16, they can walk.”

During the 1998-99 school year, Burlington initiated a new attendance policy, similar to the one Williston just adopted. Parents objected then, too. As Maksym recalls, some complained that “taking my honor student to Europe for a week” was a legitimate excuse, while others argued that deer camp was more important than math and social studies.

“We really wanted to get out of the business of having the schools make value judgments about why the kids weren’t there,” she says.

Despite the parental push back, by the 2008-09 school year, Burlington’s dropout rate had fallen to 3.5 percent. The success in Burlington and other districts with similar policies, including Rutland, led the legislature to pass Act 44 in 2009. Among other things, the law requires the education commissioner to set up a working group to study truancy and come back with legislative recommendations. Since then, the DOE has posted Chittenden and Rutland counties’ attendance policies on its website, and has encouraged other districts to standardize their policies.

While some parents may still be concerned that an illness-prone child will end up in family court, Maksym calls that “a nonissue.” She says the state’s attorney’s office already has its hands full with serious truancy cases and devotes one day per month to the truancy docket. Ultimately, Maksym says, the goal isn’t to be punitive, but to get kids the services they need, ideally before they end up in criminal court.

As she puts it, “The court isn’t going to take the case if a kid misses 20 days for a kidney transplant.”