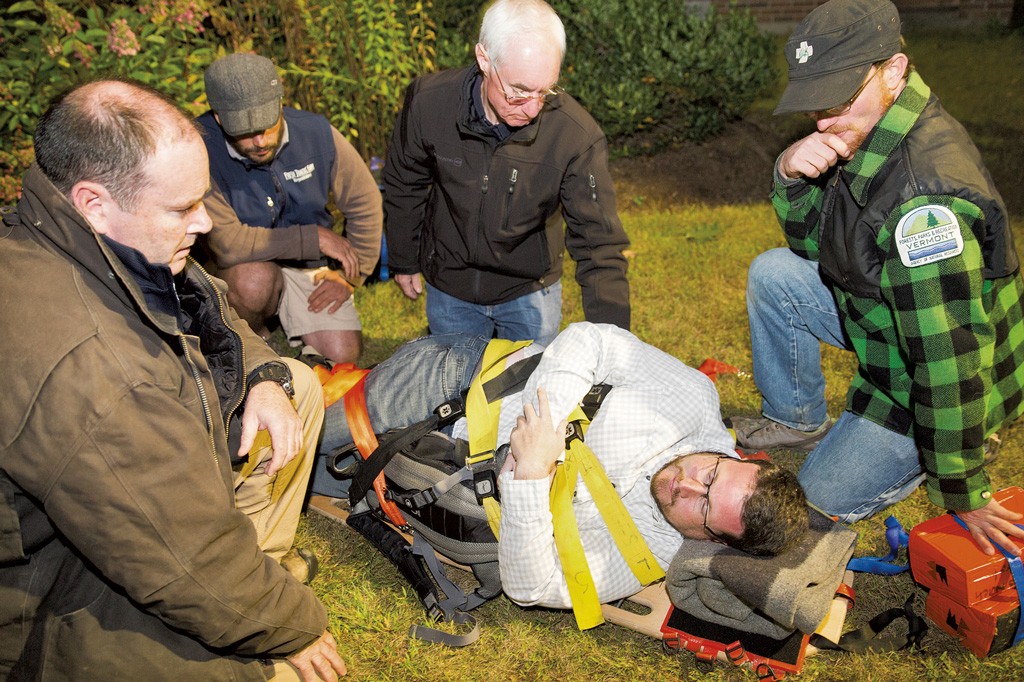 Multicolored leaves are pretty, but many Vermonters are more interested in the monochromatic color scheme that comes after the next seasonal shift. For them, when the Green Mountains turn white it means just one thing: sliding down them on skis or snowboards. Autumn, though crisp and pleasant, must be endured until the slopes open up.

Those mountainsides would be less enjoyable and more dangerous were it not for the National Ski Patrol, the largest outdoor rescue organization in the world. With nearly 30,000 members, the NSP has played a crucial role in popularizing and legitimizing the sport of skiing. Its volunteer patrollers are part EMTs, part expert alpinists and part small-town sheriffs.

Friedman adds that Mad River's 80 NSP members include five physicians, who are able to provide medical care for injured skiers before they're taken, if necessary, to a nearby hospital.

Vermont is the birthplace of the NSP. Founder Charles Minot "Minnie" Dole was inspired to create the service in 1938 after sustaining an injury on Stowe's Mount Mansfield. Today, the state is home to 23 NSP teams (some resorts have private patrols). Their members survey and report on trail conditions, attend to emergency situations, and contribute to maintaining a slopeside community. The organization's motto: "Safety and Service."

Perhaps the most impressive thing about ski patrollers is their dedication — many have patrolled the mountains for decades. Louis Carter of Jay Peak's patrol recently marked 50 years of supervising slope safety. Rick Hamlin, now the NSP's national historian, has been a patroller for more than four decades.

One might assume ski patrollers to be young and robust, but the average age skews closer to 50. When ski patrollers are faced with life-or-death situations on a dark, icy mountain, experience trumps youthful vigor every time.

Though small, Vermont is one of the most popular skiing destinations in the union, so the NSP has divided it, more or less, along Route 4, into northern and southern regions. Each has its own governing body. Both regions are in the Eastern Division, the most populous of the NSP's nine national divisions.

Hamlin, 58, knows a thing or two about ski patrols. Like Bruce Wayne without the millionaire-playboy thing, he lives two lives. Since 1982, Hamlin has been a civil engineer with Donald L. Hamlin Consulting Engineers, a company his father founded in 1965; since 2006, he's been the company's president. But the junior Hamlin has been skiing "ever since I can remember," he says, and always in the company of patrollers — including his mother and father.

Hamlin has been a patroller himself since 1973, chiefly at Smugglers' Notch. He's held just about every position possible in the NSP and is currently a certified patroller. Less than 1 percent of members attain that rank, he says.

Hamlin's Essex Junction office contains the expected computer, engineering manuals and framed blueprints. But along one wall is evidence of his other occupation: pairs of mounted wooden skis; an old folding rescue sled that supports framed mementoes of NSP history; and a display case with an assortment of rescue knives, on which every ski patroller relies. Hamlin may not be obsessed with skiing, but his passion clearly runs deep.

"Most of the people you find in the ski patrol are overachievers of some sort," he says, tacitly including himself in that description. On a typical day, Hamlin explains, patrollers arrive early in the morning to check all trails and mark any obstacles, reporting back to slope management about the mountain's general status. "The public doesn't load until we clear the mountain," he says.

Throughout the day, patrollers continue to cycle through the trails, keeping track of changing conditions and encouraging safe skiing. When the day ends, they sweep through again to make sure the trails are free of riders. An evening debriefing leads to prepping for the next day, and it begins all over again in the morning.

Before there were ski lifts, Hamlin explains, only the hardiest skiers could get down the mountain because they were the only ones who could get up the mountain. Today, he says, ski patrollers are important because technology has made it easier for less physically fit skiers to navigate challenging terrain. Protective ski gear can help, but patrollers have had to address an increasing number of injuries.

Ski patroller Greg Premo, 54, is a medical assistant in the field of sports medicine, so his vocation and avocation are closely related. Like Hamlin, Premo grew up skiing, but he took a 35-year, career-related break from the sport, resuming it in 2006. Premo returned with a vengeance, though, becoming an NSP member at Bolton Valley Resort in 2007.

Premo is also a second-year instructor of the Outdoor Emergency Care course that meets twice a week from August to November at Camels Hump Middle School. In it, he instructs prospective patrollers in the art and science of emergency medicine, per the guidelines of the NSP, under whose auspices the original curriculum was designed some 30 years ago.

Would-be patrollers have their work cut out for them: The current OEC manual tops 1,200 pages. Mastering such a course requires the kind of dedication likely to deter anyone who signs up just to get the fringe benefit of free, all-season skiing.

Lectures are part of the class meetings, because, as Premo says, "Ski patrollers have to have the academic background, the anatomy, the physiology." But the real education, he says, comes in the form of the many hands-on exercises the students undertake. They use authentic emergency equipment, such as ropes and backboards, to perform simulated mountainside rescues.

Such practical experience is invaluable, says Premo, in preparing patrollers for the inevitable emergencies they'll face. He recalls a nighttime accident in which a young man suffered a devastating spinal injury. "It's amazing how fast and efficiently we worked," Premo recalls. "When the adrenaline starts going, time slows down. We got him out of a ditch and onto a backboard probably within 10 to 15 minutes. Afterward, you start shaking: Holy crap — what happened?"

Just as important, Premo says, is training his students in how to interact with the loved ones of injured skiers — call it slopeside manner. "You have to be a good negotiator, a good people person," he says. "To calm people down in very stressful, even life-threatening situations, you really have to relate to people very quickly and very efficiently."

According to Hamlin, only about 7 percent of NSP staffers receive a salary. The rank and file do not. That's true even of people like Premo, who not only patrol but instruct the next generations of patrollers. Why do they do it?

"What motivates me is what motivates everybody," says Hamlin. "We get to do something we love to do — ski. We get to help people, which obviously is a great thing."

The original print version of this article was headlined "Slopeside Service"