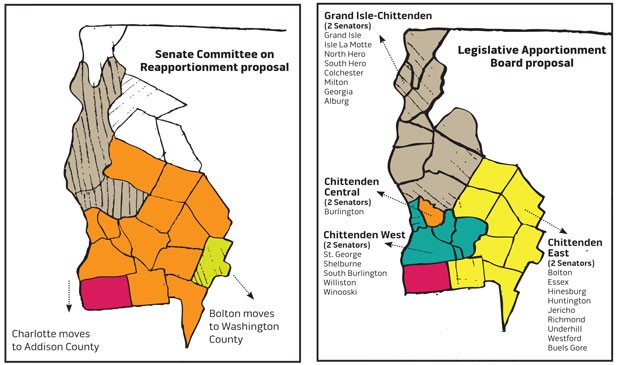 Every 10 years, as lawmakers consider how to redraw the boundaries of Vermont’s state senate districts, the same old question arises: What to do with the juggernaut that is Chittenden County?

Since it was created in 1836, the 30-member Vermont Senate has been divvied up, more or less, along county lines. But since 1965, when the U.S. Supreme Court ruled that state legislative districts had to closely reflect population, the decennial redistricting dance has grown more challenging.

The problem, according to former lawmaker Thomas Little: “Population doesn’t seem to pay a lot of attention to county lines.”

Nowhere in Vermont does that hold truer than in Chittenden County, which grew twice as fast as the rest of the state in the past decade. Home to a quarter of Vermont’s population, the region is represented by a six-member Senate district, the largest in the nation.

That could all change if Little, and his seven-member Legislative Apportionment Board, get their way.

“With six seats, you typically have six Republicans, six Democrats, and a number of other parties and independents running, so you can easily end up with a ballot of 15 or 20 people,” Little said. “I think that’s just a lot of information to try to sort through when you’re in a voting booth.”

Arguments abound against Chittenden County’s six-member district, which includes every town in the county except Colchester: Campaigns are more expensive; voters and senators are less likely to form relationships with one another; and population centers such as Burlington tend to wield outsize clout compared with the district’s rural reaches.

“When you look at this from the standpoint of what’s best for voters or residents, people tend to favor somewhat smaller legislative districts,” Little said.

Revolutionary as this scheme sounds, similar ones have been considered nearly every decade since 1972 — and every time, the legislature, which ultimately decides how to reapportion its own seats, has opted for the status quo.

Take Sen. Dick Sears (D-Bennington), for example. Although he acknowledged the Legislative Apportionment Board “did a lot of good work,” Sears says he favors “a system that would make as little change as possible.” Sears is a member of the Senate Committee on Reapportionment, which has ultimate jurisdiction over redistricting.

Sen. Jeanette White (D-Windham), who chairs that committee, had a similar assessment: “We’re not interested in making all those radical changes.”

White’s committee came up with an alternative plan, which will be the subject of public hearings starting next Wednesday, February 15. It proposes only a handful of changes to the existing map to account for shifts in population: moving Charlotte to the Addison County senate district, for example, and Bolton to the Washington County delegation.

Democrat-Progressive Sen. Tim Ashe — the sole Chittenden County member of the Senate committee — opposes excising Charlotte from his district. He cast the only vote against the plan and is working with other members of the delegation to present yet another proposal that would retain the town.

He argues the existing county structure prevents senators from adopting parochial points of view they might otherwise hold if they solely represented the city of Burlington or its suburban or rural neighbors. Though occasionally unwieldy, the size of the county’s delegation can be an asset to his constituents, he adds.

“Whether you live in Buels Gore or Burlington, you have six senators working on behalf of your interests, rather than just two, which would be the case under other scenarios, so I think it’s six one way and half a dozen the other,” said Ashe. “When I see the scale even, I think you should lean toward tradition.”

The courts have yet to specify how wide a gap is constitutional, though Little believes that “somewhat greater than 16 percent is probably constitutional.” In Ashe’s opinion, retaining Charlotte in the Chittenden County district is important enough to justify leaving voters slightly underrepresented — and is worth the risk of a lawsuit.

“My position is that I believe we can proceed above that 16.5 percent threshold and we can have the attorney general defend that in court,” Ashe said.

For Meg Brook, a former lawmaker who serves with Little on the Legislative Apportionment Board, the minimalist approach does not serve voters well. She is in favor of breaking up the Chittenden district.

“I really think what they’re doing both on the House side and on the Senate side is missing an opportunity to give every Vermonter an equal voice,” she said. “I understand they don’t want to disrupt things, but the whole point of the statutes is to give people an equal voice, and that seems to have been lost in this process.”

Brook, a Progressive, thinks she knows the reason the Senate committee ignored her panel’s consensus recommendation to split up the Chittenden district: Incumbent legislators are inclined to preserve the boundaries in which they have always won election. They tend to have higher name recognition and proven fundraising abilities, a huge advantage in such a large and expensive district.

“We’re human beings and nobody likes change,” Brook said. “The unknown of change is always fearful.”

Of perhaps even greater concern to incumbent senators is that the Legislative Apportionment Board plan would pit three of them against one another. Ashe and Democrats Philip Baruth and Hinda Miller would be forced to compete for just two seats in the new Burlington district. Ginny Lyons and Sally Fox, both Democrats, would run in the new Chittenden West district, which would include their hometowns of Williston and South Bulington, respectively. And Republican Diane Snelling of Hinesburg would be the only incumbent running in the new two-person Chittenden East district.

Baruth, a supporter of preserving the six-member district and retaining Charlotte within it, has yet another complaint: He sees the work of the Legislative Apportionment Board as a politically tainted product.

Though ostensibly independent, the board’s seven-person membership includes a representative chosen by each of the state’s three major parties. Then-governor Jim Douglas selected three additional members, one from each of the parties. Little, a Republican, was selected by the chief justice of the Vermont Supreme Court to chair the board.

In Baruth’s view, the Republicans and Progressives on the Legislative Apportionment Board worked together to carve up a map that would serve their own parties’ electoral interests.

“It was, to my mind, mostly a map that was mostly agreed to by non-Democrats, and so it never seemed to me to be a realistic map. It seemed to be, honestly, more political an approach than what we’re talking about now,” he said. “I actually see it as a more political construction that was not honestly meant to go the distance, but to make a statement.”

If what’s past is prologue, then no matter the motivations of the Legislative Apportionment Board, its radical redesign will likely go the way of similar plans drawn up and discarded in 1972 and 1982.