Six Years in the Making, Hannah Dennison’s 'The Quarry Project' Transports Viewers Through Time and Space

Award-winning Vermont choreographer, performer and educator Hannah Dennison normally creates a new work in one or two years. The time frame is shaped by collaborators' schedules, studio space rentals and other logistics. But nature and the pandemic conspired to dictate a six-year process, her longest ever, for her latest work, The Quarry Project. She considers the prolonged period a gift.

"It's never happened to me before," Dennison said, "that I have had what feels to me enough time to really work on and then burnish the piece so that I can feel finished."

Chelsea-based Dennison is the founding director of the nonprofit Cradle to Grave Arts. In 2020, she received two of Vermont's highest artistic honors: the Herb Lockwood Prize in the Arts and the Vermont Arts Council's Walter Cerf Medal for Outstanding Achievement in the Arts.

"There's no blueprint for what we're doing." Hannah Dennison tweet this

Dennison has been creating innovative, community-based, collaborative works for more than 35 years. She's produced unique, site-specific works at venues such as the Shelburne Farms Breeding Barn and the Kent Museum in Calais. The Quarry Project is perhaps her most ambitious piece to date.

Sited in the retired, flooded Wells Lamson Quarry in Websterville, it takes place on seven floating structures, six of which navigate the six square acres of water. In sold-out performances running from Friday, August 5, through Sunday, August 21, a cast of 17 dancers, five musicians and a narrator will invite audience members to sink into the present, enjoy their sensory experiences, and reflect on the nature of work, water, time and life. In early 2023, Dennison will invite the public to a film about the project; other films, photographs and documentation can be found now at thequarryproject2022.com.

"Everything is really slow to develop here [at the quarry]," Dennison remarked, "partly because moving through water is very slow."

At a July dress rehearsal, the 90-person audience sat on padded folding chairs on a floating platform secured at the quarry's edge across from granite walls scarred by blasts and spotted with tenacious plants. Middlesex-based Emily Boedecker, the project producer and narrator, offered some history of the quarry: It was operational from the 1700s through 1986 and is one of the country's oldest and deepest, at approximately 700 feet long, 400 feet wide and nearly 500 feet deep.

Boedecker then invited a suspension of left-brain thought. "Step with us ... into a world of magic and creating," she said, "this world of multiple and individual interpretations, a dreamscape, where there is nothing to understand and nothing to know ahead of time."

As Boedecker concluded her narration with Roger Keyes' poem "Hokusai Says," a single soprano's voice rang out, and a floating stage came into view from the far end of the quarry. On it stood dancers and musicians, shrouded in gray hooded coveralls that conjured images of quarry workers covered with dust. They were still but for momentary periods of touch — a hand on a shoulder, heads tilted together, hands held — perhaps in homage to the privilege of finally being together again after two years of pandemic separation.

Powered by a small electric motor, the stage slowly delivered its travelers to five other floating stages, positioned about 200 feet from the audience. Singers and instrumentalists gathered on one stage; dancers who had shed their coveralls for colorful clothing collected on the others. Each stage had one prop — a tiny house frame, chairs, a picnic table or a bed frame — "everyday items that viewers can understand and [that] may hold meaning for them," Boedecker said in an interview before the show.

In choreographed and improvised movement, dancers interacted with one another, their props, their stage and the quarry, sometimes standing so close to the water that they and their stage partially submerged.

Audience members had various interpretations after the show. Mike Fraysier of Barre found it "visually stunning" and somewhat mysterious. He has spent a lot of time hiking, skiing and biking at the top of the quarry, but this was his first time inside it. "It was neat to have this new perspective," he said.

Vermonter Brian Smith got a clear takeaway: "It was about life and the interpretation of life by an artist." To his eye, dancers wearing earth tones represented Mother Earth over the years, those around the picnic table evoked people having a good time in the Middle Ages, and those dancing with the house frame were modern. "It was kind of a synopsis of the human element and through time," he said.

Ten minutes after the dress rehearsal, Holly Greenleaf, a young woman from Huntington sitting with her feet in the water, said she was "still soaking in all the layers" of the performance. She appreciated the contrasts: Some movements conveyed "hardness and toughness, maybe reflecting trying to get things done and rushing around," she surmised. Interactions with the water offered "moments of relief, smoothness and slowness."

For Dennison, The Quarry Project is about many things, including loss. While doing background research, she solicited quarry stories from residents of Websterville and surrounding towns. They recounted tales of pride and accomplishment — but also of uncles who'd died working there, men pushed into the water by angry wives, and children who'd lost toys in the depths. With her project, she aimed not to erase painful memories but to provide a new, magical view of something old and familiar.

During the creation of The Quarry Project, Dennison has faced her own losses. David Severance, her partner in life and art for three decades, died of cancer in March. A man of many skills, including carpentry and music composition, he contributed significantly to her pieces.

Since his death, she said, the project has been "taking up all my airspace," so she has not had much time to process his departure. She looks forward to "being able to give it more time, more attention."

The project's six-year time frame has engendered other losses, too, such as those of dancers who left due to travel, work or other constraints. "One dancer became pregnant, had her child and has come back into the ensemble. It's been that long," Boedecker remarked.

The pandemic restrictions on rehearsing in person added another layer of loss. "It's been really hard for all of us who are movement artists, who have developed and are used to a level of comfort and importance in the proximity of another body," Dennison said. "That's a really big part of this art form.

"This prolonged time frame has insisted that I, as the director of this thing, really learn to gracefully cope with all the loss that I've experienced," she continued. 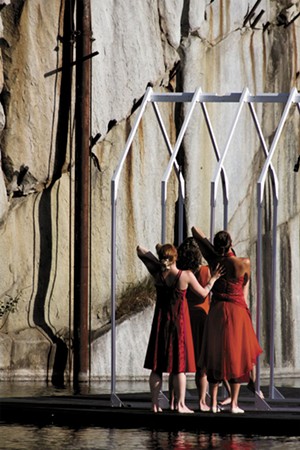 But Dennison is resourceful, determined and skilled at turning challenges into opportunities. She excels at gathering devoted creative collaborators and volunteers who achieve extraordinary things, like dancing on water.

"It's been necessary for us to have time, because we're figuring things out right to the last minute. There's no blueprint for what we're doing," she said.

Through the years, Huffman has directed numerous nuanced films about the project, and Barstow has captured its development in stunning photos. Anderson's costumes elegantly convey the somber realities of working in a quarry, then celebrate life's brilliance and diversity. LePage deftly managed multiple choreography changes as deepening relationships among the dancers impacted movement choices. Severance's music uses voice, accordion, flute and percussion in major and minor chords and dissonance to beautiful and haunting effect.

John was a junior in college when, as a summer 2019 intern, he helped Dennison build floating stages and devise a way to secure them in the water.

"The fact that the quarry is so incredibly deep is a challenge," John explained. "You can't anchor anything to the bottom, and the walls are vertical slabs of granite."

He used satellite imagery to select the best spot for a steel cable spanning the two sides of one end of the quarry. Then he drilled into the granite and installed wedge bolts, to which he fastened the cable. The wooden stages float by virtue of thousands of repurposed five-gallon food buckets, and performers control their locations with the cable.

The majority of funding for The Quarry Project came from approximately 150 individual donors, Boedecker said. Anderson painted all of their names on the exterior of the project's storage shed, lovingly titled the "Great Wall of Thanks." Grants have come from the National Endowment for the Arts, the Vermont Arts Council, the Vermont Community Foundation, the James E Robison Foundation, the Larsen Fund and the Amy E. Tarrant Foundation. In addition, Dennison said, Patrick Perus, president of Polycor, which owns the Wells Lamson Quarry, has been supportive throughout.

Besides seeing the 2023 film, those curious about the project may purchase books featuring behind-the-scenes photos and quotations from the artists involved.

After the final performance, Dennison will hold a sale to disburse all of the materials. She wants everything repurposed, from two-by-fours to buckets to sheets of plywood. "You need some five-gallon buckets?" she asked, laughing. "They're really handy and come with lids, handles and a history."

The original print version of this article was headlined "Ripple Effect"