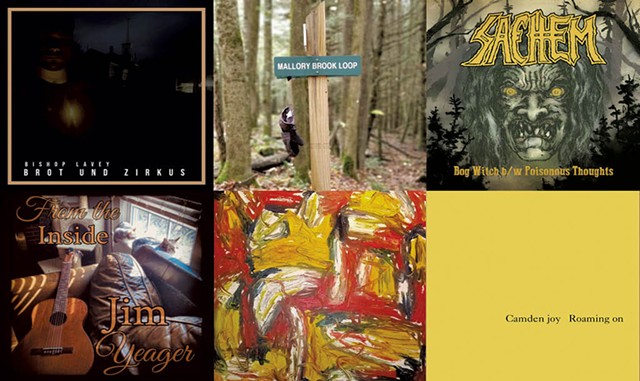 Every now and then, the music editor's desk gets a little too cluttered with new submissions, and Chris starts acting irrationally and lashing out at houseplants. To alleviate such outbursts, he takes a deep dive and reviews six releases from local musicians — even though he writes for a paper called Seven Days and it would make so much more sense to do seven reviews. You're getting six, all right? Don't ask; he just likes the number six.

It's last call for Bishop LaVey, the doom-folk alter ego of Montpelier musician Kane Sweeney. The singer-songwriter, who also fronts death-metal act OrphanWar, felt it was time to wrap up the Bishop LaVey project, as he had run out of folk songs to write about "Armageddon and alcoholism." For his final folk coda, Sweeney doles out tough love, like a lush leaving the bar and needing to make just one more point before staggering home. Musically, a hard-rock edge is always on the periphery of Brot Und Zirkus, as if his more aggressive tendencies were starting to break through. Front and center is Sweeney's gravelly baritone voice, booming out and snarling as he has his final say.

Key Track: "The World Don't Hate You" Why: Sweeney growls out some self-reflection: "The world don't hate you / It don't give a shit about you / You do that just fine on your own." Where: bishoplavey.bandcamp.com

As the sound of a babbling brook laps by, a drone drifts in and intensifies, like a plane overhead, growing ever closer. Thus begins Found at Mallory Brook (HT68), the latest release from experimental artist nd dentico — aka East Montpelier's Nick Dentico — founder of the DIY cassette label Histamine Tapes. The label — which focuses on drone music and, according to its website, avoids "sounds that make you want to dance" — issues cassettes made from recycled, dubbed-over old tapes and J-cards created from cultural ephemera such as maps and technical manuals. It's a fascinating series, one continued ably by Dentico himself, who crafts soundscapes that are in turns relaxing and slightly ominous. Nature and technology seem poised on the edge of a clash throughout the two long tracks on Found at Mallory Brook. Both feature a hydrophone recording of the titular brook, juxtaposed with Dentico's electric bass.

Key Track: "At Mallory Brook" Why: Dentico lets his movements and foot shuffles come through as he captures the sound of running water, giving the song strange bursts of static that work almost like percussion. Where: histaminetapes.bandcamp.com

I once had a bandmate who claimed he could get too stoned for stoner metal. I asked him to prove it, and when he couldn't, I kicked his ass out of the band. OK, he actually just moved to Texas and we parted amicably. But I rib him about his claim to this day and often send him stoner-metal albums and ask him to get as high as possible, just to see. For the record, he couldn't smoke himself out of digging Sachem's most recent release, a double single release of "Bog Witch" and "Poisonous Thoughts." That shouldn't be surprising, as the Burlington metal act has refined its sound to be as thick as the biggest bong hit. Down-tuned guitars, heavy as a mudslide, trudge alongside pounding drums and screamed lyrics courtesy of front person/guitarist Andrew Glynn. (He also fronts power-violence act Void Bringer and founded Second Republic Records.) This EP is a stomp to the face, full of slowly building doom and crashing thunder.

Key Track: "Bog Witch" Why: The more atmospheric of the two tracks, "Bog Witch" builds with such ominous power that you can all but feel the evil approaching. Where: sachem802.bandcamp.com

Jim Yeager, From the Inside

Windsor singer-songwriter Jim Yeager's latest record is a delicate acoustic affair. On previous records, such as 2020's Identity Crisis, Yeager's sound was rock-oriented, featuring a full band and a cameo from Jackson Browne guitarist Val McCallum. On From the Inside, however, Yeager taps in to his folk side, composing tender songs that, as he writes in the album's liner notes, were inspired by "those I love the deepest and by current events that have greatly affected me." The shift from rock to folk seems effortless for the formerly Florida-based musician, who shows some impressive chops on the acoustic guitar, as well as layering percussion with a pill bottle on "Deliberate Attack." It's a well-produced affair, too, thanks to Chris Decato's mixing and mastering. Whether or not Yeager brings back the full band on his next release, he's shown that his music can be just as affecting when it's stripped-down.

Key Track: "From the Outside" Why: Yeager softens his vocal delivery and harmonizes with himself to great effect on the chorus. Where: jimyeager.bandcamp.com

The first track on RASH, the latest release from Revolution Robots, is titled "My Deepest Apologies." Perhaps Vermont-based artist Matthew Chaney knew how abrasive the track's three minutes of static noise would sound, particularly as the opening song. RASH never gets more listenable over the course of the six tracks, but I'm not sure that's really what Chaney is going for with his dissonant, twitchy songs full of horny robot voices. Many of the songs are more akin to endurance challenges, such as the truly painful-to-listen-to "Dentist." Revolution Robots seem to have an almost anthropological side, as if Chaney is trying to create music that sounds like artificial intelligence songs written for other robots.

Key Track: "Gentle Country Robot" Why: The robot is trying to break your heart with a song about a sad-sack robot who falls in love with a Waffle House cash register. Where: revolutionrobots.bandcamp.com

Camden Joy is the pseudonym of Middlebury-based author Tom Adelman. Perhaps best known for his books, such as The Last Rock Star Book: Or: Liz Phair, a Rant, and Boy Island, Adelman also gained notoriety in New York City in the mid-'90s by slapping posters across the city, full of guerrilla-style music criticism. His abilities as a writer shine through on Roaming On, one of two records he released in March. A quirky and at times inventive songwriter, Adelman delves into songs that double as short stories. They reflect life at its strangest and often feature himself as a bemused, occasionally reflective character. Shades of Elvis Costello and the Silver Jews' David Berman color Adelman's offbeat songs. He also uses field recording in evocative ways, adding natural sounds that augment his songs. The result is a record that plays out like a jumbled slice-of-life document, full of surprise and charm.

Key Track: "Make Me a Coin" Why: Adelman sings my favorite line of the year: "Don't ever put my face on U.S. currency / That spot's reserved for hypocrites and thieves / Make me a coin that says, 'Death awaits thee!'" Where: camdenjoy.bandcamp.com

Correction, May 10, 2022: An earlier version of this story misidentified the lead singer of Sachem. It is Andrew Glynn.