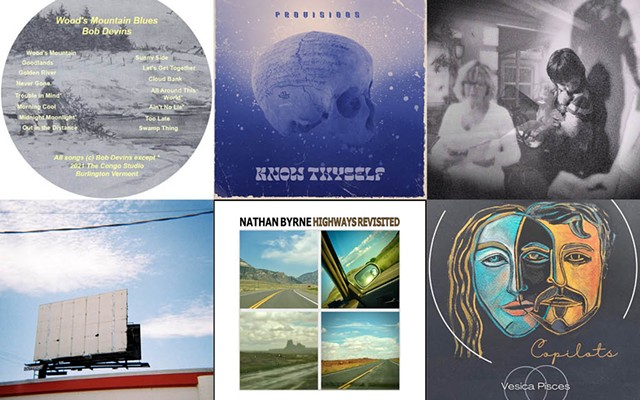 Sometimes your friendly neighborhood music editor needs more than two spots to review the latest album submissions. Sometimes he's just listened to so much local music that he needs to blab about all of it to someone, or he'll start writing about himself in third person. (Wait. Did he just do that? Damn it.)

A genre no one talks about is DIY shack folk. Why is that? Oh, right — I just made it up. Yet I'm absolutely positive shack folk exists, because that's what Burlington's Bob Devins plays. You know those old, dilapidated shacks you see in the woods sometimes, the ones that have nearly become part of the landscape? Imagine you hear someone inside one of those lichen-covered ruins playing sparse folk music. That's the sound of Wood's Mountain Blues.

Devins' fourth full-length album has a more skeletal feel than his earlier work, which the singer-songwriter and multi-instrumentalist often elaborately arranged. In part because he made the new record during quarantine in 2020, Devins simplified his production, recording his acoustic guitar and vocal takes to a click track in one take for each song. The result is a raw but intriguing album.

Provisions isn't really a band. It's a label/recording project Garrett Heaney has been working on for years, in which he curates some of his favorite beats by underground producers and combines them with the verses of an assortment of rappers. From Chicago MC Defcee and Kool A.D. of the late, great Brooklyn hip-hop group Das Racist to local talent such as Subtext, Heaney brings together a huge collection (21 tracks!) of talent on Know Thyself.

Full of vibrant and gorgeous-sounding songs, Know Thyself is something of an experiment, a financial outlier from Heaney. The former publisher of online journal Wishtank, Heaney went for quality with his investment, paying the producers for their beats and the rappers for their verses — something that is rare in the music business. He also brought in Zach Crawford, aka SkySplitterInk, to produce the album. What Heaney didn't do was put his record on any of the big streaming services, instead making it only available on his own site.

Key Track: "Hard Boiled" Why: West Coast rapper A-F-R-O spits over producer 8-bza's beats in the best pairing on the record. Where: provisionshiphop.com

Tyler wrote about the themes that inspired the record on Peasant Farm's Bandcamp page, calling the album "a look back at weathering the practices used to indoctrinate children into the Jehovah's Witnesses organization." The listener will have to infer much of the meaning, as the record is entirely instrumental and leans toward power electronics and dissonance. It's not easy listening by any stretch, but one gets the impression that that's exactly how Tyler intended Always Rebuilding.

Key Track: "Apprehensive Confirmation" Why: The track manages to out-harsh the other tracks, a notable feat. Where: blackringrituals.com

Jillian Comeau and Kim Carson used to play together in Canadian queer punk rockers Like a Motorcycle. After Comeau left the band in 2016, she relocated to Burlington, but Carson remained in Halifax, Nova Scotia. The pandemic put their other projects on hold, so the two old friends collaborated on a long-distance record.

Enter We Should've Been Plumbers. The band's sound hews closer to later-period Sleater-Kinney than the frenetic punk of Like a Motorcycle. Slowing down a little allows a different sort of heaviness to creep into the duo's songs. The record has a powerful heft, particularly in the juxtaposition of Comeau's snarling guitars and the vocal harmonies she layers atop Carson's melodies. The physical distance between the two songwriters makes their chemistry on the album that much more impressive.

Key Track: "Red Lights" Why: The band rocks out an anthem to perseverance: "They couldn't keep me cornered if they wanted to," Carson sings defiantly. Where: weshouldvebeenplumbers.bandcamp.com

Waterbury singer-songwriter Nathan Byrne has been making earnest, straightforward folk rock since releasing a 2013 demo to family and friends called Highway of Life. Nine years later, Byrne returns to those early songs, reinterpreting and augmenting his old stuff. In an email to Seven Days, he wrote that adding tracks to his old mixes was like "playing music with a younger version of myself."

Byrne's musical time traveling yields a record full of heart-on-sleeve roots songs, with shades of '90s alt-rock sprinkled throughout. There's no hint of a demo feel to Highways Revisited, as Byrne pulls double duty, engineering and producing it. The sound is full and far slicker than that of most albums made in home studios. Maybe Byrne should check that back catalog of his more often.

Key Track: "Peace of Mind" Why: Byrne's soulful vocals are almost as searing as the guitar solo. Where: reelbyrnemedia.com

For those of you, like me, who sucked at geometry, the vesica piscis is a mathematical shape formed at the intersection of two disks with the same radius. Though the figure also has ancient roots in early Christian traditions, it's the geometrical aspect of the term that fits Burlington's jazz fusion outfit Copilots and their nine-song debut record, Vesica Pisces.

The duo of Damian Roy (Shane Murley Band) on drums and Naomi Galimidi (Gneiss) on keys and vocals, Copilots combined compositions and improvisational jams to write their record, not allowing themselves any overdubs. It's essentially a live album, something Galimidi said she and Roy strived toward. "In a time when most music and art is highly produced, polished, and commercialized," wrote Galimidi to Seven Days, "we want to create a community that values process over polish, authenticity over perfection, and vulnerability over studio magic." For a warts-and-all effort, Vesica Pisces is an impressively tight debut.

Key Track: "Keep It Loose" Why: Galimidi sings of resisting conformity over a funky synth groove. Where: Spotify, Tidal and YouTube Music