Sit and Stay at the Quirky Pet 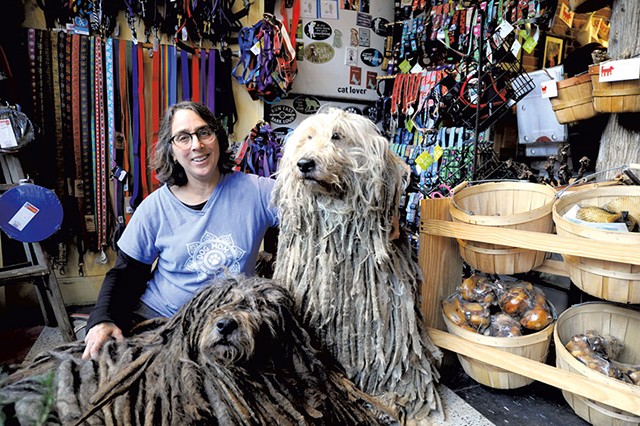 Drop by the Quirky Pet in Montpelier, and you'll encounter greeters unlike any at Walmart. Meeting you at the door are Aria, Anuzzo and Cuba — the Bergamasco sheepdogs whose dreadlocks and affectionate dispositions have made them downtown celebrities. Past these benign sentries lies the tiny emporium that for four years has provided animal lovers with a broad range of products, as well as with community.

Owner Cindra Conison says it all started with a trip to Maine, where she and her husband, Richard Sheir, were taking their son for summer camp. On the way home, the two stopped at a shop selling supplies for pet birds. Back in the car, Conison, who was then working as a substance-abuse counselor, found herself thinking about opening a bird store of her own. Sheir jumped on board. But on the ride home, the concept evolved into a shop focused on dogs and cats.

Next came the work. "I spent two years on spreadsheets," Conison says, describing how she defined the unique product mix of what would become the Quirky Pet. One reason for the long lead time was a commitment that she made early on: to carry only products made in the United States.

Getting American-made goods meant reaching out to scores of small domestic producers. Conison became a master of the Google search, a voracious reader of online reviews and a frequent visitor to pet stores, where she would suss out products in person. The effort was worth it, she says, because of the huge difference in quality between domestic products and those manufactured overseas.

"For example, if you compare the treats we sell to ones in the big-box stores, you'll see that ours have no fillers. They are all human grade," Conison says. Does that mean a person could snack on them, too? Yes, she says, and acknowledges that she occasionally does. 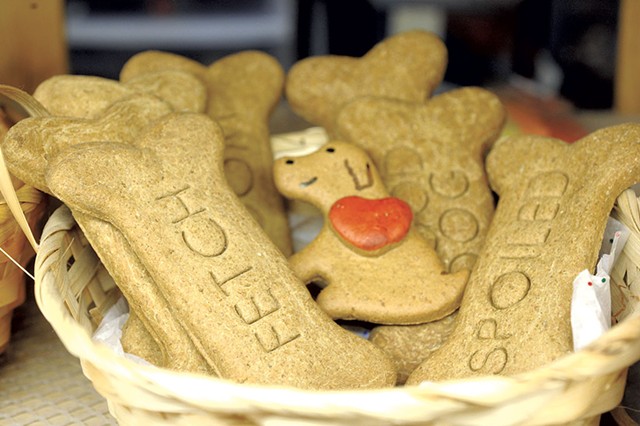 The decision to focus on American-made quality has paid off. The Quirky Pet opened in July 2011 in a cozy 700-square-foot nook near the corner of State and Main streets. The store thrived from the beginning, Conison says. In addition to pet-loving locals, the Quirky attracts tourists, summer folks, leaf peepers and skiers, according to Conison. Many have become repeat customers. "They come back because what I have here you can't find every place," she says.

How does the tiny Quirky Pet compete against behemoths such as PetSmart? "I don't," Conison says. "I just try to become the best Quirky Pet I can be."

Apparently, that means carrying an astounding array of products, from the ordinary to the exotic. For instance, Naughty and Nice treats from the Preppy Puppy Bakery for a pup's Christmas stocking. Disposable dog booties in a rainbow of colors. Grain- and gluten-free turducken nibbles. Smoked pig ears and tracheas. The shop offers dog toys by the dozen, high-visibility gear for dark nights and hunting season — and, for humans, T-shirts, car stickers and socks boasting breed-specific logos.

The physical and emotional warmth of the shop contribute to the appeal. Conison, a visual artist, designed the store with a homey, rural aesthetic, incorporating decorative architectural elements such as wooden beams salvaged from an old barn. Natural tree trunks and branches provide convenient product hangers. One wall is covered in barn wood; another is stripped to its natural brick.

The Quirky Pet mimics the look and feel of a general store. That association, Conison says, comes naturally. When she was growing up, her father ran a grocery store in Columbus, Ohio. In addition to stocking shelves and handling a cash register, Conison learned how a retail business can serve as a social hub. At the Quirky, she's attracted a community of customers who consider their pets full-fledged family members.

While Conison talks with Seven Days, local resident Ted Smith drops by with his labradoodle, Kelsey. Their visit is typical of ones by the shop's clientele, who come not just to shop but also to hang out. Smith shoots the breeze with Conison and Sheir while Kelsey plays with doggie buds Aria and Anuzzo. After a few minutes, Kelsey gives Conison a friendly nudge, knowing she's a soft touch for treats.

Some customer visits are more pragmatic than social, of course; Conison says she's always happy to help pet owners solve problems with their critters. In good times or bad, that's the community vibe that defines the Quirky Pet. "It says it on the sign: We're the epicenter of pet culture," notes Sheir. "And we really are."