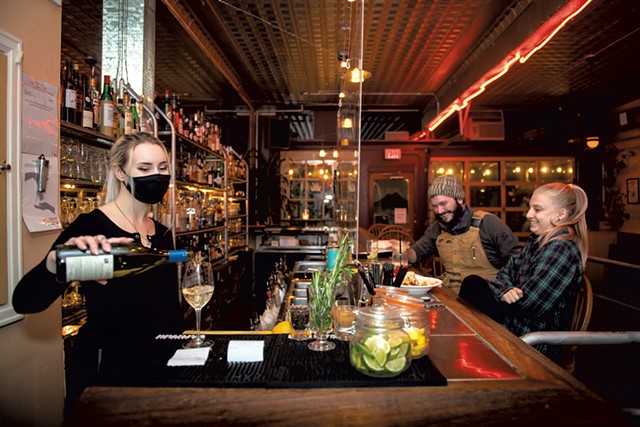 The year 2020 has not been good for barflies. In fact, the leisurely activity of hanging out at a bar, the subject of this occasional series, was prohibited for six months in Vermont.

Even after restaurants and bars gradually reopened to on-site customers at reduced capacity starting on May 22, bar seating was not permitted until mid-September.

That meant no perching elbow to elbow, nursing a glass of wine and falling into impromptu chats with strangers. No solo meals enlivened by snippets of neighboring conversations and internal analysis of whether the pair two stools over would make it to a second date. No front-row seats so close that one could almost feel the chill and smell the freshly zested citrus as the bartender expertly double-fisted ice-filled shakers and garnished cocktails with a flourish.

Those pastimes returned on September 18, when Gov. Phil Scott reopened bar counters with safety guidelines in addition to those that already applied to restaurants and bars.

Patrons can now sit at a bar separated from other customers by six feet and from the bartender by a plexiglass divider. All customers in a bar area must be seated, and those at tables cannot approach the bar to place their own drink orders. Reservations or call-ahead seating are theoretically required even for bar seats, though the priority is obtaining each patron's name and phone number in case the Vermont Department of Health needs to do contact tracing.

News flash: Being a barfly isn't quite what it used to be.

Early on a recent Thursday evening, I had the bar all to myself at the Daily Planet in downtown Burlington until the host seated a man and woman at the other end. Luckily, I was still close enough to eavesdrop.

"Thank you so much for offering us this experience," I heard the woman say fervently to the bartender.

At that point, I had spent about 30 minutes at the bar, starting with a maple-cinnamon whiskey sour ($11) topped with egg white froth and a delicate dusting of cinnamon. The drink, which was more tart than sweet and very much to my taste, complemented the richness of my Tongue-in-Cheek sandwich ($14) of, yes, braised beef tongue and cheek layered with pickled onion and a housemade tarragon-Dijon-mayonnaise blend.

I couldn't decide between fries and greens, so I paid $4 extra to get both and had plenty of room for two plates in my spacious private section of the bar. (The Planet's bar area also includes tables, though they are now fewer and spaced out.)

The bartender, Kristen Murray, slipped my orders under the plexiglass dividers stretching the length of the bar. Shelves of bottles and glassware sparkled behind them. Everything was tinted pink by the red neon squiggle throwing light down from the ceiling.

Murray wore a face covering, of course, as did I until my drink and food arrived. Despite the many barriers between us, we managed to converse about how customers were behaving (largely respectfully), snowboarding (Murray's preferred winter sport) and how many people have first dates at the Daily Planet (including a friend of mine who was meeting someone there that very evening).

A few days later, I chatted with Murray, 24, about how it feels to bartend these days. Her job at the Planet, as the 38-year-old restaurant is often called, started less than a month before the pandemic shuttered all on-site service at Vermont restaurants and bars.

"It has brought a sense of normalcy to have people sitting at the bar again." Kristen Murray tweet this

The Planet reopened on July 2 for on-site dining and takeout. "There's been a lot of adapting," Murray said. "It's been difficult, but I feel lucky to be in Vermont. I don't know that I would feel safe if I lived in another part of the country."

In the month since the ban on bar seating was lifted, Murray said, she's seen people excited to come back. "It has brought a sense of normalcy to have people sitting at the bar again," she observed.

She noted that some patrons need to be told they can't just walk in and sit anywhere at the bar as they once did. But bartenders are accustomed to telling people things they might not want to hear. "We can't overserve. We have to card," Murray said. "You have to be able to tell people no sometimes."

Overall, hosting even a few customers back at the bar has felt good to Murray. "We were bartending all summer with just an empty bar," she said about making drinks for customers seated at indoor and outdoor tables.

"Being a bartender is like being on a stage. I really missed people," Murray said. Though, she added with a laugh, "It was a little bit of an adjustment to go back to having people right there."

The bar area and late-night bar and food business have long been major contributors to the Planet's revenue mix, chef and co-owner Neil Solis said. He bought the landmark restaurant with his wife and other partners at the end of January.

"I want that bar business back, but I don't see the demand yet," Solis acknowledged.

Pandemic or not, the chef himself has never been a fan of sitting at a crowded bar. "A bar is strangers sitting next to each other," he said. "I prefer a table, personally."

For patrons and bar owners alike, the easing of restrictions has brought tough decisions. Some owners have decided that reopening the bar isn't worth it.

At Three Needs Taproom & Pizza Cube, another longtime Burlington bar destination that stands a few blocks from the Planet, owner Glenn Walter had big plans to celebrate the bar's 25th anniversary on November 17. But the pandemic may have put that party on indefinite hold.

Three Needs has been closed since March 16, except for a brief reopening in June for takeout drinks and pizza. While Walter said he may open for one night to commemorate the anniversary, after that, he expects to stay closed until April.

Three Needs, which Walter moved from its original College Street location to Pearl Street in 2012, is known for its laid-back vibe, pool tables, solid beer list and $1 weekday draft happy hour. That atmosphere isn't easy to reconcile with the state's guidelines. Walter believes the restrictions make sense to help reduce transmission of the virus, he said, but they make opening his business untenable.

Even when the decision to allow bar seating with limitations arrived in September, Walter didn't consider reopening. "Let's try it again when we can really do it," he said. "Bars are fun. You go out to have fun. You dance. You hug people. We don't want to be the fun police."

The bar owner said he is fortunate to have a stable, well-established business. He owns the building and has a good relationship with the bank that holds the mortgage. Walter said he has benefited from federal and state loan and grant programs and took the initial hiatus as an opportunity to redo the floors, repaint and reupholster furniture.

Discussing his decision to keep Three Needs closed, Walter was careful to note that each business owner is dealing with different pressures specific to their establishment and situation. "These are very difficult decisions," he said. "I don't know if this is the right decision, but better safe than sorry."

Unlike Walter, Solis and his partners at the Planet have not been able to get much economic assistance, he said, because the business lacks financial history under their ownership.

The restaurant has been fairly busy since reopening, Solis said. But capacity limits have combined with changes in consumer behavior to cut into business, particularly on the bar side.

The Planet's bar used to be a favorite destination for restaurant industry employees winding down after work, Solis said. These days, "That crowd's just not out."

When late-night customers do come by the bar for a drink and bite to eat, Solis said, they are extra appreciative, given how limited their current options are. He's working on ways to serve food even after his kitchen shuts down for the night.

"I'm looking at offering something like a staff meal," Solis said, referring to the family-style meal that many restaurants provide to employees before they open. An example might be shepherd's pie with meat and vegetarian options, he said. The meals will be affordable, probably less than $10, and require minimal work to prep and serve.

Solis is doing everything he can to keep the Planet turning while making it as safe as possible for customers and staff. He understands the tension between people's desire to go out and their ongoing anxiety about the pandemic.