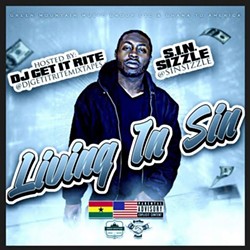 Over the past decade, one of Vermont's most consistent rap talents has been Ghana-born, Bronx-raised S.I.N.siZZle, also known around Burlington as Edwin Owusu. For years, he's been a standout collaborator and an engaging stage presence. But 2015 saw him step up as a prolific show promoter through his company Green Mountain Music Group.

Owusu clearly has even bigger ambitions for this year, which he kicked off by releasing his debut mixtape, Living in Sin. It's everything rap fans have grown to expect from a mixtape: the inconsistent sound quality from track to track, the constant gun sound effects and air-horn attacks between songs, and, perhaps most of all, the fact that you've got to visit online distributor DatPiff to download it. Format constraints aside, though, it's also a million miles away from the "warm leftovers" feel of most mixtapes.

The title is no mere pun. Although the project is not sonically cohesive, the entire 18-track playlist is thematically on point, a portrait of an imperfect man who is keenly aware of both his flaws and his gifts.

As a songwriter, S.I.N.siZZle demonstrates so much range here it almost becomes a handicap. At the very least, it's strange to have club anthems about seducing strippers in the same mix as "Dear Joey," a heartfelt and remarkably articulated song for his firstborn son. You'll have contradictions like that when you're dealing with actual artists, though, and this one has a real knack for narratives.

Naturally, the story we're best qualified to tell is our own, and the autobiographical tracks are where this project really takes off. Indeed, two of the best are the cautionary, claustrophobic "Vermont Trap" and the aspirational gospel "Ghana to America." Both are blunt but earnestly hopeful takes on the African diaspora experience.

Mixtapes are a business card, an introduction to new fans, but they also serve a message to the competition. The diversity of styles on display here is a statement about Owusu's always-adaptable skills on the mic. On tracks such as "Instant Classic," S.I.N.siZZle is making an unambiguous bid to be the best rapper in the state, period.

It's followed up immediately by the posse cut "Quiet Storm," which features some of the other contenders: Jibba the Gent, an impressively hardworking hip-hop entrepreneur in Springfield; Patron Pone, the most charismatic thug rapper Vermont has ever seen; and battle champ Learic of the Aztext. When siZZle opts to go last ... well, that's making a statement, too.

It's a credit to the artist that the mixtape has more quality songs than space permits me to unpack. Loaded with carefully constructed rhymes and hard-won life advice, Living in Sin is a power move. It kicks off what should be a strong year for local hip-hop and trains a well-deserved spotlight onto one of Burlington's best.

Living in Sin by S.I.N.siZZle is available for download at datpiff.com.