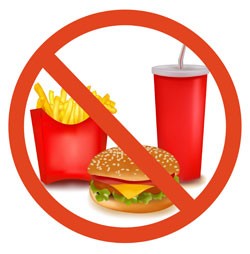 At our house the holiday season begins with the latke bash. The table is laid as commanded in the Torah: Thou shalt surfeit thine appetite with potatoes and oil and fall down beneath the serving board in the drinking of wine.

We serve a few leaves of lettuce, too, to cut the fat and guilt.

Food, fat and guilt are not just personal matters anymore. They are the subjects of hot politics as policy makers take aim at American obesity.

At one end of the debate is the literal carrot. The Child Nutrition Act, reauthorized by the president this month, includes increased reimbursements to schools so they can serve more fresh fruits and veggies. In recent years, the USDA also has made it easier to use food-subsidy vouchers at farmers markets.

At the other end are the sticks: restrictions and taxes on junk food, many of which would reduce people’s weight by extracting coins from their pockets.

So far, most of these negative incentives have failed to materialize. Campaigns to tax soda in Mississippi, New Mexico, Washington, Philadelphia and D.C. faltered, as did a congressional proposal to use such a levy to finance health care reform. Minnesota tried to limit junk-food purchases with food stamps and was rejected by the USDA. And the soda tax just lost a strong proponent in Save the Children, which seems to have dropped out in return for a $5 million grant from PepsiCo. Oddly, that funding will help finance the organization’s work against childhood obesity.

But the idea keeps rising from the dead. In October, New York Mayor Mike Bloomberg asked for a waiver from the feds to prohibit the use of food stamps to buy sugared beverages in his city. The next month, Vermont Attorney General Bill Sorrell floated a soda tax, which both Gov.-elect Shumlin and House Speaker Shap Smith have rejected.

Aside from food-industry arguments — that any tax on anything will destroy the U.S. economy, and sugar water is as wholesome as mother’s milk — there’s a solid, pragmatic case against sin taxes. Whether levied on food or cigarettes, they are bad fiscal policy. The reason: They serve two masters, health and revenue. And, as Luke said, you cannot serve both God and money.

If the tax succeeds in diminishing the targeted behavior, you lose the tax revenue. If you’re collecting a steady stream of revenue, you’re obviously failing to change behavior. For example, many states have used tobacco taxes to fund health care, education and other public services. But smoking bans and aggressive public-education campaigns — and maybe taxes — have persuaded thousands to put down their cigarettes. When smokers get well, the state budget gets emphysema — which weakens the public will to help more people quit smoking.

Public policy is rarely just rational, however. It is emotional and ideological. A tax on “bad” foods is also a tax on badness. Such a tax is intended not only to slow the consumption of Big Macs and Pepsi, and thus reduce heart disease or diabetes. It’s more than a friendly public palate educator, encouraging consumers to forgo the orange pop and try the delicious unsweetened orange juice. The tax is more than a means of reimbursing society for unhealthy eaters’ medical bills.

A junk-food tax punishes people for having the wrong tastes. In practice, it punishes them for being poor.

Sure, poor people eat shitty food. Good food costs more. When food activist Joel Berg tried to live on food stamps in 2007, he could afford an apple a day, but not an organic one. In 2010, he couldn’t afford an apple. Good food is hard to come by. I defy you to find kale at a supermarket in a low-income neighborhood.

But the middle class eats junk, too; it’s just fancier junk. In the last week I have ingested enough butter and sugar to supply Liechtenstein’s national bakers’ guild for half a year. I’ve downed French limonade from a glass bottle with a wired toggle cork, quarts of eggnog, malbec and martinis. Should there be a tax on gourmet butter cookies? Was Sorrell intending to place a surcharge on the Reed’s Original Ginger Brew I buy at the food co-op, or on Izze, a “fortified sparkling juice” that comes in slender cans and chic flavors such as blackberry and grapefruit? These “healthy” sodas deliver approximately the same calories as Coke and, according to nutritionist and food activist Marion Nestle, as little honest nutrition. Izze also costs twice as much as Coke.

Most health activists support junk-food taxes alongside food-industry regulations to wrench America from its lethal diet. But many other antipoverty and antihunger advocates oppose the levies because, like all sales taxes, they are regressive, taking a bigger bite out of a low-income budget than a wealthier person’s. Opponents also argue that food is a pleasure, and the poor deserve pleasure as much as anyone else. If you can’t afford caviar, at least you can enjoy chips.

Taxation is for raising money, a necessary government function. Taxes should not be deployed to punish or reward.

So, keep the junk off the market. Pour on the industry regulation. End the corn subsidies that siphon high-fructose corn syrup into virtually every U.S.-made processed food and thence into the bloodstreams of American eaters. Support organic farms. Require schools to serve lentils and whole-grain bread, broccoli and watermelon.

But keep personal sanctions off the plate, because anti-sin measures — censorship, prohibition, junk-food taxes — are little more than moral symbols, and those symbols serve their creators. Targeting the sins of others allows the public to project its own gluttony or lust onto the images of obese welfare mothers and boozers, among others — and symbolically expiate its own guilt.

I put down my fork, wipe the grease from my face and extend this caution: Let she who is without sin levy the first sin tax.