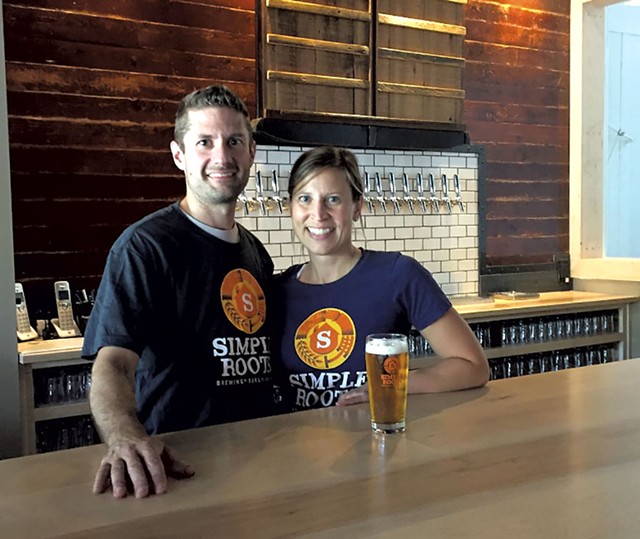 Dan Ukolowicz and Kara Pawlusiak have been brewing and bottling beer in the couple's New North End garage since 2014. As Simple Roots Brewing, they sold their beers at farmers markets in Burlington and Winooski and stores in Chittenden County. Earlier this year, Simple Roots added three additional tanks to its three-barrel system to meet growing demand. And last Thursday, July 21, the pair opened an airy tasting room at 1127 North Avenue, Suite 8, in the Ethan Allen Shopping Center.

Right now, drafts include Simple Roots' light and easy Burlington Common lager, the frothy and crisp American Dream cream ale, Ukolowicz's popular Elderflower saison and gose, and three hop-driven pale ales. They're all available in pints and flights for on-site sipping, and in large and small growlers to go. Folks seeking bottled versions can find them two doors down at 802 Beverage Wine Spirits.

Pawlusiak says she's still working out the food program — right now, it includes pretzels and other dry snacks. In the coming months, she hopes to offer themed menus such as taco nights and pierogi nights. "Dan and I are both Polish," Pawlusiak says, and grew up making handmade potato dumplings. "So the pierogi thing will happen regardless."

Pawlusiak hopes that the new taproom, which seats nearly 60 people, will become a local gathering place. At last week's opening, "We had a lot of neighborhood people who could walk and bike here," she says. "Really, what we want to be is a neighborhood brewery. But we also want everyone who loves beer to come through."

The original print version of this article was headlined "Entrées"