Sign of the Times: Deaf Vermonters Seek Better Options for Services and Schooling 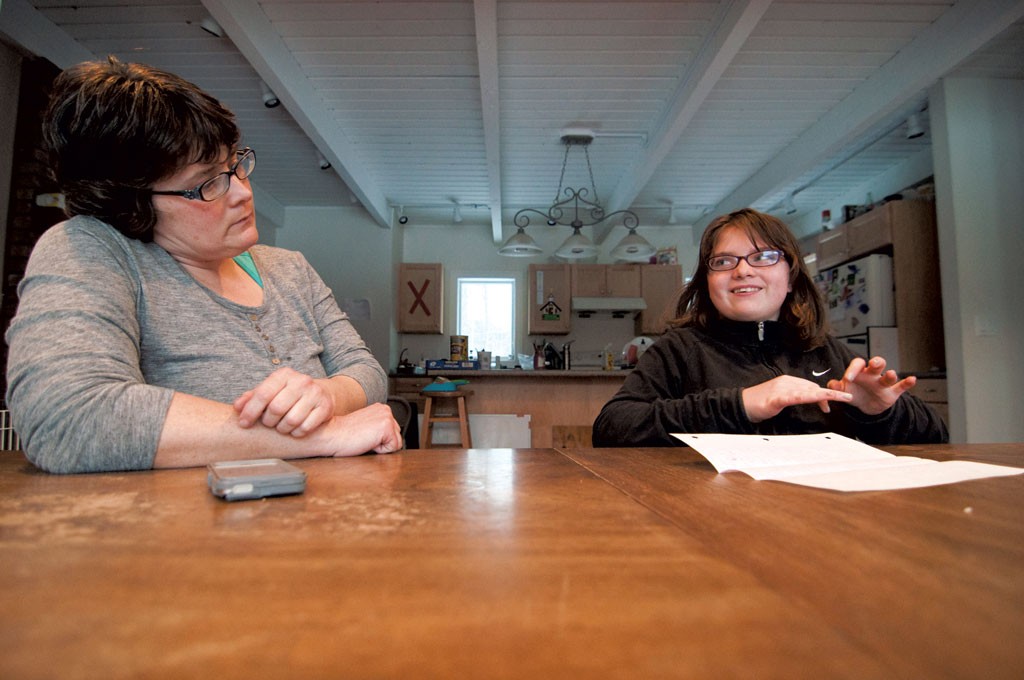 Neila Eaddy picked up a pen and started writing a letter to her pen pal, homework she needed to complete during school vacation. Hunched over, the 10-year-old quickly filled a page with pale-pink script. Her deep concentration broke only when her mother tapped on the dining table to get her attention. The two communicate using American Sign Language because both Neila and her mother are deaf.

Tammy Eaddy asked her daughter to tell a reporter what it had been like at Underhill Central School, which Neila attended from 2011 until early 2014.

"It was really hard to understand what was going on," Neila signed. Interpreter Eliza Goodhue translated the girl's fast-moving fingers into spoken English for a reporter. Neila had an interpreter with her in class, she recalled, but still, "If I was stuck with my homework, I would just go home and ask my mom for help."

Neila's mom pressed her to talk about what the mainstream elementary school was like for her socially. "It was hard to understand my friends," Neila replied.

"She was doing OK, but the possibility for social interaction was limited," Tammy Eaddy added. "She had a few people who would say 'hello' to her in class, but that is not social development. I wasn't happy with the situation."

Eaddy chose to homeschool her daughter last winter and spring, during which time she also pressured the school system for other options. Maybe Neila could have two interpreters, Tammy suggested, so someone could be with her at lunch and recess as well as during class.

The school district eventually agreed to pay for Neila to attend an out-of-state school for the deaf — one she had attended when her family lived in Connecticut.

Beverly White, special services director for Chittenden East Supervisory Union, said that decisions are tailored to the needs of individual children. "We always start in the school environment and try to meet the student's needs there," White said. For children with hearing loss, school officials work with consultants who might recommend the use of interpreters, amplification systems or other accommodations.

As the easternmost district in Chittenden County, CESU comprises nine schools from kindergarten to 12th grade, including the one Neila attended. Of the approximately 2,600 students that CESU serves, seven have hearing deficits, White said.

Cindy Moran, the state special education director, said that 2014 data tallied 298 deaf or hard-of-hearing children on individual education plans, and another 200 on 504 plans — another category of federally mandated services that ensures accommodations are provided even if special instruction is unnecessary.

But for some deaf students like Neila, services within mainstream schooling do not meet their needs. And if a student wants to attend a specialized school for the deaf, they must look outside Vermont. In 2014, 11 deaf children attended out-of-state schools, Moran said.

The only school for the deaf in Vermont, the Austine School, which Neila probably would have attended, closed last June. Founded in 1904, Austine was a private school in Brattleboro for students with hearing loss, but because enrollment had declined from 145 in the 1970s to just 25 during the 2013-2014 school year, the school had to close its doors.

Austine's closure impacted not just its students. Since 1998, the Vermont Center for the Deaf and Hard of Hearing had run the school and also provided an array of services to deaf individuals and families throughout the state. The school's funding crisis also affected the center, which closed in the fall. These losses have advocates and families saying it's time to reexamine services for the deaf in Vermont.

Since the beginning of September, every Sunday at dinnertime Neila has boarded a bus and traveled four hours south, along with six other Vermont children, to the American School for the Deaf in West Hartford, Conn. She returns home on Friday evenings to spend the weekend with her family.

Eaddy said she videophones with Neila, but sometimes her daughter is too busy with friends to have a conversation. "That bothers me a little," Eaddy admitted, but added that the benefits — including Neila's thriving social life — outweigh any separation anxiety. Eaddy plans to have Neila attend the American School through high school.

As a result of Neila's experience, Eaddy has become active with the Vermont Association of the Deaf to raise awareness about the educational and service gaps created when Austine and the VCDHH closed.

"We need a school where deaf kids can go and not feel so isolated," Eaddy said. "I feel the state of Vermont needs more awareness about deaf children in general. There is just not enough exposure to our culture, our language, who we are."

Several weeks ago, Eaddy and dozens of other deaf Vermonters brought their concerns to the Statehouse. They placed signs in snowbanks near the building's entrances and held a midday rally to call attention to two bills.

S.66 and H.140 propose that the legislature adopt a bill of rights for children who are deaf or hard of hearing. The bills say deaf children should have the right to early assessment, intervention and supportive family services — and to "educational placement decisions that give full regard to the child's individual communication and language needs."

The two bills would also establish a state commission for the deaf to identify service gaps and recommend how the state might restore or even expand education options for deaf children. The legislation guides the commission's feasibility study of a centralized school for deaf children located on a state college campus or the former Austine School property.

During the midday rally, which drew the attention of only a handful of legislators, Vermont Association of the Deaf president Mary Essex stood on a chair so the crowd in the Statehouse's Cedar Creek Room could see her signing. Essex, who is deaf, suggested that for many Vermonters, the deaf community is practically invisible. "Often, people don't meet or know people who are deaf," she said.

It's unclear how many deaf people live in Vermont.

"Vermont does not keep statistics, so there are no real numbers," Essex said. She has heard estimates ranging from 15,000 to 25,000 individuals with all types of hearing loss. The Gallaudet University Library website, which cites 2012 community survey data collected by the U.S. Census, says Vermont has 10,000 people between ages 18 and 64 with hearing difficulties.

In a recent telephone interview using TTY — a telephone service that converts typed messages to voice and voice to text — Essex explained the hardship created when the VCDHH closed. "Now there isn't anything like that," Essex said. For folks trying to find services, "it is a lot of running around." She added, "A lot of people will call me. I'm really, really overwhelmed."

Some organizations stepped in to keep critical programs alive.

The Vermont Center for Independent Living provided a home for the Vermont Interpreter Referral Service, which helps to connect the state's 25 certified sign-language interpreters with individuals and organizations. The Vermont Agency of Education contracted with Nine East Network to provide school consultation services and parent-infant programs for deaf and hard-of-hearing children.

Still, many services — such as community sign language classes and one program that brought deaf individuals together to learn and connect — no longer exist, according to Essex. And though Austine's enrollment declined, the demand for such services remains.

Government policies that mandate the mainstreaming of students with hearing loss, coupled with medical advances such as the cochlear implant, led to the shrinking student numbers at Austine School.

With cochlear implants, an electronic receiver is secured to the skull and an electrode is threaded into the cochlea, a structure of the inner ear, so electronic signals can be picked up by the auditory nerve. The external parts include a tiny microphone, speech processor and transmitter, the last of which attaches magnetically to the receiver in the skull.

The devices won Food and Drug Administration approval for use in adults in 1984, and in children in 1990. The implants are appropriate for children as young as 12 months, and the technology continues to evolve.

For many newborns diagnosed with hearing loss, cochlear implants offer a way to substitute electronic hearing for nature's version. Children who undergo early implantation and receive professional therapy and parental support "catch up to their hearing peers as far as language development by age 5," said Margaret Sicotte, an audiologist and cochlear implant coordinator at the University of Vermont Medical Center's Otolaryngology Clinic.

Of the 11 infants born in Vermont with profound hearing loss between 2009 and 2014, 10 got implants, according to state health department data.

Jen Durgin of Wilder is the mother of two children with profound hearing loss who both got cochlear implants as toddlers. Durgin's daughter Geneva, now 8, failed the newborn hearing screening, and ,by the time she was 3 months old, hearing specialists had diagnosed the cause of her deafness: the hair cells in her cochlea couldn't communicate.

The Vermont Center for the Deaf and Hard of Hearing explained the options to Durgin and her husband and helped the couple gain some signing skills so they could begin communicating with their baby. The family chose cochlear implants for their daughter, and later for son Samuel, now 5, "because we thought it would give them the best access to fluent language," Durgin said.

"Interpreters are wonderful, but it is not a natural way to learn or communicate with friends," Durgin said. Still, she wants her children to master sign language as well as spoken and written English.

Cochlear implants worked well for Durgin's children: Geneva needs no accommodations in her second grade class at the local public school and "is above grade level in reading," her mother said. And Samuel's "speech and vocabulary are above average for his age."

But the implants do not work for everyone. Neila didn't qualify because she does have some hearing. "When she loses it all, she can decide for herself," Tammy Eaddy said.

Legislation that would guarantee deaf Vermonters those options isn't yet a political priority at the Statehouse, but Senate Government Operations chair Jeanette White (D-Windham) expects that her committee will discuss the questions the deaf community has raised. The panel took testimony last week.

House Human Services Committee chair Ann Pugh (D-South Burlington) said the focus of the House bill seems to be "how individuals who are deaf or hard of hearing can get educated now that the Austine School has closed." She suggested, "It is really part of a larger discussion about mainstreaming."

Activists like Tammy Eaddy plan to keep the pressure on lawmakers. Back at Eaddy's dining room, Neila asked her mother why she was still going to advocacy meetings. Eaddy looked at her and signed, "The fight is not over."

The original print version of this article was headlined "Sign of the Times: Deaf Vermonters Seek Better Options for Services and Schooling"