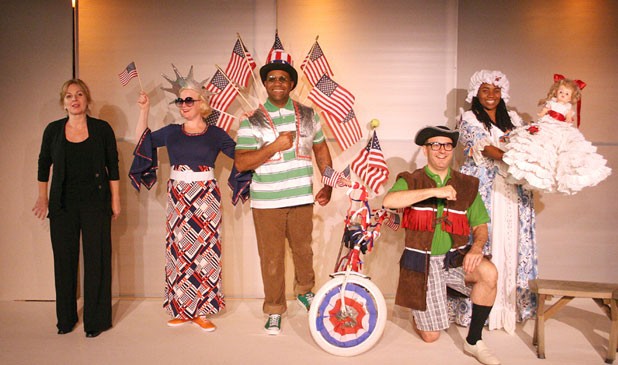 Chronic illness is a devastating experience: physically painful, emotionally isolating, poorly understood and even actively ignored by those who are healthy. And as Lisa Kron's play Well shows, family relationships can suffer greatly. The Hallmark-card image of relatives caring selflessly for ill loved ones often turns out to be a myth. When illness drags on for years or decades, even dedicated caregivers sometimes wonder, as Kron does, “Why can’t you make yourself well?”

Well confronts a provocative topic in ways not ordinarily addressed in society, let alone on stage. For this, it received generous praise from critics (and two Tony nominations) during its brief Broadway run in 2006. Audiences, however, came in smaller numbers, perhaps because the play’s achievement doesn’t always match its ambition. Kron puts the sausage-making side of theater on display, self-consciously incorporating the playwriting process with “Lisa Kron” as a lead character. She ends up with a bit of a theatrical hot mess as she tries to stuff three large and untidy subjects into one script.

Kron tackles illness versus wellness, the tangled emotional web between mother and daughter, and meta-issues of modern stagecraft. In posing so many questions, she sometimes yields unsatisfying or trite answers. Scenes amuse, monologues touch heartstrings, and insights occasionally land with force. But byproducts of unfulfilled promise still litter the stage when the evening’s one long act ends.

The playwright does create one perfectly formed character — her mother, Ann Kron — that makes the whole effort worthwhile. In the current production at Burlington’s Vermont Stage Company, Dale Soules brings Ann movingly to life, mostly from a reclined position in a La-Z-Boy. Speaking in a soft, raspy voice and wearing a dowdy teal house-dress, Soules shows how Ann’s resilient spirit quietly defies the confines of her body. To paraphrase David Copperfield, Ann turns out to be the hero of her own life.

Summarizing the play’s plot is difficult. At the outset, “Lisa Kron,” who directs events as they unfold, describes the exercise as “a multi-character theatrical exploration of issues of health and illness both in the individual and in the community.” (The phrase is so pretentious and ungainly that she has to read it from note cards she keeps in her jacket.) Furthermore, Lisa insists, “The play is not about my mother and me.”

Of course, the play is entirely about Lisa and Ann, who has been sick for as long as Lisa can remember. Ann’s disabling illness is never exactly specified. Lisa diagnoses it somewhat dismissively: “These days her condition would probably be labeled chronic fatigue syndrome or fibromyalgia or one of those, but whatever it is . . .” She doesn’t finish the sentence. As Ann later points out, citing Susan Sontag, “Whenever the cause of an illness is mysterious, it’s assumed to come from psychological problems or moral weakness.”

A quartet of other actors performs scenes from the Krons’ past. The flashbacks center on Lisa’s time in a hospital allergy unit, when she was treated as a young adult for an illness similar to her mother’s condition, and on Ann’s work to integrate their Lansing, Michigan, neighborhood when Lisa was a child. The actors reflect Lisa’s memory of events, re-enacting them with huge comic exaggeration, as the “exploration”’s script prescribes. In the hospital, for example, the other patients seem like raging drama queens, while Lisa is curiously calm.

Ann watches warily from a corner of the stage in her recliner, trying to be supportive of her daughter. But she eventually throws the bullshit flag on Lisa, in a modest, Midwestern way. “It’s just that I’ve noticed a number of little inaccuracies as you’ve been going along,” Ann remarks as the final allergy unit scene plays out. “It’s almost like you’re trying to make it seem like you weren’t really sick in the hospital.” The actors, drawn to Ann’s honesty, break character to interact with her. They ultimately rebel against what they perceive as Lisa’s exploitation of her mother’s story.

Does the play feel messy because the playwright has deliberately created it that way? Yes. Are some questions unresolved because, hey, that’s real life, especially in the painful world of ongoing illness and tricky family relationships? Yes. But the play undermines itself because the central character of “Lisa Kron” remains deeply unappealing, unable to transform herself or even achieve much insight.

The playwright Lisa Kron has written a love letter to her mother but hate mail to herself. This sets one lead actress up to hit it out of the park — as Dale Soules does portraying Ann Kron — and the other, frankly, to struggle.

Lisa Kron is neurotic, uncomfortable on stage and in her own skin, coming slowly undone as her “theatrical exploration” does. Lisa Barnes shows us Lisa Kron’s initial bright-eyed enthusiasm draining away, with facial features that begin to droop and shoulders that sag. Barnes is playing a performer who fundamentally can’t connect — with her mother, fellow actors or the audience. It feels like Barnes doesn’t connect. So is that nailing the role, or somehow missing a deeper mark? Hard to say.

Soules, as Ann, develops a riveting portrait of quiet dignity. She shows Ann’s physical limitations as Ann lives them: unmistakable, but not what she wants you to focus on. She walks with a constricted gait, slightly bent over, with her hands resting on stiff hips.

Ann’s passion comes from muted, matter-of-fact reflections, which Soules unspools in a flat Midwestern accent. Soules holds the audience absolutely rapt during Ann’s extended monologue about her work fighting segregation. “There’s so much I would like to do if I had the energy. You can’t imagine,” she says. Ann doesn’t indulge in self-pity; her only regret is that her illness prevents her from making a bigger difference in the world.

The other cast members take on their over-the-top, multiple-role assignments energetically. Jason P. Lorber excels as the wacky clinic doctor (bulging eyes and unctuous bedside manner) and an über-dorky neighbor (geeky walk to match his outfit). Edgar L. Davis shines as a mustachioed, beer-swilling neighbor and his eager-beaver, music-loving son. Chris Caswell and Winnie Looby create touching portraits of allergy clinic patients. We see the pain of their struggle underneath the loopy behavioral extremes scripted in the “exploration.” Caswell also works beautifully as the actress who drops character and connects with Ann, showing a filial compassion that Lisa never manages.

Perhaps playwright Kron felt she had to malign herself as a character to make her mom stand out as a heroine? The truth is usually much more subtle, and frustrating, in the ongoing dance between the chronically ill and their loved ones. The most insightful speech about this dance goes to allergy unit patient Kay, on the day she’s getting discharged to the care of her sister:

“I’m SO ANGRY, LISA. I know she thinks if she were me, she’d be better, but do you know what the problem is with being sick? It’s that you’re sick. People who are healthy think they know how you could get better . . . They imagine that sick people have all the resources they do and that they’re just not trying hard enough . . . I think, you suffer for just one day the way I do . . . Then you tell me how to get better.” Kay pleads passionately for a kind of integration that can never happen: for a healthy person to understand what it’s like to walk in a chronically ill person’s shoes.