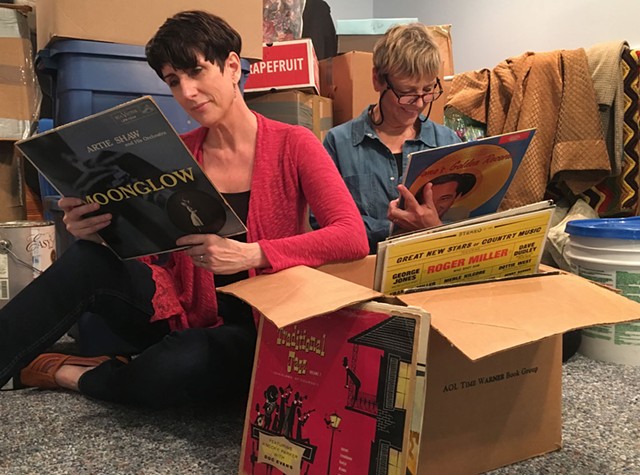 This weekend, Carole Vasta Folley brings her new play, The Seymour Sisters, to the Main Street Landing Performing Arts Center in Burlington. It's the final stop of a summer tour that has taken the work to four other towns around Vermont. The playwright's previous works were comedies with elaborate sets and larger casts — such as The Family of Ewe and Alumni Pie, both produced in recent years by Girls Nite Out. But Vasta Folley stripped this one to bare bones: two characters, no set. Just to see what would happen.

It's been two years since she decided to write this play, Vasta Folley tells Seven Days over coffee at Winooski's Scout & Co. "I knew I wanted to write strong roles for women our age," she says, gesturing to herself and Sisters costar Robin Owens. Vasta Folley, who also directs and produces, is in her fifties. Owens is a retired air traffic controller. "Then the characters started revealing the story," she continues. "I didn't intend to write a drama, and I didn't expect it to go where it went."

The Seymour Sisters "went" to two estranged siblings tasked with cleaning out their deceased parents' home. Onstage, mountains of possessions, old furniture and cardboard boxes represent a shared history that has been hidden away. Trauma lingers beneath the surface of the sisters' reunion. The threat of cancer is a reminder of common genetics. Though the play contains levity and laughter, the subject matter is solemn: The slightest provocation from one woman can set off an avalanche of hurt feelings and resentment in the other.

If the storyline rings a bell, perhaps you caught the spring 2015 performance of The Seymour Sisters, a production supported by a Vermont Artists' Space Grant from the Flynn Center for the Performing Arts. Later that year, Vasta Folley was awarded a grant by the Vermont Arts Endowment Fund of the Vermont Community Foundation, which allowed her and Owens to take the show on the road.

The experience encouraged the Essex Junction playwright to make significant changes to the script. "I like the idea of writing a play from the inside out," Vasta Folley says. "The journey I've taken as a character has been surprising and unexpected and has impacted the play."

Now, she concludes, "I'm finishing the play in Burlington."

Vasta Folley is no stranger to self-production. She cites a 2015 article in HowlRound — an online forum for all things theater — titled "The New Playwright Problem." In it, author Natalie Gershtein describes a growing conundrum in the American playmaking circuit: "Although there are hundreds of struggling playwrights yearning for a production, there are also independent producers and small not-for-profits hearing the words, 'You can't produce my play first, because then the larger theatres won't want to produce it.'"

In other words, playwrights often ignore the bird in the hand while waiting for two in the bush. Vasta Folley has no use for this. "I don't want my plays collecting dust in a drawer," she says.

She took matters into her own hands by producing The Seymour Sisters in Bradford, Springfield, Stowe and Waitsfield at small venues that do not usually get new work. (The show was also a financial boon for those theaters, which got half of the proceeds.) "I never imagined this tour would help me get my name out there," Vasta Folley says. "Now I have a following outside Chittenden County!"

Audiences probably won't have to wait long for more work from this productive writer. Vasta Folley has two plays in process: The Replacement Wife, a tale of mistaken identity; and After Chrissy, which examines the right to die.

Will Vermonters see multi-city tours with those shows, too? Not likely. It's one thing to go through all those prop boxes onstage; it's another to have to pack them up and take them home with you after each show. "Although this has been a tremendously transformative experience," Vasta Folley says, "I don't imagine I would be doing it again any time soon."