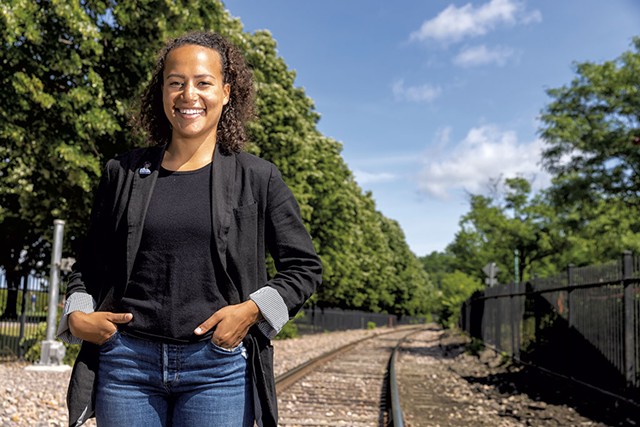 Sianay Chase Clifford, a political newcomer from Essex, has dropped out of the race for Vermont's lone U.S. House seat, shaking up the Democratic primary just weeks before the August 9 vote.

A former aide to U.S. Rep. Ayanna Pressley (D-Mass.), Chase Clifford was running as a Democrat in a field that includes Vermont Sen. Becca Balint and Lt. Gov. Molly Gray. Chase Clifford, who entered the race in March, lacked funding, she told VTDigger.org, which first reported the news on Tuesday.


"I think for my campaign, I really wanted to be able to tell the story that you don't need to do this with a lot of money and that regular people should be able to do this," Chase Clifford told the outlet. "Unfortunately, what is really kind of sick and twisted about electoral politics is if that's your message, you still need money to be able to share that message."

Related In U.S. House Race, Gray Has Most Cash Heading Into Primary Homestretch

In U.S. House Race, Gray Has Most Cash Heading Into Primary Homestretch
By Sasha Goldstein
News
Balint and Gray have each raised nearly $1 million since they entered the race in December, and both have a significant amount of money on hand heading into the final weeks before the August 9 primary. According to campaign finance filings for the second quarter, which ended on June 30, Chase Clifford raised about $20,000 and spent most of it, leaving her just $429 cash on hand.

A fourth Democratic candidate, Louis Meyers, a Rutland Regional Medical Center physician, raised about $257,000 and had about $240,000 in the bank, the filings show. Most of Meyer's cash came from $250,000 he loaned his campaign.


“I kept feeling like, you know what? I can just work harder to raise more money, and it got to a point where I'm like, I cannot work any harder,” Chase Clifford told Digger.

In the August 9 Primary, Democratic Candidates Compete for the Jackpot: Vermont's Lone U.S. House Seat
By Chelsea Edgar
Politics
Chase Clifford's name will remain on the ballot, and some Vermonters have already voted. She has not endorsed any of her former rivals, telling Digger she doesn't "have a strong enough relationship with any of the candidates to feel comfortable doing that."

Both Balint and Gray released statements thanking Chase Clifford for running and wishing her well.

"We have been lucky to have her voice in this race," Balint wrote. "I know she is going to make an enormous difference in our state, whatever she chooses to do next."


"There are many paths to public office, and Sianay’s experience and skills are important proof of that," Gray wrote. "Throughout this primary, she has demonstrated a true commitment to progressive values, a thorough command of the issues, and an unmistakable clarity of purpose."

Chase Clifford isn't the first candidate to bow out. State Sen. Kesha Ram Hinsdale (D-Chittenden) left the race in May and endorsed Balint.

Chase Clifford ran to the left of the field and earned the endorsement of the Vermont Progressive Party but not U.S. Sen. Bernie Sanders (I-Vt.), who has backed Balint.

Bernie Sanders Endorses Balint in Vermont's U.S. House Race
By Sasha Goldstein
Politics
"Becca has been a champion for labor and all working people," Warren said in a statement. "Her record shows she works for the people, not corporate interests. Becca has the experience, the record, and the grit to fight for families in Washington. That's what we need. She is a mom, a public school teacher, and a leader. Let's send her to Congress.”

Warren has gotten involved in Vermont politics before: In 2020, she endorsed Gray during Gray's general election run for lieutenant governor.

In Vermont’s U.S. House Race, D.C. Insiders, Lobbyists Sign Up for Team Molly Gray
By Sasha Goldstein
Politics
Gray hasn't gotten much national backing this time around, though she earned endorsements from former Vermont governors Madeleine Kunin and Howard Dean. On Monday, Marcelle Leahy, wife of outgoing U.S. Sen. Patrick Leahy (D-Vt.), endorsed Gray, who interned with the senator and has close family ties to him.


"I am supporting Lt. Governor Molly Gray because her deep connection to rural Vermont means they will have a strong advocate in Congress," Marcelle Leahy wrote in a statement. "I want my grandchildren to have a role model who will fight for the rights of every Vermonter and every American."