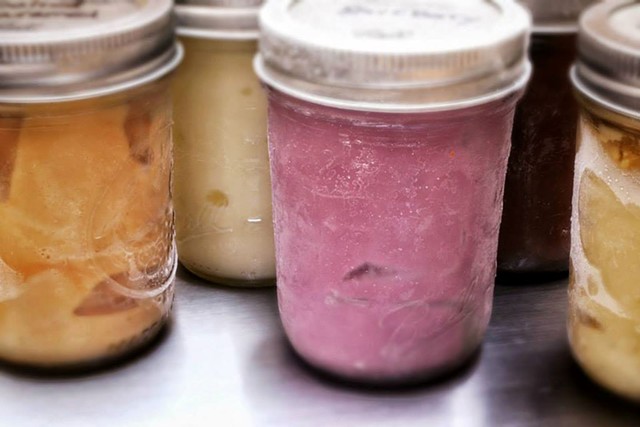 Gelato is not just "Italian ice cream." A scoop clings to the cone with a consistency approaching soft-serve; the temperature is slightly warmer, the body thicker. And many stateside versions of this edible export don't fit the bill. Shy Guy Gelato, a new, small-batch gelato business from Tim Elliott and Paul Sansone, is dedicated to getting it right.

Two years ago, Elliot was working at Burlington's Zabby & Elf's stone Soup when Sansone began visiting with homemade gelato samples. "I was busy, but one day he brought me in a sample of cornflake gelato," Elliott recalls. "That changed my mind."

Sansone grew up with an enthusiasm for food inspired by his Italian American heritage, then spent years cooking in restaurants. Five years ago, he bought a one-way ticket to Abruzzo. He spent a year cooking across Italy, then returned to Jericho with an itch to re-create the gelato he loved, using Vermont ingredients and Italian technique.

"I loved the idea of learning something abroad and bringing it back to the place I grew up," says Sansone, a Jericho native. "When you make something you love, you're handing [that love] out to people."

In March 2015, the duo began developing recipes in Elliott's home kitchen. They invited friends and family over for Sunday tastings. A year later, they started fundraising for a production facility and scoop shop.

This July, Shy Guy Gelato will move into the former Panacea Pizza space on Burlington's St. Paul Street. (Panacea closed earlier this spring; its owners are seeking a new location.) While Shy Guy's South End location will be dedicated to gelato production, Elliott and Sansone plan to start selling scoops from an imported gelato cart outside Kiss the Cook on Church Street in mid-July.

Flavors will include classics like fior di latte and hazelnut, as well as less traditional tastes such as Vietnamese coffee, cucumber-tulsi, sweet potato and — Elliott's personal favorite — strawberry-rhubarb. Dairy comes from Monument Farms in Weybridge, while other ingredients may be local (mint and tulsi from Elliott's garden) or imported (premium hazelnut paste from Italy). Once open, the cart will serve gelato afternoons and evenings, Wednesday through Saturday.

The original print version of this article was headlined "Summer, Italian-Style"