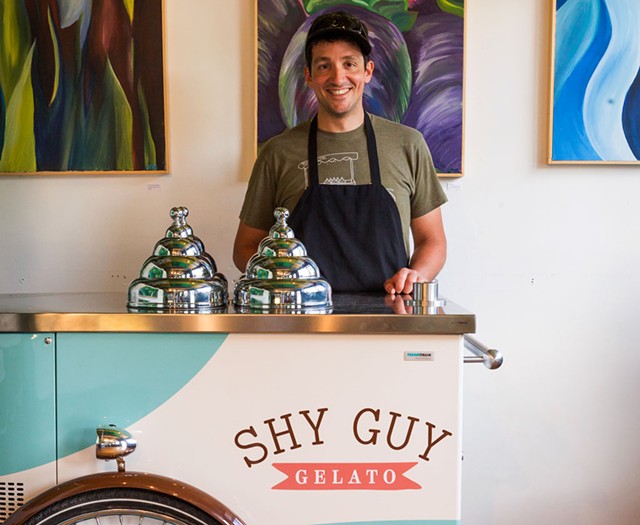 My love affair with gelato began almost two decades ago. I was 23, backpacking alone in Italy, and got lost trying to find my way back to my hotel in Venice. After an hour circling the labyrinthine streets, I spotted a sign for a gelateria at the end of an alleyway. Ducking out of the sun, I tasted my first-ever gelato — a creamy, fresh cantaloupe I can still recall years later.

Taking bites of the cold, replenishing treat, I continued to round one dizzying street corner after another, eventually finding my way back to my room. Sadly, when I tried to find the gelateria the next day, it had mysteriously disappeared among the bridges and canals. However, its name, Gelateria Nico, is forever memorialized on the inside cover of my Lonely Planet guidebook, scrawled next to the words "Buonissimo! Best gelato in Venezia."

In Italy, gelato is not merely a dessert. It's part of a cultural ritual, like going to Sunday Mass or eating fish on Christmas Eve. Going out for a gelato with family or friends provides an excuse to saunter around the piazza and enjoy the last moments of the day together.

Though I appreciate a maple creemee as much as the next gal, my Italian American taste buds often get restless for more. When this happens, I take a stroll through Burlington's South End to Shy Guy Gelato, which sits at the bustling five-way intersection of Howard and St. Paul streets and South Winooski Avenue.

Housed in a bright-blue storefront, the shop is small and cheery, with one table inside and three on the patio out front. Owner Paul Sansone, 38, got his start as a cook at age 17 and worked for years in local restaurants, as well as out west. At 30, eager to explore his Italian roots, the Jericho native sold all his belongings and spent a year cooking in Italy, first in his great-grandfather's region of Abruzzi and later in a restaurant in Parma.

Sansone still recalls his first bite of gelato in Rome.

"A light bulb went on," he said. "It was hazelnut, and it was amazing. It's still my favorite flavor."

Sansone honed his gelato-making skills with help from his southern Italian coworkers, then returned to Burlington and took a cook position in a local Italian restaurant. But after several months, frustrated by meager wages, he decided it was time to branch out on his own. He teamed up with Tim Elliott, co-owner of Zabby & Elf's Stone Soup, and the two began experimenting with gelato making, selling their creations out of Elliott's St. Paul Street home.

After a year, Sansone says, the lines were out the door, so he and Elliott decided to take the plunge. They raised money through crowdsourcing, took out a loan and moved into the South End location in July 2016.

The neighborhood has been a good home for the gelateria. On a recent Saturday evening, the street corner was hopping. I stepped inside to be greeted by Sansone himself. He'd been up since 5 a.m., when he dropped off Shy Guy's gelato cart on the Church Street Marketplace.

Sansone and assistant gelato maker Becca Pilgrim make six new flavors each day by hand. Over the past two years, they've invented more than 100, including lavender-Earl Grey, horchata, and Vietnamese coffee. When ordering gelato, there's an art to choosing flavors that complement each other, and Italians often select three at a time.

Sansone advises mixing soft, creamy flavors with bright, fruity ones. Following this advice, I chose white malted milk ball and fuchsia-colored beet. Yes, beet. "I want to wear this, it's so pretty," I joked at the register.

I settled down at a patio table, donned a straw hat and pulled out a book. I took a bite of the beet. It was surprisingly rich, the earthiness of a summer garden balanced with just the right amount of sweetness. I followed it with the malted milk ball and drifted into paradiso. Dark chocolate slivers provided the perfect finishing crunch.

The door opened, and two pretty twentysomething women emerged: a brunette, dressed in green shorts and juggling a camera along with a cup of gelato; and a blonde wearing sunglasses, platform sandals and a short, form-fitting pink-and-white dress. The color in her dress echoed that of the gelato in her cone, making it a fashion accessory. As they passed, I leaned over and asked, "Did you order that because it matches your outfit?"

"Actually, yes," she said with a smile. "My friend is a photographer, and she wants to take some photos."

The women sauntered away down St. Paul Street, looking like they belonged on the streets of Rome.

Moments later, a family with four towheaded boys settled down at the table next to me. Soon I was chatting with the woman, who turned out to be a scientist and writer from Bangor, Maine. "We're in town visiting, and we've come here two days in a row," she confessed. "I've had gelato at the best gelateria in Rome, and this beats it. Really."

Beside her sat one of her sons, about age 10, with long, shaggy bangs and freckles. A dollop of chocolate gelato clung to his bottom lip, and his shorts were streaked with brown stains from where he had wiped his fingers.

"My dad thought my shorts were dirty, but I told him it was just chocolate from yesterday," the boy said. "I got chocolate again today because it's my favorite flavor. It helps me stay up late at night."

One of her younger sons swallowed a bite of lime gelato, pulled aside his lip and pointed to a space at the back of his mouth.

"A tooth is growing there," he said, beaming. "It's growing right now!"

"Do you think gelato is better than ice cream?" I asked him.

"What?" he answered, confused. "This is ice cream."

I decided not to bother telling him the difference. Simply put, gelato has less air than ice cream because it's churned, not whipped, which makes it much denser. It's also served about 15 degrees warmer than ice cream, which helps to bring out the flavors. The fact that gelato is made with more milk than cream and without egg yolks makes it generally lower in calories than ice cream.

A motorcycle snarled past us, followed by a car with the windows rolled down. Inside, teenage girls were singing to Journey at the top of their lungs.

Sansone walked out, plopped into the seat beside me and surveyed the busy intersection.

"Yeah," he agreed. "Or some grass. Last summer they closed off the street for a day and put orange cones out to slow down traffic. It was so nice.

"One day," Sansone added, "I'd like to expand and sell food, too. In Italy, I worked with these great old ladies who made homemade pasta. I'd love to do that."

A man walking down Howard Street came toward us.

"That's a retired professor who comes in here every night to buy two pints of gelato," Sansone explained. "The people in this neighborhood are so great. Before I had this place, I was kind of a hermit. Now I know everybody."