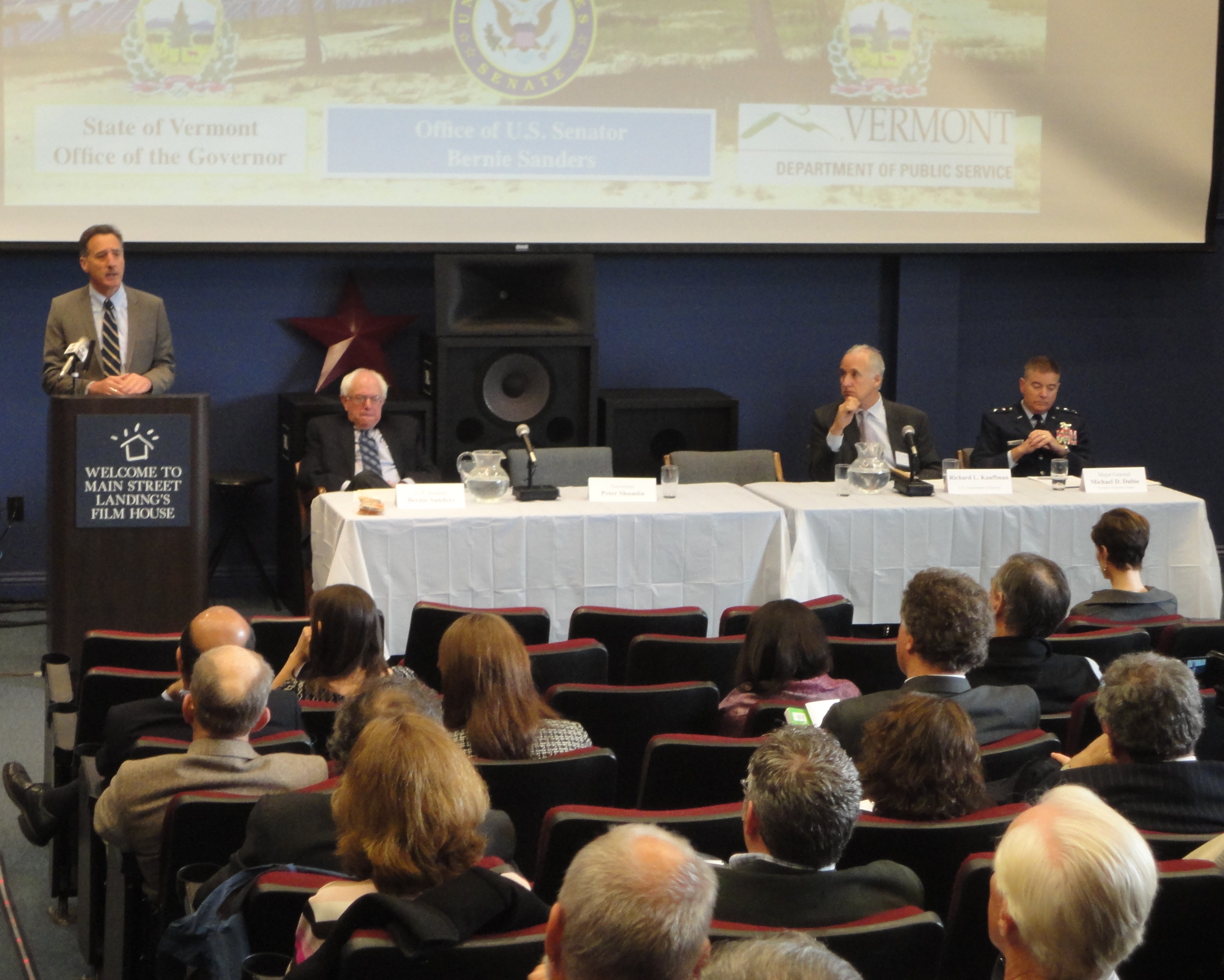 Lest there be any doubt, Gov. Peter Shumlin has dug in deep behind the deal struck by his Department of Public Service and Green Mountain Power in the company’s bid to merge with Central Vermont Public Service.

Speaking Monday morning in Burlington at a clean energy summit organized by Sen. Bernie Sanders, the governor twice brought up the growing debate over the merger, calling it “ironic” that Vermonters would “quibble” over a contested $21 million portion of the deal instead of focusing on what he sees as, overall, a good deal for ratepayers.

“It’s ironic to me that [when] we talk about a merger that’s gonna save Vermonters $150 million in 10 years, that we quibble over whether or not we should be putting another $21 million into energy efficiency measures instead of sending out small checks to people we can’t find 12 years later,” he said, before returning to his scripted remarks.

After simmering for weeks, tensions boiled over last week in the Vermont Senate, with legislators grilling DPS Commissioner Liz Miller on Thursday about whether she negotiated the best deal possible for ratepayers. Specifically contested is a $21 million “windfall” payment owed to CVPS customers for bailing out the company in 2001 when it faced bankruptcy. While the Shumlin administration believes the money should be invested in weatherization and energy efficiency measures, AARP and a growing number of legislators believe it should be refunded to consumers.

In his remarks at the summit, Shumlin exhorted audience members — a who’s who of private- and public-sector energy muckety-mucks — to stand behind the deal’s investment in energy efficiency.

“I ask each of you in this room, when you hear conversations about whether we should be spending money on energy efficiency or checks back to Vermonters — small checks — I would say that’s a place where we should all stand together and say, “'Listen, are you kidding? We thought we put that debate to rest.’”

Rep. Oliver Olsen (R-Jamaica), who has criticized elements of the Shumlin administration’s deal with Green Mountain Power, took issue with the governor’s characterization of the debate.

Olsen says the governor misses the point: that legislators aren’t principally concerned about how ratepayers are reimbursed, but rather if they’ll be reimbursed by Gaz Metro, which is Green Mountain Power’s parent company. As the deal between the administration and the company stands — a deal that can be approved, rejected or amended by the Public Service Board — the utility can actually recoup the $21 million they invest in efficiency by charging ratepayers, plus interest.

“We’re jumping the gun by entering into a discussion about how to spend the $21 million when we really haven’t settled the question of where the $21 million would come from,” Olsen said. “The big problem I have with this whole proposal is that we’re asking ratepayers to pay even more while allowing Gaz Metro to keep the $21 million that they owe Vermont ratepayers.”

In an interview following the summit, Shumlin roundly criticized legislators’ attempts to shape the outlines of the merger. Arguing that, “the process question really matters,” the governor said it’s up to the independent Public Service Board — not elected officials — to settle on details of the merger.

Whether the legislature will end up taking action on the merger is an open question. House Speaker Shap Smith has come out strongly against interfering in an open Public Service Board docket. While many in his chamber and in the Senate appear to oppose portions of the merger agreement, consensus around how to take action appears elusive. And while Senate President Pro Tem John Campbell seemed to side with the merger naysayers last week, he has yet to outline whether and how the Senate might act on the matter.

Campbell did not immediately return calls for comment Monday.

Sen. Vince Illuzzi (R-Essex/Orleans), an outspoken opponent of the windfall portion of the deal, says he’s pessimistic that his side will prevail.

“I think in the end game, [Shumlin] wins because he’s got Shap Smith in his corner and, regardless of what the Senate does, the House will not act,” Illuzzi said. “So Gaz Metro and Shumlin win. If I were outlining the book, that would be the concluding chapter.”

For his part, Shumlin’s strategy appears to be to dig in, support Miller and wait for the controversy to blow over. With the legislature nearing adjournment and opposition scattered and diffuse, the governor may be able to count on legislators losing interest and moving on.

One factor that could complicate Shumlin’s strategy, however, is AARP’s continued public relations campaign against the administration’s position. Since February, the senior advocacy organization has been advertising on television, in print and through direct mail — arguing that the 35,000 of its members who live in CVPS territory are getting a bum deal.

According to AARP spokesman Dave Reville, the group is launching its third television advertisement today on WCAX-TV and cable channels. A second direct mail piece to the 35,000 members in question will reach mailboxes this week.

“It’s a fairly extensive campaign and we’re hearing from a lot of members,” Reville said. “We know there’s been a couple hundred calls into [Shumlin’s] office, and this mailer hasn’t even hit yet.”