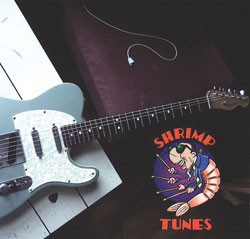 Shrimp, the briny moniker of Cabot’s Greg T. McElwain, is well known locally as a member of Mark LeGrand and His Lovesick Bandits, Abby Jenne and the Enablers and the Rebecca Padula Band, among other central Vermont-based outfits. As a solo artist, the multi-instrumentalist and songwriter is equally active, gigging regularly at watering holes throughout the state. On his latest release, Shrimp Tunes, McElwain presents a collection of original songs rooted in Gulf Coast blues that displays impressive technical prowess and a sly, if at times silly, charm.

The disc opens on “I Like Pigs.” A meandering electric riff skirls over a jaunty acoustic progression, flecked with harmonica courtesy of PB Jr. Shrimp’s blues growl is more of a fine-grit croon, and McElwain uses it to nice effect, especially when counting the ways in which he admires barnyard animals. (Short and round, by the inch and by the pound, etc.) The song is something like Dr. John meets Dr. Seuss, which isn’t a bad thing.

That ode to hog heaven is followed by a version of Professor Longhair’s “Her Mind Is Gone,” one of the album’s two covers — the other is a stiff take on the Meters’ “Hey Pocky Way.” As he does for most of the record, here McElwain does all the heavy lifting musically, playing drums, bass, guitar and piano. Shrimp will never be confused with Bald Head Byrd, but this is a passable interpretation of the New Orleans legend’s tune.

The record comes to a bizarre, halting head on “The Harbor.”Above a ripple of hand drums and open acoustic-guitar sustains, McElwain tweaks the melody from Chariots of Fire with synth keys — it’s nearly identical save for the resolving note at the end of that song’s signature phrase. Given the more organic blues fare surrounding it, Shrimp’s synth-y instrumental interlude is wildly out of place.

He bounces back on the next cut — the cheeky, roadhouse rocker “I Drive the Car.” That guitar-fueled scorcher is followed by the dark, sinewy groove of “Misery Train.”

Shrimp closes the record with a lounge-y piano ballad, “West End Avenue.” It’s a wistful rumination on a former life that, if a touch sappy, has a certain rainy-day appeal and reveals true heart.