Should I Take My Fiancé's Surname Just to Make Him Happy? | Ask the Rev. | Seven Days | Vermont's Independent Voice

Should I Take My Fiancé's Surname Just to Make Him Happy? 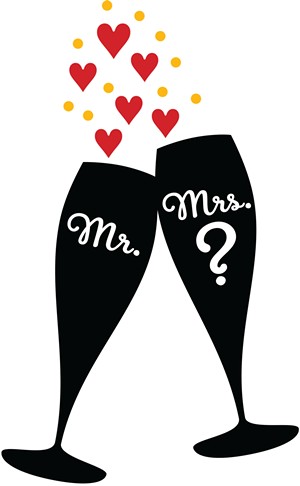 My fiancé and I are getting married next year. We were having dinner with his parents the other night, and his mother said she couldn't wait 'til there was another "Mrs. Their-Last-Name" in the family. I brushed it off, but it made me realize that he and I hadn't discussed the name-change idea. On the way home, I told him I wasn't planning on taking his name. I assumed he wouldn't care, but he was surprisingly upset. Should I just do it to make him happy?

We're not talking about compromising on pizza toppings here. It's your name — the identity you've had your whole life. You shouldn't feel pressured to change it just because your fiancé is a little grumpy.

It befuddles me when married women who have taken their husband's name talk about smashing the patriarchy. They're participating in one of the most socially acceptable forms of sexism ever. The custom originated in a time when women were considered the property of their husbands. Somehow, centuries later, it's viewed as tradition.

Granted, some people think it's romantic and signifies a couple's bond. But I think most people do it just because that's the way it's been done forever — and we all know that's rarely a good reason to do anything.

If hubby-to-be is stuck on sharing a last name, explain to him how you feel and ask whether he'd consider taking your name instead. That may change his tune, but you never know — he may just go for it. A recent survey showed that 3 percent of married men in the U.S. took their wife's surname. It's not a particularly popular choice, but it does happen. You could also ponder the option of each taking a hyphenated version of both last names.

I don't imagine this name hubbub will wreck the wedding, but one thing is for sure: If you're planning to have children, you ought to figure out how you're going to handle their last name before they arrive.