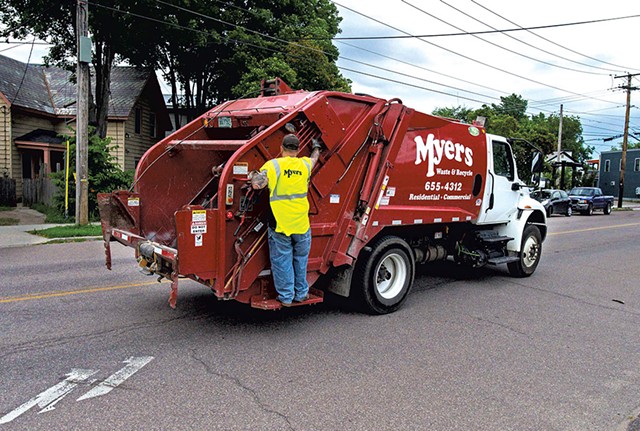 Hogan, the chair of Burlington's Public Works Commission, thinks there's no need for so many noisy, polluting vehicles. He was so sick of the trucks that a few years ago he considered asking his neighbors to switch to a single hauler.

"It'd be nice to have fewer collection trucks coming down the streets rather than more," he said.

Hogan may soon get his wish. After years of debate, the Burlington City Council is poised to approve a plan next month to consolidate the collection of trash, recycling and food scraps for the city's 13,000 households of up to four units — the majority of Burlington's housing stock. But how that consolidation happens has become a political flash point.

Council Progressives favor a municipal model by which the city would collect garbage, compost and recycling. Democratic Mayor Miro Weinberger's administration, however, prefers a so-called hybrid system, in which the city would continue its recycling program but "franchise" trash and food scraps to private haulers, who would bid for different city districts.

Last month, Hogan and four other public works commissioners endorsed the hybrid model in a 5-1 vote, but a Prog-led subcommittee chose the municipal model, 2-1. Meantime, waste haulers large and small have cried foul, saying consolidation could kill their businesses.

A council vote is expected on August 9. Despite the political division, most city officials agree that consolidating is the way to go.

"It's something we all rely on," Councilor Jack Hanson (P-East District) said of waste collection. "This is definitely one of the biggest decisions ... that will have an impact for decades on the day-to-day reality of the community."

Burlington has been in the waste collection business since 1989, when it started a recycling pilot program. In 2000, councilors agreed to study a consolidated system but took no action on the resulting report. The topic resurfaced nine years later when the Chittenden Solid Waste District, which operates the county's garbage drop-off centers, launched a six-year regional study of consolidated waste removal that faced strong opposition from private haulers and went nowhere.

In 2018, the council started yet another consolidation study. The issu e became more complex last year after the state prohibited food scraps from being tossed with household garbage — but didn't require large haulers to pick it up. Boutique compost haulers have sprung up to fill the gap.

Municipalities in the U.S. commonly collect waste or hire a single company to do it, but most Vermonters pay for a private company to pick up their garbage or drop it off themselves at the town dump. Few, if any, Vermont communities pay public employees to collect trash, which results in several private companies serving the same neighborhoods. At least five trash haulers do business in Burlington, as do several compost operations. The city picks up recycling from all residences weekly, though some large multiunit buildings contract with private companies.

Burlington Public Works Director Chapin Spencer said consolidated collection would be more convenient for residents who have to remember which days to set out their trash, recycling and compost bins. Under either of the new systems, the city could mandate that all three are picked up on the same day, which would limit truck routes and emissions. A report by GBB, the solid waste management consultants the city hired for its most recent study, found that consolidated collection could reduce truck traffic by up to two-thirds, depending on how many residents participate.

Both the hybrid and municipal models could save residents money. GBB's study found that most Burlingtonians pay between $28 and $49 a month for weekly trash and recycling service, plus about $15 a month for compost hauling. The hybrid system would cost them between $34 and $38 monthly, whereas the municipal one would top out at $41 a month.

"We're able to ... offer the collection of three streams really for the price of what people are paying currently for two," Spencer said.

Under either model, the city would allow people to haul their own waste. About 15 percent of people who responded to GBB's surveys bring their trash to the dump and pay just a few dollars per bag. Because a consolidated system would bill customers directly, self-haulers would not be charged for a service they don't use, Spencer said.

The public works director is pushing the hybrid model because it's less expensive than full-on municipal service and builds on the city's recycling program, which costs about $600,000 a year to operate. The program is largely funded through a surcharge that customers pay to private haulers, who then pay the city. Switching to a hybrid model, which would require some additional staffing, would increase this tax by $2 a month, raising an extra $312,000 in revenue annually.

The municipal model would cost about $5 million a year, funded by customers who use it. It would also require a $6.7 million bond to build a new facility for vehicles and equipment.

"There is something to be said for the long-term ability to control costs by running the entity ourselves." City Council President Max Tracy tweet this

Hybrid model advocates say residents can't afford more debt when the school district is considering asking voters to fund a new high school. The school and city have just over $100 million in shared debt capacity in the coming years, and more borrowing will be needed to finance the project.

"The idea of a capital bond at this time — I don't see how that alone is something that the city can consider right now," Councilor Joan Shannon (D-South District) said at a recent meeting. "What I'm hearing from constituents is concerns about adding to the cost of municipal services. Whether renters or homeowners, everybody is feeling taxed."

Indeed, the proposal is coming just as many taxpayers are receiving drastically higher property tax bills due to the recent citywide reassessment, the first since 2005. Home values have skyrocketed as demand for housing in the Queen City has outpaced supply.

Councilor Sarah Carpenter (D-Ward 4) said she doesn't think the cost of municipal pickup is justifiable when the hybrid model could achieve the same goals.

"We're a small city, and creating a whole department to do this is a big effort," she said. "There may be some pros to doing it that way, but we have a hauler system in place. I believe we've got willing bidders, so let's play that out."

Councilor Mark Barlow (I-North District) is wary of how either option could affect small businesses. Compost haulers could be cut out of the market if the city or a commercial operation picked up everyone's food scraps.

"This is an existential decision we're making for a company," Barlow said.

Maryam Muhammad, co-owner of Colchester-based 802 Compost Services, said she stands to lose half of her customer base if Burlington consolidates waste collection. She said she'd have to expand to other communities to make up for lost revenue, which would make for longer trips and cost more in gas.

"It would definitely hurt our business," Muhammad said.

Larger haulers are also concerned. Joe Sinagra, sustainability director for Myers Container Service, worries that such a system would attract national hauling giants, such as Waste Management, to Vermont, where they could outbid "even Casella," he said, referring to the state's largest hauler.

"If you want one hauler to do it all, there's only a handful of companies that [can]," Sinagra said. "It kinda goes against what Burlington is all about."

Sinagra is also dubious that a hybrid model would substantially decrease truck traffic. Another company may win a bid for residences, Sinagra said, but Myers would still serve its commercial clients, which are exempt from the consolidation proposal. Additionally, large apartment complexes of more than four units could still use whichever hauler the owners chose.

As for municipal collection? Sinagra said Burlington should leave it to the pros.

Progressive councilors disagree. City Council President Max Tracy (P-Ward 2) said eliminating private haulers would greatly reduce the number of noisy, smelly trucks on city streets. He said Burlingtonians would have more control over a public waste collection system and likened the arrangement to the city's operation of its electric department, which just increased its rates for the first time in 12 years.

The Burlington Electric Department puts "ratepayer interest ahead of creating profits ... because it's not a for-profit, private company; it's a public utility," Tracy said. "There is something to be said for the long-term ability to control costs by running the entity ourselves."

Tracy said voters would decide whether it is fiscally prudent to adopt the plan. Hanson, Tracy's Progressive colleague, said he needs more information "about what it could mean" for the city's borrowing capacity.

Both councilors said they support the municipal model because the city would hire 14 more workers, all backed by a union. The hybrid option proposes three additional recycling collectors to bolster the city's program, all of whom would be unionized, plus one person to oversee the contracts with private haulers.

At a recent council meeting, Mayor Weinberger warned the Progs not to undo the spirit of "collaboration that has marked this discussion until now." But it's unclear whether the Progs will even have the votes to carry the municipal option forward.

The caucus has been down a member since late May, when former Ward 3 councilor Brian Pine left for a job in Weinberger's administration, dropping the party's membership on the 12-person council to five. One of those members, Councilor Zoraya Hightower (P-Ward 1), is traveling and will likely miss the August 9 vote, meaning Progs would need at least two other votes to pass a resolution.

Barlow has said he won't support the municipal option, and Shannon has expressed skepticism of it, but other councilors aren't showing their cards. Besides Carpenter, none of the three other council Democrats responded to interview requests, nor did independent Ali Dieng (Ward 7).

Candidates running for the open Ward 3 seat have each taken their party's line on the issue. Prog candidate Joe Magee prefers the municipal plan, and Democrat-endorsed Owen Milne likes the hybrid. Republican Christopher-Aaron Felker opposes the municipal model but would not provide a clear answer on whether he'd support a hybrid system.

Hogan, the public works commissioner, prefers the hybrid option. But after years of watching too many trucks traverse his street, it matters less to him which option councilors choose.

"Consolidation, however we do it, is an exciting prospect," he said.