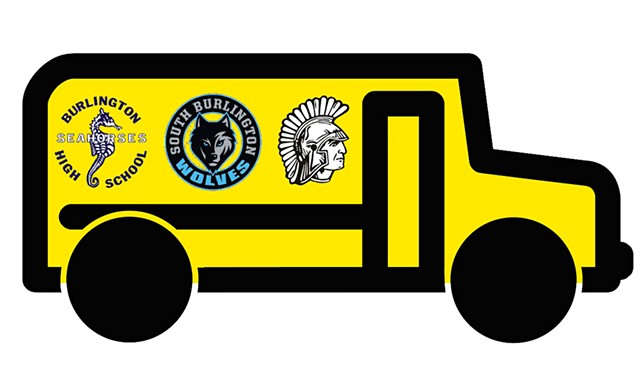 Three cities, three school districts and $305 million. That's the rough combined price tag for approved or proposed big-ticket school construction projects in Burlington, South Burlington and Winooski — at sites that are within a five-mile radius.

The giant tab and small distance between the campuses raises an obvious question: Should the three most urban communities in Chittenden County be talking about school consolidation?

Merging districts is not a popular idea in Vermont, which loves all things local, though it has come up in the three communities before — and mostly gone nowhere. Longtime Burlington School Board member Keith Pillsbury, who has served intermittently since the late 1980s, remembers Burlington and Winooski school administrators chatting informally about consolidation scenarios 30 years ago. There were later conversations, too, and a study by Winooski in 2014.

So far, history suggests the answer is no. And because Chittenden County, the state's most populous region, has generally avoided the plummeting school enrollment that has pushed district mergers under the state law known as Act 46, there has been less pressure from the state to merge districts or schools. But the scale of local school construction, and the associated property tax increases — yes, those — are strong reminders that operating separate districts is not cheap, even in an area where enrollment is more or less stable.

Creating one unified high school would almost certainly save money on administrative and teaching staff, construction, and maintenance costs. Based on current enrollment in the three cities, the school would serve about 2,115 students. That would be the largest high school in Vermont by far — but certainly not unheard of in New England. The most populous in neighboring New Hampshire, Pinkerton Academy, has about 3,100 students.

Building a local appetite for a school of that scale could require a major cultural shift, as would sharing governance. Decisions about which city would host the school, how bus routes would be funded, and even what mascot to choose could be obstacles, along with entrenched localism. Chittenden County voters rejected a proposed countywide tech high school some years back, for example. And the 2014 study Winooski conducted to consider consolidation actually recommended against it.

"The citizens of Winooski who currently have access to school governance and are proud of the accomplishment of their students would be consumed into a much larger system that already has its own governance, culture and rules," the document reads. "Winooski City is working to maintain and extend its culture as a city. Losing school governance would be a step backward."

Five years later, a construction spree is looming. It began in Burlington, one of the few communities in Vermont to maintain a walkable, neighborhood school system. That system comprises many buildings: six elementary schools, two middle schools and one high school, serving a total student population of approximately 3,870 — 980 of whom attend the high school.

Last November, Queen City voters approved a $70 million rebuild of the circa-1964 Burlington High School by a whopping 73 percent approval margin. Why so resounding? Perhaps because the sloping connector ramps to the hillside building's various wings, which seemed so modern back in the day, are a heating nightmare and problematic for anyone in a wheelchair, on crutches or just trying to get to class on time. Can't get there from here? That's BHS.

Winooski followed suit in March, when voters approved by 22 votes a $57.8 million makeover of its K through 12 school complex on Normand Street, which has sections dating back to the late 1950s. Supporters pointed out, correctly, that the school building was a little like an old Vermont farmhouse with various additions that made sense at the time but don't add up in 2019.

Now South Burlington may outdo both of its neighbors.

In June, the school board voted to push forward a construction plan with a price tag of $173 million to $178 million, with the intention of seeking voter approval on Town Meeting Day in March 2020.

The proposal calls for a new middle school and a new high school to replace the current version of each on the shared campus at 500 Dorset Street. The existing high school, which opened in 1961, and middle school, built in 1967, would be demolished.

School buildings from the 1960s don't have droves of champions who want to preserve the sad blank exterior walls and narrow, windowless hallways. Still, some South Burlington residents have already registered sticker shock at the prospect of replacing not one but two buildings. The discussion has gotten heated on the popular SB VT Community Watch Facebook page and the local Front Porch Forum.

It's understandable that some residents are cautious given the expense, Burkhardt said. And despite the fact that renovations have been discussed for years, the current proposal — and its eye-popping price tag — is relatively new. She cautions that the plan could change significantly depending on the reactions at public meetings this fall. The cost could go down if residents push for a smaller project, or it could actually go up. There's a movement to add an indoor track that isn't included in the current price estimates, Burkhardt explained. The estimated tax impact of the proposal hasn't been finalized but is expected in the fall, she added.

Despite all the moving parts, Burkhardt said she's been pleasantly surprised by the number of people who have approached her to say, "The high school needs to be done ... We're behind you 100 percent."

The suburban high school's enrollment has crept up slightly since 2012 to a total of 921, including 170 students from the Champlain Islands, who have no public high school and attend with school vouchers. Including those kids, a district forecast estimated the enrollment would increase to 1,045 in 2028. Brisk housing construction in South Burlington is a factor in the projected uptick.

The enrollment scenario is not dramatically different in Burlington and Winooski, where student numbers are mostly steady, with some fluctuations. The current crop of renovations seems less about capacity than about the sense that the buildings' designs are outdated. Terminally outdated.

Former Vermont education secretary Rebecca Holcombe, now a Democratic candidate for governor, said it's not surprising to see renovation plans emerging, especially where enrollment is solid. She was serving as secretary in 2015 when Act 46, a controversial law that some communities are still fighting today, went into effect.

"Many systems are trying to position themselves to be attractive" to families and students, Holcombe said. And new school architecture emphasizes designs that mesh with 21st-century education concepts: small group learning, natural light and good access to technology — not to mention providing updated HVAC systems and new roofs. "It's not just that they are pretty," Holcombe said. "They also work; they don't leak."

She said she was unfamiliar with the specifics of the Chittenden County school construction proposals and couldn't comment on them. But it's always worthwhile for districts to look at working together, even in modest ways, because it can lead to better relationships, Holcombe said.

There's no current push in any of the three cities for a merger, even in Winooski, where just 210 students attend the high school. Winooski School Board chair Mike Decarreau, a strong supporter of the makeover, remembers past conversations with Burlington about consolidation, but recalls concluding, "It was not worthwhile."

"It's an interesting question," Burkhardt, the South Burlington School Board member, said. "It's not a question we've really discussed as a board. We certainly, as we are thinking about our own project, have tried to see where we can be flexible in design to make sure that we're not boxing ourselves in."

She added, in a reference to dropping enrollment in many towns: "We know what the statewide trends look like."

But, Burkhardt continued, "[We] are very different cities with very different visions, I think. So that would have to be a pretty deep conversation to get into."

Burkhardt noted that before South Burlington built its own high school in 1961, many of its students went to Burlington. Some longtime residents still remember how the opening of the high school almost 60 years ago epitomized the growth and individuality of South Burlington, which broke away from Burlington in 1865.

That independent streak is also felt in Winooski, a city that was once part of Colchester. "I don't always think big is better," said Hal Colston, a Winooski city councilor, Democratic state legislator, and former director of a now-retired grant-funded school innovation project called the Partnership for Change that focused on Winooski and Burlington.

Colston supports Winooski's individual makeover, though he admits that the looming school investments in the three towns raise interesting questions. He likened a merger to homeowners who live on the same street and say, "Maybe we could share the lawn mowers and I won't have to lay out all the capital.

"But it seems we don't naturally go there," he said. "We just want to have our own."

The original print version of this article was headlined "Independent Thinking | Burlington, SoBu and Winooski are planning massive school projects. Should they consolidate instead?"