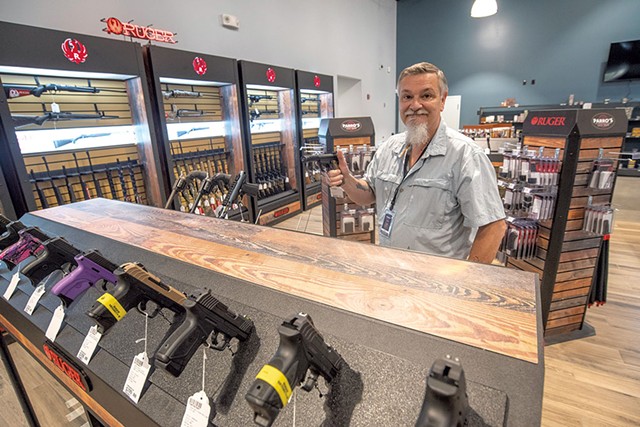 I'm not a gun guy. I haven't handled a firearm since I squeezed off a few rounds from an old .22 rifle at summer camp more than 35 years ago.

Nor have I felt the impulse to own a gun for personal protection, whether due to privilege or delusion or both. I've also figured, rightly or wrongly, that owning a gun — statistically speaking — would tend to make my family's home less safe, not more.

So when Henry Parro opened the state's first indoor shooting range in Waterbury in late June, I didn't pay it much mind.

Then one novel feature caught my attention: firearms for rent. I've rented cars and skis and stand-up paddleboards — even a snowmobile once — but I'd never heard of a place where you could walk in, plunk down a credit card and minutes later be firing an assault rifle.

That is, however, exactly what I found myself doing one morning last week.

If Parro's grand business plans hit the mark, gun enthusiasts from around the region will soon be descending on Waterbury as well.

"We've designed this to be a destination," Parro said from a balcony high above the shop's expansive retail floor. "We're going to be drawing people from all over the Northeast. We already are."

A wedding party from Brooklyn recently swung by on a lark to use the range, while a group of law enforcement officers from across the Northeast attended a training session put on by a major gun manufacturer, Parro said.

Most of those I met, however, were locals, including Barbara Walton of Waterbury, who toured the store with her 16-year-old grandson as she looked to sign him up for shooting classes. "I want a small gun for myself, too," she said.

Parro, a former member of the Vermont National Guard and ex-police officer in South Burlington and Waterbury, has run a gun shop catering to sporting enthusiasts and law enforcement officers on Route 2 in Waterbury for nearly 40 years.

He first learned about gun safety as a kid hunting with his father, back when the frigid first day of deer season was "like a state holiday," he said. As interest in hunting has waned and more people have moved to Vermont from other states, Parro has found that his customers are looking not just to buy guns but also for a convenient place to learn to use them safely and effectively.

"I'd tell them that there were no indoor ranges in Vermont, and they just couldn't believe it," he said. 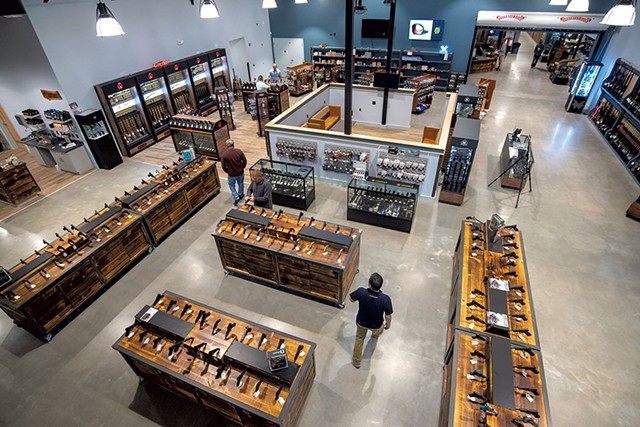 There are gun clubs and shooting ranges around the state, but all are outdoors and typically require memberships. It's also legal in most rural towns to fire guns "from your back porch," Parro said, which could explain the absence of indoor ranges until now.

The environmental contamination that can occur from pumping so much lead into the ground, not to mention the dangers of unregulated outdoor shooting, all help explain the shift toward indoor shooting ranges, he said.

Parro began getting serious about bringing a combined retail shop and indoor range to Waterbury in 2016. He visited several facilities around the country, including one in Utah that impressed him called Ready Gunner.

He bought land along the Winooski River just a quarter-mile from his former shop. He convinced his suppliers, such as Connecticut-based gunmaker Ruger, to commit to a larger presence in the new store. He hired local architect Joe Greene to design the building and shepherd it through the permit process.

And after a successful soft opening in July, Parro says he's bracing himself for a robust grand opening this week.

During one of my visits to the shop in late July, James Roy browsed the firearm selection with his 10- and 12-year-old sons to see about replacing their little Crickett .22 rifle with something more powerful.

"I'm fully supportive of everything he's doing here," said Roy, who owns a pizzeria in town. "It's gutsy." Anything that brings in more visitors and revenue — something the town's brew pubs and Ben & Jerry's factory do a decent job of already — can only help businesses like his, Roy said.

Parro said he hopes his airy, open retail space, hands-on displays and try-before-you-buy opportunities will break through the fear factor surrounding guns, much of which he said is manufactured by the media.

He likened his sales approach to the way electronics retailers display cellphones on top of the counter instead of behind it, allowing customers to fiddle with the latest phones to become comfortable with their features.

"I said, 'Why couldn't we do that with handguns?'" he said. "Now we've got possibly 200 handguns on display that people can touch and interact with."

The main part of the store is laid out with pistols in the center, dozens of long rifles neatly lined up along the walls, and all manner of ammunition, holsters, targets, scopes and other gear in between.

The visitors — and the volleys of gunfire — seemed to come in waves. The store filled with shoppers around lunchtime and after 5 p.m. Long quiet stretches were broken by occasional bursts of muffled gunfire.

One nook carried familiar local products including maple syrup, honey and Darn Tough socks. Apparel from Utah-based Black Rifle Coffee Company provided somewhat more provocative products, such as a baseball cap sporting an American flag struck through with a blue line, an image some see as supportive of law enforcement.

Salesman Mike Morin of Troy said the wide range of guns and gear available was intentional.

"We're trying to appeal to pretty much everybody," he said.

A pink .22-caliber rifle made just for kids, selling for $169, caught my eye. In a nearby case, a Derringer-style pistol tiny enough to fit in a purse cost just $159. Beside it, a Ruger 338 Lapua, effectively a civilian version of a long-range military sniper rifle, was mounted on a stout tripod — yours for just $2,000. Other specialty rifles went for double that.

Some days Morin sells just a couple of guns, other days seven or eight. Last year's sharp rise in gun sales nationally seemed to be a reaction to the riots that convulsed the nation following the murder of George Floyd, he said. "The world kind of went crazy there for a little bit," Morin said.

All those new gun owners just reinforce Parro's contention that the time is right for a firearms business that combines retail, rentals and a safety-focused indoor shooting range.

To experience the offerings of this temple to the Second Amendment, I paid for a lane for an hour ($18). I rented a Ruger 9mm pistol and a high-powered, semiautomatic AR-15-style rifle made by a company called Heckler & Koch ($35 each). (Parro and his staff reject the term "assault rifle" as inflammatory and imprecise and, in all cases, prefer the term "firearm" to "weapon.") I also picked up 100 rounds of ammo ($25 for 50 pistol rounds and $59 for 50 rifle rounds) and chose the standard six-bullseye target ($1.99) over the zombie or the gun-wielding bad guy daring me to shoot him in various highlighted organs.

Inside one of the 10 available lanes, I stapled my target to the carrier, then tapped a touch screen that could send the target sliding out up to 25 yards. I started with five yards.

Noble showed me how to load the 9mm bullets into the magazine, shove the magazine into the grip, slide back the surprisingly stiff bolt, release the safety and prepare to fire. I lined up the sights as best I could, gently squeezed the trigger and — BAM!

I missed. A tiny hole appeared wide of the target. Even from that short distance, I found it surprisingly challenging to keep the sights centered on the bullseye. Round after round, magazine after magazine, however, I slowly improved my accuracy.

Once, having lost count of how many bullets were in the magazine, I put the pistol down with a live round in the chamber. Noble quickly spotted my error and cleared the chamber; the unfired bullet dropped to the floor where it fell into a grated collection channel.

That's exactly how many firearms accidents happen, Noble said: when even experienced shooters don't make sure the chamber is empty when cleaning or re-holstering their pistols.

While the pistol was manageable, even comfortable to hold and fire, the rifle was a different beast altogether. Everything about it — its weight, tactical scope and overall lethality — was downright intimidating.

The fact that the first magazine refused to click into place didn't help either, further unnerving me. What if I just broke a $3,500 rifle? A fresh magazine worked just fine, though, and after loading it, I sent the target out to 15 yards.

When ready, I lined up the target in the cross hairs, pulled the stock onto my shoulder, squeezed the trigger and — BA-BOOM!!!!! 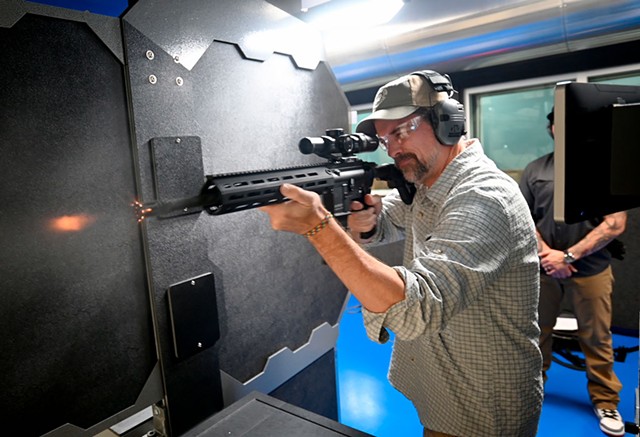 It is difficult to describe the impact — physical and personal — of that first shot. It felt like a meteor had struck the earth in front of me. A deep shock wave coursed through my body, the recoil rippling through my arms and right shoulder with astounding power. Being that close to an explosion of such magnitude — controlled and focused as it was — rattled me.

I composed myself and continued to fire round after concussive round, the puffs of acrid gunpowder smoke carried downrange by a powerful ventilation system. My accuracy gradually improved until it became easier to hit the target with the rifle from 25 yards than with the pistol from five.

It was exhilarating, but I never got comfortable firing it. I'm not sure what scared me more — the power of that weapon or the fact that I could have taken one home that day.

The original print version of this article was headlined "Shots Fired"