Shot Strategy: Vermont Takes Vaccines to Church, the Streets and Even the Beach

Kristin Galipeau arrived at North Beach in Burlington last Thursday afternoon wearing a bathing suit and a rainbow face mask. She and her friends had only planned on a relaxing day at the lake.

"Then we were like, 'Oh, shit, we can get vaccinated here,'" she said.

Galipeau had stumbled upon a pop-up vaccination clinic, where Walgreens workers were administering doses of the Johnson & Johnson COVID-19 vaccine to anyone over the age of 18 — no appointment necessary. Pharmacy employees helped people fill out paperwork before shepherding them to a picnic table, where they were jabbed, Band-Aided and sent off to sit in a makeshift monitoring area.

As Galipeau made her way through, glimpses of post-pandemic life were all around. Unmasked beachgoers threw Frisbees and played beer pong at a plastic table in the shallows on the summery, 90-degree afternoon. A man sat in a beach chair in the shade and read from a Bill O'Reilly book. Another slugged a beer and told a story loudly, his skin turning pink under the sun. Jay-Z crackled from a speaker, while Jet Skis whined in the distance.

Beyond the occasional glance, no one paid much attention to the clinic, as if it were ordinary to find people getting vaccinated at the beach. Perhaps that was because, after the last year, "ordinary" has lost all meaning.

"I just want to go back to normal." Kristin Galipeau tweet this

Galipeau, 31, received her shot about 10 minutes before the clinic closed on Thursday. Afterward, she recalled how some of her friends were initially hesitant about getting vaccinated. She decided to get jabbed for one simple reason.

"I just want to go back to normal," Galipeau said.

Interviews with a dozen people at the two-day North Beach clinic last Thursday and Friday revealed a mix of motivations for getting vaccinated. Some wanted to protect themselves, while others cited pressure from family, friends or society. Some were excited; others, indifferent. But they shared the belief that their decision would help put the pandemic behind them.

"I've never really been worried too much about the virus," said Patrick Allard, 48, of Milton, after receiving his shot. "I'm a little bit more concerned about the vaccine. But it just seems like it's going to be easier moving forward."

Kevin McClory, 31, of Montpelier, had a similar take. "I was never really that scared of COVID, but my friends and family were hoping that I [got vaccinated] because they care about my well-being," he said. Getting the shot just felt like "the right thing to do."

Similar scenes are playing out across Vermont as the state with the nation's leading vaccination effort enters a critical phase. Last Friday, Gov. Phil Scott announced that he would lift all COVID-19 restrictions once 80 percent of eligible Vermonters had received at least one dose — which, at the time, placed the state about 28,000 first shots away from a full reopening. More than 10,000 people have been added to the tally since then, and the state will likely eclipse the threshold soon.

Vermont has had little trouble convincing people to get vaccinated so far. The state's number of shots administered held steady this month even as the rate dropped nearly 50 percent nationwide, following an April peak. But progress will inevitably slow in Vermont, too, as the number of unvaccinated people continues to shrink.

The state has shifted its strategy with this in mind. Rather than offer a few mass vaccination sites, it has started to make shots available in more convenient locations where foot traffic's aplenty. A walk-up clinic was held on Burlington's Church Street on Saturday evening, for example, while dozens more are being offered throughout Vermont in the coming weeks at schools, state parks and work sites. There's even one planned for the Thunder Road International Speedbowl in Barre.

Estimates about the number of Americans who need to get vaccinated to achieve herd immunity have varied widely throughout the pandemic. Experts now say it would require at least 80 percent of the country's entire population — not just of those who are eligible, as Scott has set for Vermont's reopening threshold.

Many experts now believe that the United States is unlikely to achieve herd immunity anytime soon — and perhaps never will. Instead, they say, the virus will linger as a manageable threat, still resulting in some hospitalizations and deaths.

Vermont officials have avoided emphasizing herd immunity given the uncertainty, encouraging people to instead focus on how the vaccine is improving things in the state. Daily infections, hospitalizations and deaths have plummeted after a prolonged winter surge.

Dr. Tim Lahey, an infectious disease specialist at the University of Vermont Medical Center, said the state will need to reach out to two main groups: those who have opted not to be vaccinated and those who have lacked the opportunity.

The former undoubtedly includes many who are vehemently opposed to the idea, because they either distrust vaccines or believe that the pandemic has been overblown. But Lahey was optimistic that most people can be won over.

Vermont has dabbled with incentives, announcing that the first 10,000 people who attended certain walk-in clinics last weekend would receive coupons for a free creemee. But officials are banking on trust, not ice cream, to convince the hesitant to get a shot. They have encouraged Vermonters to reach out to their loved ones and have suggested ways to combat disinformation.

Dr. Toby Sadkin, a physician at St. Albans Primary Care, said one of the first questions people are now asked at her office is whether they've received a shot. Those who haven't often cite safety concerns, prompting her to explain why she believes the vaccine is both safe and effective. "Most of those conversations go well," she said. "Most people either will think about it or will sign up for it."

Several have asked whether they can get the vaccine at the office that very day. They'll soon be able to: The state plans to begin sending doses of the Pfizer and Moderna vaccines to some primary care offices, including Sadkin's, recognizing that some people will be more open to receiving the shot from someone they know.

That thinking inspired a series of clinics for Black, Indigenous and people of color through a partnership between the state, the City of Burlington and the Vermont Health Equity Initiative, an organization seeking to address racial health disparities. Held at Burlington's Cathedral Church of St. Paul each of the last 10 Saturdays, the clinics have provided a welcoming atmosphere far different from the sterilized environment of most medical settings, according to Luis Calderin, one of the initiative's organizers, who has led its marketing and outreach efforts.

Calderin, who is also a board member of the Vermont Professionals of Color Network, said he and his colleagues use their personal contacts to identify people who still need to be vaccinated and guide them through the process, providing transportation or translation services. Calderin himself greets people as they show up while "culturally relevant" music plays inside the church: salsa and hip-hop, for example — "not WIZN," he said, referring to the radio station whose tagline warns of "Classic Rock That Really Rocks."

"It has made people feel at ease about getting the shot because they trust us," Calderin said. "We know them. They are our family. They are our neighbors. We grew up together." More than 3,000 doses have been given so far. Calderin expects the clinics to continue through mid-July.

Walk-in events such as the one at North Beach, meanwhile, represent efforts to target people for whom work schedules or lack of transportation have been problems. Most who spoke to Seven Days at North Beach said they were there because of its convenience.

Andrew Nadeau, 59, of St. Albans, waited until the "rush was over" and chose to attend a walk-up clinic because he didn't want to deal with the online registration process. "I heard about this a couple days ago," he said with a shrug, "and here I am." 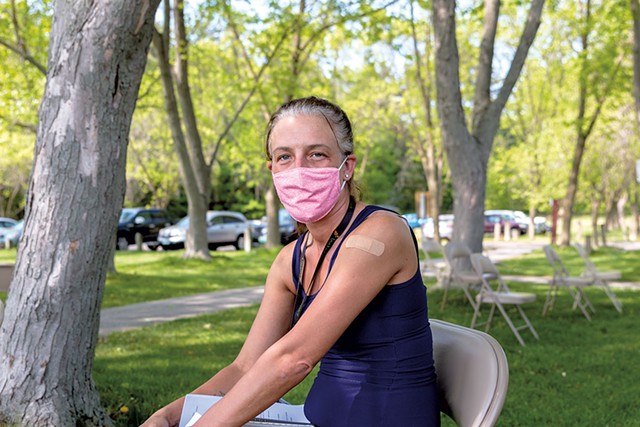 Holly Botala, 36, said she must be fully protected before she starts a new job as a dental assistant next month. The beachside clinic fit her time frame while offering a fun distraction for her 6-year-old son.

State officials say the walk-in clinics should solve most access issues. But not everyone is so sure. Steven Daggett, a 58-year-old disabled vet, said he and his brother had wanted to get vaccinated ever since moving to Island Pond in February. They were holding out for the Johnson & Johnson shot — "we don't like needles," Daggett explained — and had been unable to find a place nearby offering the one-and-done shot.

While the North Beach clinic worked for them, a five-hour round trip isn't an option for many others, Daggett noted. He hoped the state would better distribute the J&J vaccine to less populated areas, such as the Northeast Kingdom. "Up there, unless you wanted a double shot, you didn't get nothing," he said.

Questions of equity have also weighed heavily on Anne Sosin, a policy fellow at the Nelson A. Rockefeller Center at Dartmouth College who has been particularly focused on people ages 18 to 29. The North Beach clinic might seem tailor-made for this group, whose vaccination rates are lagging behind the broader population. But Sosin said national data show that many unvaccinated young people are in the workforce and lack the flexibility to attend a clinic on a Thursday or Friday afternoon.

The state recently began targeting tourism and hospitality workers with sector-specific clinics at restaurants, ski resorts and lodging facilities. It's also encouraging large companies to offer clinics for employees. More than two dozen businesses are partnering with the state on such efforts, including National Life, GlobalFoundries and the Edge.

There are, of course, people choosing not to get vaccinated yet. Scott has voiced frustration about this at recent press conferences, framing the decision to get a shot as an act of public service — one that pales in comparison to the sacrifices previous generations made during times of war. "I don't think it's too much to ask," he said last month.

But Sosin believes the state bears some blame. Young people were told for months that they face less serious complications from COVID-19 and could therefore afford to wait their turn, she said, while the state started lifting some restrictions before they could be fully vaccinated. "Saying, 'You're going to get a creemee' or 'You're going to get a beer' may just not be particularly motivating now," she said of offering incentives for getting a shot.

Lahey, the UVM epidemiologist, said much of it boils down to altruism.

"How do community leaders help people understand that part of being a good neighbor is getting a shot?" he said. "That's much harder messaging than, 'This thing could protect you from death.' But we need to do it."

The original print version of this article was headlined "Shot Strategy | Vermont takes vaccines to church, the streets and even the beach"