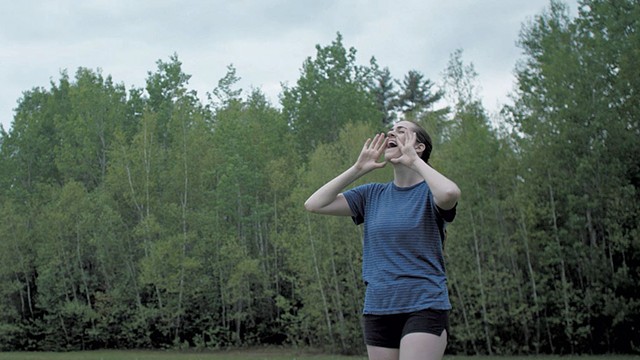 Our streaming entertainment options are overwhelming — and not always easy to sort through. This week, I watched a possible first in cinema history: an indie film shot in rural Vermont that is not remotely soothing, healing or pastoral.

Silence & Darkness is the feature debut of New York-based director Barak Barkan, who shot it over three weeks in Waitsfield and Warren. Locals may recognize locations, such as the Big Picture Theater & Café, and two cast members: musician Ariel Zevon and Sandra Gartner of Vermont Actors' Repertory Theater. Barkan told me in an email that "The entire Mad River Valley community ... supported the film."

Silence & Darkness is available to rent or buy on various streaming services, including iTunes, Google Play and Amazon Prime Video.

Two sisters — perhaps teens, perhaps older — live in a house in the woods with their Father (Jordan Lage). Anna (Mina Walker) is blind; Beth (Joan Glackin) is deaf. They communicate in a sign language of their own apparent devising that relies on touch, their hands frequently entwined.

While the sisters cooperate to perform daily tasks, each has her own passions: Anna loves music; Beth, gymnastics. What they don't have is any sort of life outside the sphere of Father, a doctor who lectures them (and anyone who will listen) on the dangers of germs. At night, Father drugs his daughters. Why? We aren't told. We may not want to know.

But the girls are starting to doubt the wisdom of Father. A visit from a neighbor inspires Anna to wonder what really happened to their mother, putting the members of this strange household on a collision course.

A movie about people who rely on one sense in default of another, Silence & Darkness makes us ultra-conscious of our own sensory input or lack thereof. If someone set out to prove that you can make an intensely unsettling film without any of the usual horror-movie manipulations of sight and sound — no shocking visions, no loud jump scares, not even a musical score — this might be the result. Barkan uses the eerie beauty of springtime in rural Vermont as a blank slate on which he encourages us to draw untold horrors — with our imaginations.

In lengthy shot after lengthy shot, often from a distance, we watch the sisters go through their daily routines: playing records, doing cartwheels, cooking, setting the table. Much of their dialogue is silent; we can only guess at the meaning of glances and interwoven hands. These scenes can be alienating, tempting us to tune out. But the sense that something is not right in this scenario — very not right — keeps pulling us back in.

Because Barkan leaves so much to the viewer's imagination, reactions to Silence & Darkness may depend on how dark our imaginations are. Mine is dark, and I was queasy. Still, I wish Barkan (who wrote as well as directed) had spun out the threads of mystery or delved deeper into the story's implications.

Thematically, it's impossible not to compare Silence & Darkness with the Greek cult film Dogtooth, which goes further in exploring the absurdist potential of a simple premise: What happens when parents intentionally create an alternate reality for their children? In this movie, the same premise is more sketched than fleshed out, with many questions about the family unit's functioning left unanswered.

While Silence & Darkness doesn't quite click as a story, it's a unique and powerful experience because of Barkan's commitment to the formal minimalism implied by the title, letting the background trilling of insects and the two lead actors' connection do the work. It's also an anomaly in the annals of Green Mountain film; you may never look at a greening Vermont landscape the same way again.

Dogtooth (2009; Kanopy, Tubi, Mubi, rentable): Before Greek director Yorgos Lanthimos courted awards attention with The Favourite, he made this intensely messed-up movie about teenage siblings who live in a fake world of their parents' creation.

Room (2015; Showtime, rentable): Though the sisters in Silence & Darkness have a certain amount of free range, I couldn't stop thinking of claustrophobic movies like this one, in which Brie Larson plays an abductee raising her child in captivity.

Goodnight Mommy (2014; Tubi, Pluto TV, rentable): Two brothers and their mother enjoy the isolation of the picturesque Austrian countryside, until the boys start to suspect that Mommy may not actually be Mommy. Like Silence & Darkness, this horror film uses the seemingly benign rhythms of country living to get under your skin.

The original print version of this article was headlined "Silence & Darkness"