Shot in Vermont, 'Best Summer Ever' Is a Joyous Teen Musical 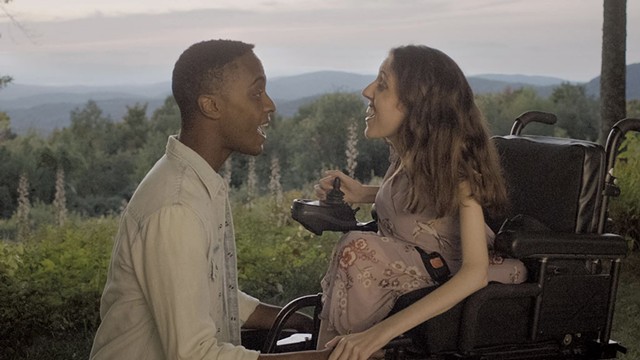 Our streaming entertainment options are overwhelming — and not always easy to sort through. Lately, everybody's been talking about Best Summer Ever, a musical that was produced and shot in Vermont by Zeno Mountain Farm, a Lincoln nonprofit that runs retreats and camps for people with and without disabilities.

Directed by Michael Parks Randa and Lauren Smitelli, the movie features Hollywood talent in front of and behind the camera. Maggie Gyllenhaal and Peter Sarsgaard, who have a home in Vermont, show up in cameos as TV journalists and count among several celebrity executive producers.

Cast and crew members are a mix of pros and non-pros; more than half of them have a disability. Best Summer Ever drew big buzz at South by Southwest in March, and a recent Variety article suggests that it "Serves as Template for Disability Representation in Hollywood." It's rentable on various platforms.

At a dance camp in Vermont, teens Sage (Shannon DeVido) and Tony (Rickey Alexander Wilson) meet and discover the joys of summer lovin'. But when autumn comes, both must return to their real lives, about which they haven't been entirely frank with each other.

Tony, who presented himself as a New York dance kid, is actually a football hero in a small Pennsylvania town that depends on him to break its homecoming game losing streak. Sage travels the nation in an Airstream with her free-spirited moms, who are itinerant pot growers staying one step ahead of the law.

Then a breakdown strands Sage in — you guessed it — Tony's town. Dreaming of a "normal" life, she persuades her moms to let her enroll in school (that's Bristol's Mount Abraham Union High School on-screen). When the two lovers reunite, worlds collide, cheerleaders fume and dance numbers take over whole streets. These kids are footloose and fancy-free, and love will lift them up where they belong.

Best Summer Ever isn't trying to push the boundaries of its genre. Dripping with golden light and bursting with candy colors, it's a love letter to the feel-good teen musicals of the 1980s and beyond. Even if those aren't your jam, it's impossible not to like a movie with such a big helping of joy and so little cynicism.

DeVido and Wilson, both pro actors, anchor the story with their winsome chemistry. Tony and Sage may not be the most complex characters, but her singing voice and his dance moves make them soar. Emily Kranking has irrepressible energy as cheerleader Nancy. Another standout is MuMu, who cowrote many of the songs and plays Nancy's evil counterpart, a queen bee who regards Tony as her rightful property. She does her scheming in a deliciously vampy number called "The G."

The songs are hummable, and the well-choreographed ensemble numbers are downright exhilarating. "More Than Worth the Wait" is a riff on Grease's "Summer Nights" that isn't afraid to make a sly nod to its inspiration. DeVido gets to show her vocal chops in the ballad "Leave Behind." And the film's high point could be "Ready to Ride," in which downtown Bristol becomes the scene of a La La Land-style street ballet.

If you're wondering where disability is in this movie — there's nothing hidden about it. DeVido uses a wheelchair. Kranking has hemiplegic cerebral palsy and dysarthria, according to her bio. Supporting characters with visible disabilities — a cop, a mechanic — blend with apparently nondisabled ones. (Disability can, of course, also be invisible.) But no one's disability is commented on, because that's not what the story is about.

Zeno Mountain Farm codirector Will Halby told Variety that, by integrating actors of various ability levels, the filmmakers aimed to break out of the Hollywood pattern of presenting disabilities as obstacles to overcome and disabled people as sources of inspiration for abled people.

"We beg the question," Halby said, "'why is it not more normal, not just on film, but in the world, in general, to see this level of integration in our day to day lives?'"

It's a good question and a reminder of the power of casting decisions and other artistic choices to shape our sense of what's possible in the world. A pure shot of fun and optimism, Best Summer Ever is just as radical as it is conventional, because it makes us ask ourselves why we haven't been seeing characters like these in movie musicals all along. Everybody deserves a chance to sing their heart out.

Crip Camp: A Disability Revolution (2020; Netflix): Nominated for an Oscar, this acclaimed doc spotlights New York's Camp Jened, a summer camp with a countercultural flavor that nurtured many future activists for disability rights, including the film's codirector, James Lebrecht.

Sam & Mattie Make a Zombie Movie (2021; rentable): This documentary follows the adventures of "two badass best friends with Down syndrome" who produce a zombie flick.