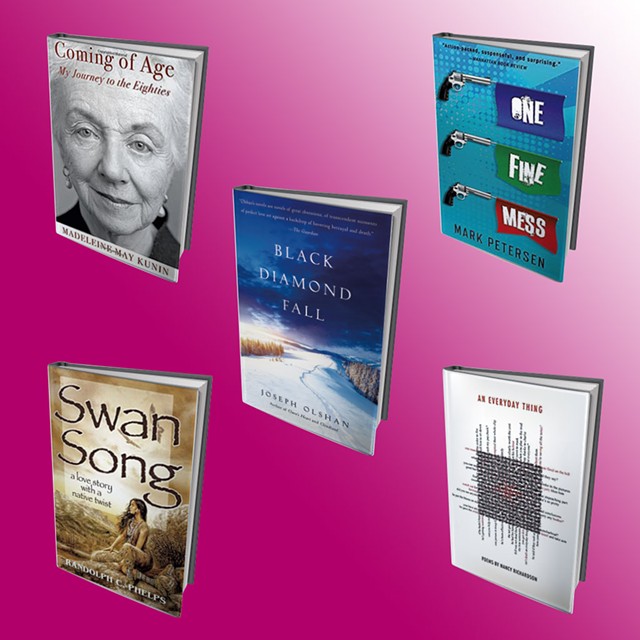 Seven Days writers can't possibly read, much less review, all the books that arrive in a steady stream by post, email and, in one memorable case, a skein of loudly honking geese. So this monthly feature is our way of introducing you to a handful of books by Vermont authors. To do that, we contextualize each book just a little and quote a single representative sentence from, yes, page 32.

Coming of Age: My Journey to the Eighties

One never knows / which way it will come down. / We have no plans that / have to be changed.

Vermont's first — and still only — female governor, Madeleine Kunin, was elected in 1984.* The arc of her career has been formidable; she was reelected three times (the only woman in the U.S. to achieve that feat) and went on to serve as U.S. deputy secretary of education under president Bill Clinton, then as U.S. ambassador to Switzerland.

Yet this autobiographical volume, which Kunin calls a "coming-into-old-age memoir," is soft in all the ways that reciting credentials is not. A mixture of smooth, essayistic prose and poetry, Coming of Age is a tender and lucid reflection on what it means to grow older and slow down as a woman who has always been moving.

As Kunin, now 85, notes in her foreword, "I ... find that I can write differently now than when I was involved in politics. Now my skin has become more translucent. I can be more personal." And she does relate personal stories, with subjects ranging from falling in love in her seventies to a relationship with the color red that blossomed when she turned 80.

In the wake of Brett Kavanaugh's Senate Judiciary Committee hearing, Kunin's dignified and intimate form of storytelling hits especially hard. In "Finding a Seat," she elegantly combines complaints about the women's bathroom line at the Flynn Center for the Performing Arts with a sharp memory of crying in a stall after being mocked by male members of the Joint Fiscal Committee. It's evidence of her brilliance that she can cover matrilineal regimens of seat wiping, a meditation on gendered spatial politics and a triumphant message about women's advancement in politics in just a few pages.

Kunin will discuss and sign the book on Tuesday, October 23, 7 p.m., at the Vermont Book Shop in Middlebury.

It brings him back to a lazy afternoon several months after the tsunami struck Japan, he and Luc sprawled over each other watching the Women's World Cup.

Two real-life events inspired Joseph Olshan's 10th novel: the disappearance of a student at Middlebury College and vandalism at the nearby Robert Frost Farm. But the details deviate considerably. Olshan, whose book Clara's Heart was adapted into a 1988 film starring Whoopi Goldberg and Neil Patrick Harris, has turned out a mystery that is also a story about love and loss.

Young Luc Flanders was last seen after a pond-hockey game with friends. The suspicion of foul play drives an investigation, and a pair of detectives thinks Luc's ex-lover — the much older Sam Solomon — might be involved. Meantime, a parallel narrative looks back, through Sam's sorrowful reminiscences, at the hidden affair: Luc was not publicly "out." And other factors are at play, including Luc's head injury from a sports accident; a jilted, possibly vengeful, girlfriend; and bodybuilder twins, aggressive from testosterone use, whose father once worked for Frost.

While Olshan's character development enriches the novel, its most dramatic event is Sam's bone-breaking plunge down a dangerous ski trail in Utah — Black Diamond Fall. This will be the ultimate setting for Luc's anticlimactic fate.

Jules and her man squatted over Eddie's blimpy body in separate photos.

In this comic crime novel from Mark Petersen, a pistol-packing ex-stripper and her gambling addict boyfriend discover that murder isn't for amateurs. Or is it? When the story opens, spitfire Jules and her weak-willed swain, Wesley, have already dispatched the former's abusive husband, a "gunrunner and drug-slinger" whom no one's going to miss much.

Luckily for the pair, the detective on the case is more interested in watching their sexual escapades through a zoom lens than in putting them in cuffs. "Why didn't they post a video of their crime on YouTube?" he wonders, after discovering the selfies the killers took with the corpse. "Maybe they'd assembled a murder scrapbook too?" But if their foolish missteps don't take them down, Wesley's little betting habit just might.

While Petersen's novel isn't long on plausibility, it is a fast-paced, madcap, often funny ride, featuring characters such as a baby-dandling mobster nicknamed Half-Assed Frank (don't ask). In the real world, the author writes, he's a counselor who "help[s] fight opioid addiction." In this novel, he's happy to prove there's also a place for escapist entertainment.

Swan Song: A Love Story with a Native Twist

At that moment, it strikes me: Swan Song is my prior wife, Wicahpi Ska, and my native brother-by-blood came back as My Native Brother in this life.

Jeezum crow, is this a special artifact — and it's hard to know where to start. To use broad strokes, Swan Song is, indeed, a love story: A modern-day fellow with a strong propensity for past-life regression meets a woman on the internet. Her name is Pandora, she likes yoga, and it turns out she is the man's partner (Swan Song!) from their past lives as members of an unspecific Native American tribe.

Randolph C. Phelps claims in his author's preface that the story is not fiction — in fact, the entire book is excerpted from his autobiography, Ten Minutes, Ten Days, Ten Years: Finding the Grace of God. It's probably also worth noting that Swan Song is self-published under Cristo Morpho (that's Latin for "Christ transforms"), Phelps' spiritually oriented, Vermont-based nonprofit and Costa Rican intentional community. Christ certainly shows up in a big way in Swan Song for a book about Native Americans that's not about colonization.

Generally, it's hard not to recoil at Phelps' reckless romanticizing, not to mention appropriation, of both indigenous histories and present-day realities. With Papyrus-font chapter titles like "Available and Unattached," "The Buildup to the Showdown" and "Sacrum Meltdown II," Swan Song is a bumpy ride — proceed at your own peril.

Hearing of a friend's son

off a black silk rope

into a gully, perhaps

for some small animal

into a downward spin...

The remarkable thing about a car crash is how unremarkable it is, particularly in contrast to its power to alter a life. Collisions happen quickly, with cold, brutal efficiency: the screech of tires, the crush of twisting metal. Then, silence. At certain moments in her collection An Everyday Thing, Nancy Richardson's poetry hits with similarly jarring force. Her unadorned verse is succinct and plainspoken, an apt reflection of the everyday observations she deploys in contemplation of larger complexities.

The book's poems are centrally concerned with the Charlotte poet's upbringing in the declining rust belt of the 1960s, the Kent State University shootings of 1970 and the lasting impact of both on her. Those echoes of the past — the personal effects of dysfunction, disillusionment and senseless gun violence — reverberate loudly today. But what's most chilling, especially under Richardson's steady gaze, is just how easily the extraordinary can be made to feel ordinary.

*Correction, October 5, 2018: An earlier version of this story misstated how Madeleine Kunin became governor in 1984. She was elected, not appointed.