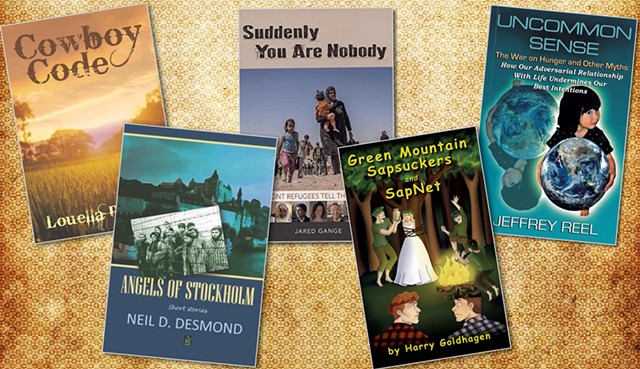 Seven Days writers can't possibly read, much less review, all the books that arrive in a steady stream by post, email and, in one memorable case, a siege of herons. So this monthly feature is our way of introducing you to a handful of books by Vermont authors. To do that, we contextualize each book just a little and quote a single representative sentence from, yes, page 32.

My mother inherited the ability to conjure spirits, the same talent that threads back through her foremothers.

Like most teenagers, 14-year-old Bobbie Grey is bewildered by the world of adults. Growing up in the American South shortly after World War II, she turns for guidance to her idol, movie star Gene Autry, and his Cowboy Code. The Singing Cowboy's famous creed was something like a 10 Commandments for gunslingers — musical and otherwise — that preached a moralistic, clean-living and, crucially, tolerant lifestyle.

Those lofty ethics are put to the test in Louella Bryant's new novel, Cowboy Code, when Bobbie falls in love with a young black boxer who is suspected of burglary and subsequently targeted by the Ku Klux Klan — a group whose ranks include Bobbie's own grandfather. Though fictional, the Lincoln author's tale is based on her mother's experiences as a young widow in a Virginia mill town in the 1940s. With a keen sensitivity to the insecurities and angst of adolescence, Bryant crafts a compelling mid-20th-century yarn whose explorations of race, sexuality, womanhood and Southern culture resonate loudly in the modern era.

"But to answer your first question, the telegraph lines were severed in the explosion."

This collection of short stories by Neil D. Desmond takes readers from Pakistan to Nova Scotia to Baton Rouge, La., and from World War I to the present day. Many of them hinge on unlikely but fortuitous circumstances that bring people together. The story quoted here, "We May Be on Our Own," relates the true tale of how support workers from Massachusetts came to the aid of Halifax, N.S., after a maritime explosion devastated the city in 1917.

While some of the stories have overtly spiritual themes (fate, near-death experiences and the like), others simply emphasize the power of grace or charity in daily life. In the collection's title story, which won the publisher's Adelaide Voices Literary Award, a Stockholm bus driver uses his humble skills to help liberate an Austrian concentration camp. Decades later, he considers that perhaps those skills weren't so humble after all: "For the rest of his life, he had stepped up whenever responsibilities chose him ... Who could say how many people had taken his bus to a better life?"

Suddenly You Are Nobody: Vermont Refugees Tell Their Stories

"Since my husband is from a minority culture, and due [to] the cultural silence of his person, his voice was unheard and unrecognized."

Patrick Giantonio, a longtime advocate with the group Vermont Refugee Assistance, once pointed out to this reporter something that most Vermonters never realize. While the new Americans on the streets of Burlington or Rutland may be shy and quiet, he said, they're among the toughest survivors we'll ever encounter. Nearly all lost everything they owned and achieved, fleeing wars, famines, persecution and even torture to arrive in an unfamiliar land and start anew.

Jared Gange, a guidebook author and owner of Huntington Graphics, ordinarily produces outdoor and recreation titles about New England. Here, he offers readers a different means of travel: short but emotionally powerful profiles of 30 men and women from 17 countries and their life-changing journeys to Vermont. Featuring beautiful portraits of the former refugees and histories and photos of their home countries, Suddenly You Are Nobody enlightens and informs readers about some of those people we might otherwise pass without a glance.

Chester, overwhelmed by the fantastical events of the day and evening, stood up tall.

Locals may know Harry Goldhagen of East Fairfield for his indie films, Bridges and The Nightingale Chronicles. One of the linked novellas in this volume actually started its life as a screenplay, the author informs us in a preface. Both tales are just as steeped in Vermont atmosphere as Goldhagen's film work is — while adding a lot of wacky, maple-centric humor.

In Sapsuckers, a mad scientist's plan to squeeze more sap from the trees backfires, transforming a whole town into maple-craving vampires. The not-so-sweet antidote involves a local microbrew, apple cider vinegar and loads of Limburger cheese. In SapNet, humanity again makes the mistake of leaning too hard on the maples' generosity, this time by using "SmarTaps" to put sap lines online. The trees are not amused, and soon hybrid organic-electronic cables are snaking through the woods to snare the unwary. It's the perfect setup for Goldhagen's punch line about the travails of bringing high-speed internet to rural Vermont: "These trees may move slowly, but they still move faster than our government."

Uncommon Sense: The War on Hunger and Other Myths

Like taking a hammer to a rock, we shatter our world into pieces and study the individual shards.

This book has a second subhead: How Our Adversarial Relationship With Life Undermines Our Best Intentions. It is the most on point. In his heady, message-driven book, Jeffrey Reel writes from significant experience in spiritually focused workplaces — the Omega Institute, the Kripalu Center for Yoga & Health, and the former Kushi Institute. He also mentions a number of physical jobs he's held, from carpenter to field laborer to furniture mover.

In Uncommon Sense, the St. Johnsbury author tries on the roles of philosopher, psychologist and scientist. In a series of researched essays, he addresses evolution, technology, ecology, health, free will, conscience, history, religion and politics. A section on agricultural practices includes detailed charts of the effects of nitrogen on soil and a lengthy list of chemicals commonly used on crops.

In other words, Uncommon Sense is a bit of a brain dump. But its central message, which Reel borrows from Buckminster Fuller, remains true: "The opposite of nature is impossible."